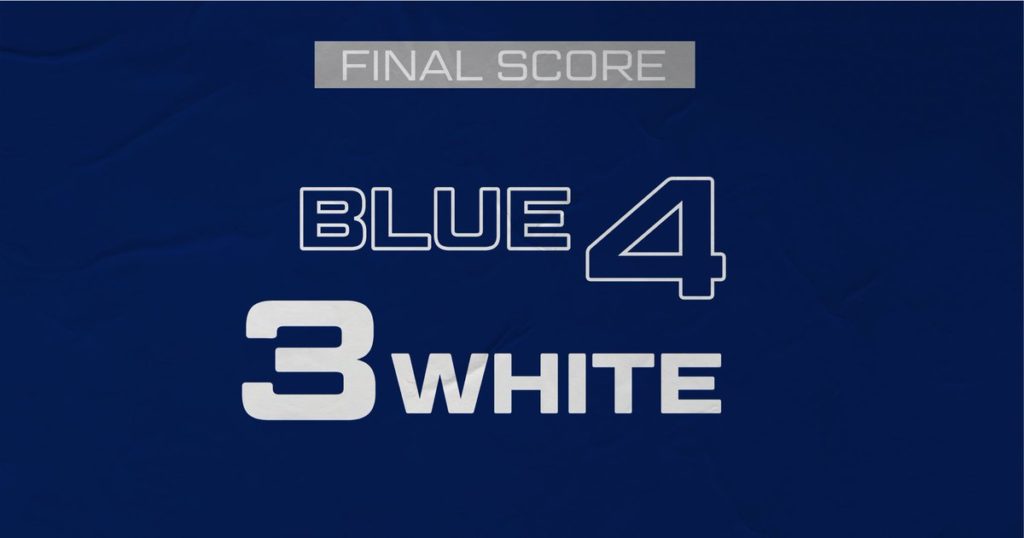 Raphael Pelletier opened the scoring early in the game when the puck bounced over a defenders stick just outside the Team White blue line. Pelletier took advantage, streaking down the right wing before firing a low shot through the five hole of Joey Rocha to give Team Blue a 1-0 lead.

Rylan Thiessen tied the game for Team White on the power play just a few minutes later. After gliding across the slot, Thiessen’s wrist shot beat a screened Jacob Herman to tie the game at one.

First was Daylan Weigel finding a loose puck in front of the net after a scramble in front, firing it home past the glove side of Rocha to restore Team Blue’s lead.

Less than 30 seconds later, Cole Nagy deflected in a wrist shot off the stick of Sam Ward to push Team Blue’s lead to 3-1. They would take that lead into the intermission, outshooting Team White 13-9 in the process.

The second period started off with some fireworks as Joey Lies and Tristan Serrao dropped the gloves just three minutes into the middle frame.

Team White pushed back in a major way in the second period, generating far more opportunities than they had in the first period. They also had a lengthy five-on-three power play, but couldn’t connect.

Brady Birnie eventually cut into Team Blue’s lead, taking a centring feed from Josh Filmon below the goal line and one timing the puck through the five hole of Herman to cut Team Blue’s lead to 3-2 after 40 minutes. Team White outshot Team Blue 13-5 in the second period.

A back-and-forth third period still saw Team Blue leading late in regulation. After some intense pressure by Team Blue, Chase Lacombe tied the game for Team White with a wrist shot from the slot with just over a minute left in regulation.

Overtime featured plenty of chances for each team, but goaltenders Rocha and Larocque came up with multiple saves to keep the game alive.

With just 19 seconds left in overtime, Jordan Borysiuk scored the winner with a hard wrist shot from the right circle over the blocker of Larocque to lift Team Blue to the 4-3 victory.

The Broncos open their pre-season schedule on Friday night when they host the Moose Jaw Warriors at 7:00.