Boston Pizza Game Recap: Broncos can’t get a bounce in loss to Rebels 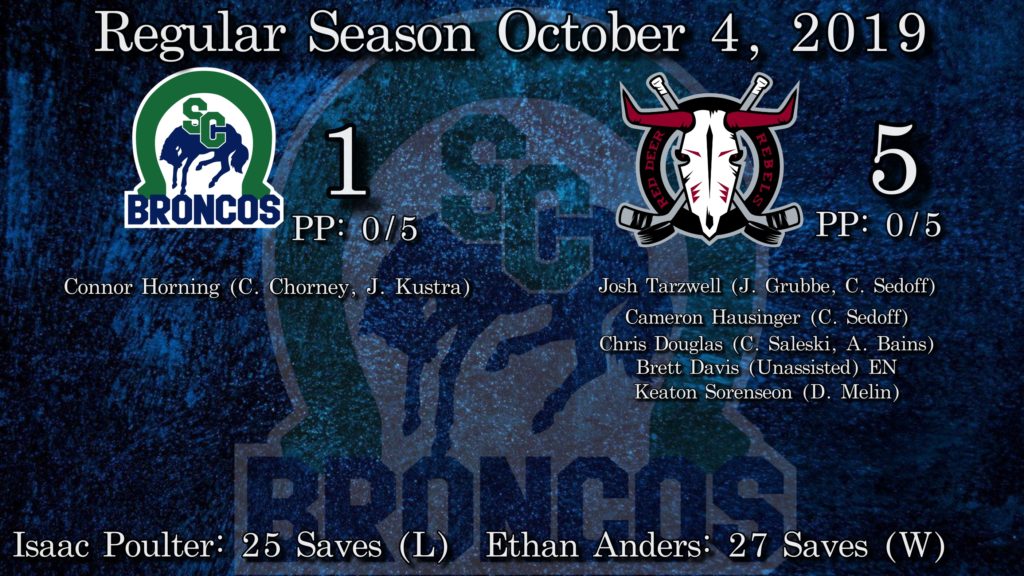 SWIFT CURRENT, SK – The Swift Current Broncos (2-3-0-0) couldn’t catch a break in a 5-1 loss to the Red Deer Rebels (3-3-0-0) Friday night, hitting multiple posts and being stymied by Ethan Anders.

Just one second after the Broncos finished off killing a 5-on-3 penalty, Josh Tarzwell found a loose puck and put it into a wide-open net 4:28 into the game.

Shortly after the goal, Kye Buchanan was robbed of his first career goal after Brandon Machado stole the puck deep in Rebels territory and centred for Buchanan, but Anders stretched out his glove hand to keep it 1-0 Red Deer.

The Broncos also hit a pair of posts from Ethan O’Rourke and Joona Kiviniemi to find themselves down 1-0 after 20.

Mid way through the second period, after a great forechecking shift by the Broncos, Carter Chorney poked the puck to the blue line for Connor Horning. Horning walked the line before letting a long wrist shot go that sailed over Anders’ blocker to tie the game at one.

Late in the frame, Brecon Wood was knocked down in the neutral zone and appeared to be in a great deal of pain, unable to get to his feet. That allowed Cameron Hausinger to skate into the Broncos zone, use the defenceman as a screen and beating Isaac Poulter on the glove side to give the Rebels a 2-1 lead.

In the final minute of the period, while shorthanded 4-on-3, Poulter made his best save of the game, sliding to his left and stacking the pads to rob Chris Douglas to keep the score 2-1 into the third.

Douglas would get his revenge in the third, scoring at the 8:44 mark to make it 3-1. Brett Davis then hit the empty net before Keaton Sorenson scored his first career WHL goal with 1:14 to go to seal the Broncos fate.

Both teams went 0-for-5 on the man advantage over the course of the game, though the Broncos took themselves off the power play on two separate occasions.

Swift Current entertains Joel Hofer and the Portland Winterhawks to the Innovation Credit Union iPlex on Wednesday, the third of a four-game homestand.