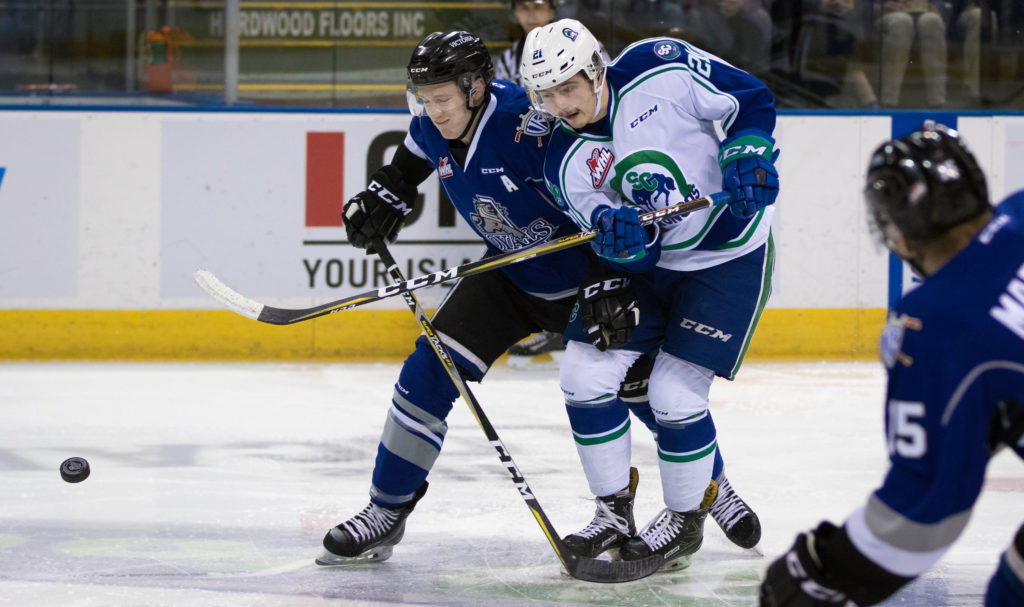 Swift Current went against another tough opponent on their B.C. road swing Wednesday night, taking on the Victoria Royals in their second of five west coast games. Rookie goaltender Isaac Poulter got the call for the Broncos and was effective in making 30 saves but the offence had troubles en route to a 5-2 defeat.

The Royals power play went to work early as Kaid Oliver tipped a Dante Hannoun shot by a screened Poulter to put Victoria up 1-0 just 3:37 into the contest.

Minutes later, the Broncos had a sixth skater on the ice as Victoria had a delayed penalty call and no power play was required as forward Joona Kiviniemi scored his first career WHL goal. The import forward from Tampere, Finland was in perfect position as the puck found his stick when teammate Max Patterson rung one off the bar.

Some history in Victoria with Joona Kiviniemi scoring his 1st @TheWHL goal. Still 1-1 mid way through the 1st. pic.twitter.com/Ep8K3BxZxJ

Victoria got their one-goal lead back when Brandon Cutler buried his fourth of the season with Hannoun collecting the lone assist. Then towards the end of the opening frame, Broncos Andrew Fyten took a tripping penalty and Hannoun scored five seconds into the man advantage from an effective offensive zone play that involved Cutler and Oliver.

Swift Current fell behind by three goals 1:20 into the second period as forward D-Jay Jerome tapped home a good pass from Oliver.

The score was 4-1 Victoria halfway through the middle period and Swift Current answered back as Owen Blocker found some open space by the left hash marks and released a low hard wrist shot through the five-hole of Royals goaltender Brock Gould.

Swift Current struggled to generate scoring chances in the final 20 minutes of regulation, totalling only three shots on goal while the Royals added one more to beat the Broncos by a final score of 5-2.

Shots on goal were 35-12 in favour of Victoria. The Broncos power play was scoreless in four tries while the Royals clicked for two goals on seven man advantages.

The B.C. road swing continues on Friday, October 19th when Swift Current hooks up with the Kamloops Blazers at the Sandman Centre. Puck drop is slated for 8:00pm MT.