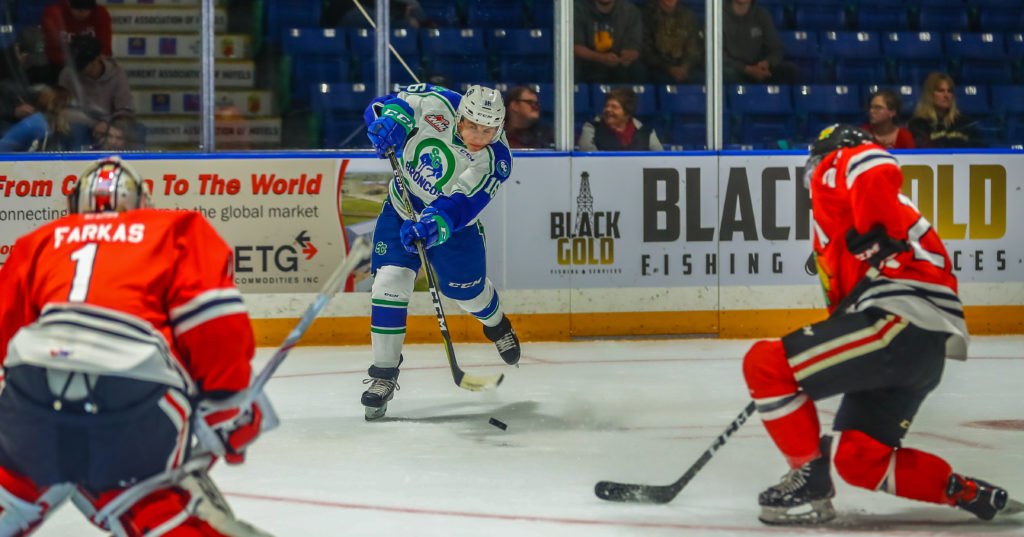 Three different goal scorers found the back of the net for the Swift Current Broncos but the Portland Winterhawks came in and scored two third period goals to break a 3-3 tie and win by a score of 5-3 on Friday evening.

Lane Gillis scored the opening goal for Portland as the native of Calgary, AB positioned himself for a partial breakaway down the right wing and beat Broncos goalie Joel Hofer with a deke move to give the Winterhawks a 1-0 margin.

The Broncos then got some offence when the Winterhawks turned the puck over in their own territory. Broncos forward Ian Briscoe picked up the loose puck and set up his line mate Ethan O’Rourke in the high slot which led to the 19-year-old netting his third of the season to tie it 1-1.

Goals came quickly for Portland as they scored a pair less than three minutes apart, with Joachim Blichfeld and Michal Kvasnica getting credit for the Winterhawks second and third goals of the period.

Matthew Culling lifted his club back within a goal to cut the deficit down to 3-2 after 20 minutes of regulation. Culling entered the zone from the right wing and released a shot from a tough angle but found just enough of an opening to place his wrist shot attempt by Winterhawks goaltender Shane Farkas. For the product of Regina, SK, the goal marked his seventh in his last nine contests.

The Broncos knotted things up at three goals apiece when Ethan Regnier potted his seventh of the season at the 2:46 mark of the second. Rookie defenceman Alex Moar picked up the lone assist.

The game remained fairly tight until it got away from the Broncos in the third period when Jaydon Dureau scored midway through the third period to put Portland up for good the rest of the way.

Swift Current pulled Hofer for the extra attacker with 60 seconds left but Portland’s Jake Gricius tacked on an empty netter to make it a 5-3 final.

Shots on goal were 48-23 in favour of Portland. The Winterhawks power play went 0/3 while the Broncos finished 0/2 on the man advantage.

Swift Current returns to the ice immediately for another home game as they will tilt against the Regina Pats at the Innovation Credit Union i-Plex on Saturday, January 5th. Puck drop is set for 7:00pm CT.