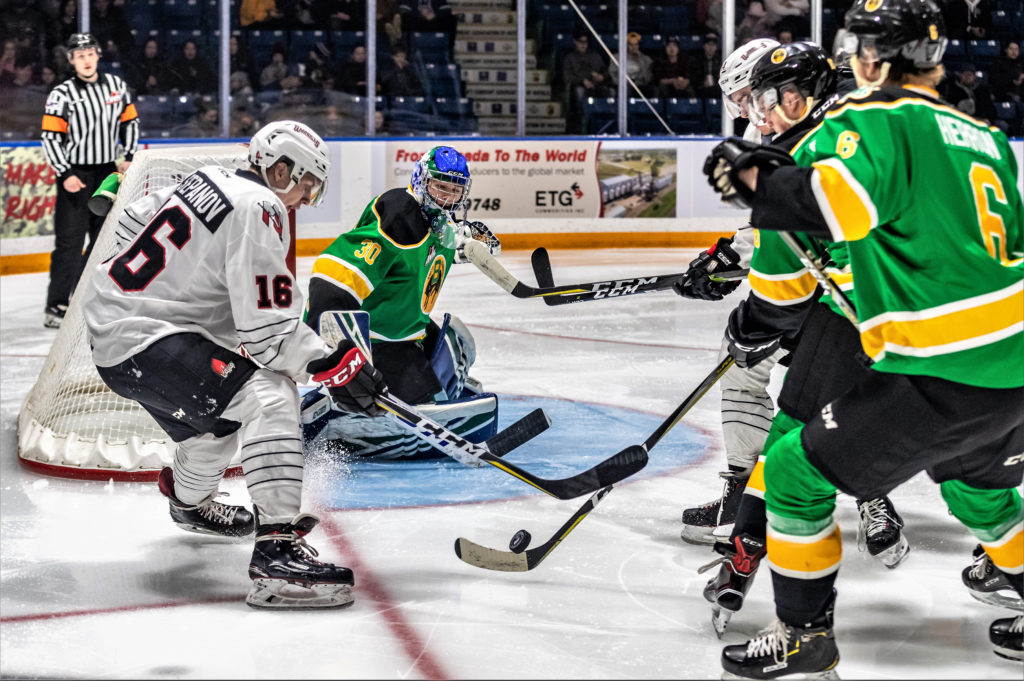 Excitement filled the air on Friday night as the Swift Current Broncos and Moose Jaw Warriors met again less than 24 hours after the Broncos edged their East Division rivals 4-3 at Mosaic Place the night before.

Broncos forward Ethan Regnier boosted the energy for the 2,768 in attendance as he picked the corner on Warriors netminder Adam Evanoff 1:27 from opening faceoff to give Swift Current an early 1-0 advantage.

2-0 was the score four minutes later as Alec Zawatsky patiently netted his 12th of the season. Ben King and Regnier gathered assists on the play.

The Broncos were 19 seconds away from going to the intermission with their 2-0 margin but the Warriors got one on the board as Daemon Hunt placed a perfect shot by Broncos netminder Joel Hofer.

Moose Jaw tied it early in the second period as a broken down play near the Broncos crease led to a goal from Justin Almeida 41 seconds in.

Swift Current restored their lead as Matthew Culling stayed hot, netting his second goal in as many nights to make it a 3-2 game. Stanley picked up an assist while King tallied his second helper of the night.

The Warriors kept up pressure and it led to forward Tristin Langan collecting his 25th of the season at the 15:40 mark of the frame. The score was knotted 3-3 after 40 minutes of play while shots on goal were fairly close, 23-19 for Moose Jaw.

Swift Current landed some penalty trouble in the third, taking back to back minor infractions. Hofer and the penalty kill units did a great job in blocking passing lanes and limiting the Warriors to only a pair of shots on goal.

For the second straight night, overtime was required as the score read 3-3 and this time, the Warriors prevailed in overtime as Langan buried the winner when Moose Jaw was on a 4-on-3 man advantage.

Shots on goal were 39-27 in favour of Moose Jaw. The Warriors power play went 1/5 while the Broncos power play finished 0/5.

Swift Current closes out the month of December on Sunday afternoon when the Saskatoon Blades come to town for the club’s first meeting since opening week back in September. Puck drop is set for 4:00pm CT.