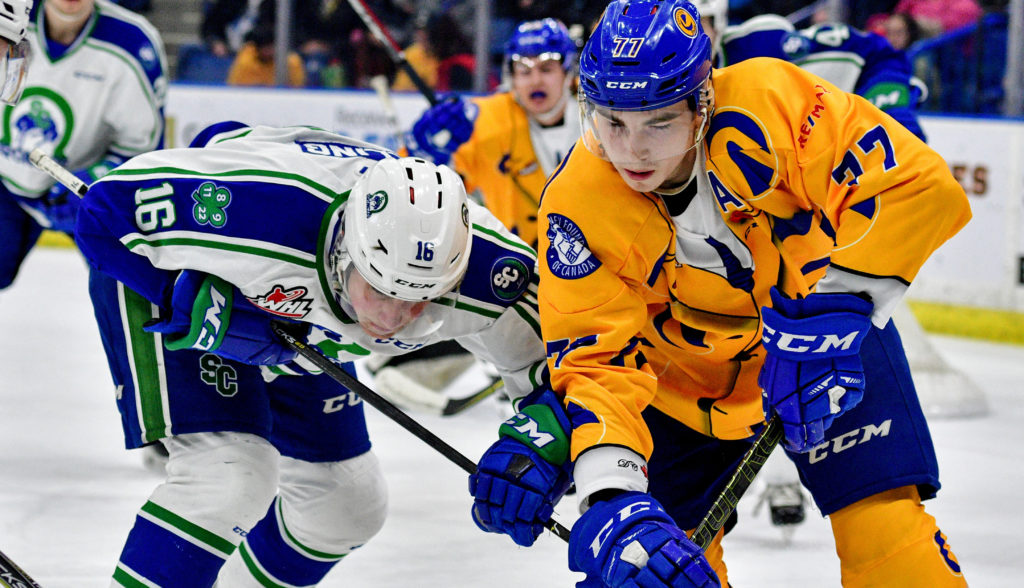 A lengthy seven-game road trip for the Swift Current Broncos came to an end on Saturday night against the Saskatoon Blades at the SaskTel Centre. Swift Current’s goal scoring drought ended with a third period goal from Matthew Culling, however the Broncos dropped to the Blades 6-1.

The Broncos played a strong first period as their team defence limited the Blades to only eight shots on goal with 20-year-old goaltender Riley Lamb denying all eight sent his direction.

It took until the 6:43 mark of the second period for the game’s first goal which came on a Saskatoon man advantage. Tristen Robins picked up a rebound off an initial shot from line mate Eric Florchuk and tucked it by Lamb to give Saskatoon a 1-0 lead.

Kristian Roykas Marthinsen increased the Saskatoon lead to 2-0 less than a minute later and it became a 3-0 score before the second period was up. Blades forward Ryan Hughes finished off a two-on-one break with Riley McKay when he received a cross-ice pass by Broncos blue liner Billy Sowa who tried to block the pass and beat an outstretched Lamb.

Hughes potted his second of the game seven seconds into the third period courtesy of a clean shot from the left wing when entering the Swift Current zone. Blades defenceman Dawson Davidson grew Saskatoon’s lead to 5-0 later in the third but the Broncos did snap the scoreless drought when Matthew Culling redirected an Ian Briscoe shot by Blades goalie Dorrin Luding.

Kirby Dach recorded his 25th of the season to round out the goal scoring for Saskatoon.

Shots on goal were 47-17 in favour of Saskatoon. The Broncos power play went 0/3 while the Blades netted one power play marker on three opportunities.

Swift Current finished their seven-game road trip without a victory, posting an 0-6-1 record but will look to get back in the win column at the Innovation Credit Union I-Plex on Sunday afternoon vs. the East Division leading Prince Albert Raiders. Puck drop is set for 4:00pm CT.