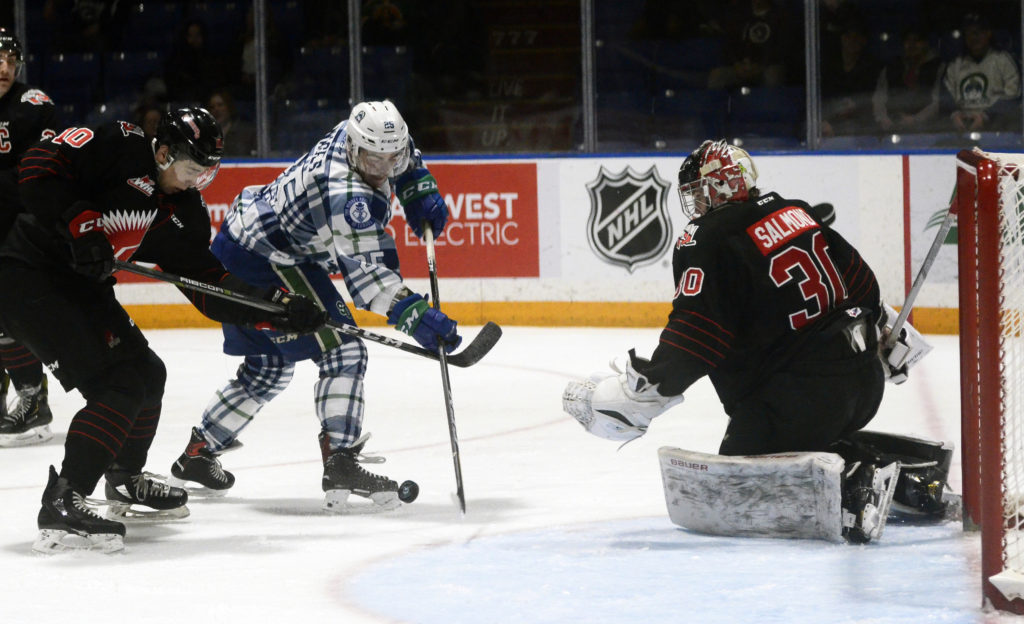 Don Cherry themed jerseys were in the barn Friday night as the Swift Current Broncos met up with the Moose Jaw Warriors on ‘WHL Suits Up with Don Cherry to Promote Organ Donation as presented by RE/MAX.’

Ethan Regnier put the Broncos ahead 1-0 on an early power play opportunity 5:12 into the tilt. Joona Kiviniemi and Connor Horning drew assists on the goal.

The Warriors countered back on a man advantage of their own as Justin Almeida registered his 24th of the season.

Shots on goal were a commanding 14-2 in favour of Moose Jaw and the visiting team went ahead 2-1 when Tristin Langan scored a power play marker in the middle grame.

Broncos captain Tanner Nagel punched one back for Swift Current as he fought his way for a rebound opportunity in the Warriors crease and banged in his 11th of the year to draw the score 2-2.

A Too Many Men penalty called against the Broncos with under nine minutes left in the third period proved to be costly and the difference maker. Moose Jaw’s Brayden Tracey took a long pass from Justin Almeida while stationed backdoor by the Broncos crease and his shot got by a sprawling Riley Lamb to break the deadlock and make it 3-2 Warriors.

Tracey then recorded a late empty net goal when the Broncos pulled Lamb for the extra attacker, pushing Moose Jaw to a 4-2 win.

Kiviniemi and Horning each collected two assists in a losing cause.

Shots on goal were 37-13 in favour of Moose Jaw. The Warriors clicked for three power play goals on four attempts while the Broncos did a good job in recording two on the man advantage over three chances.

No time to dwell on the loss for the Broncos as they head back to game action immediately on Saturday night when they welcome the Calgary Hitmen to the Innovation Credit Union I-Plex. Puck drop is set for 7:00pm CT.