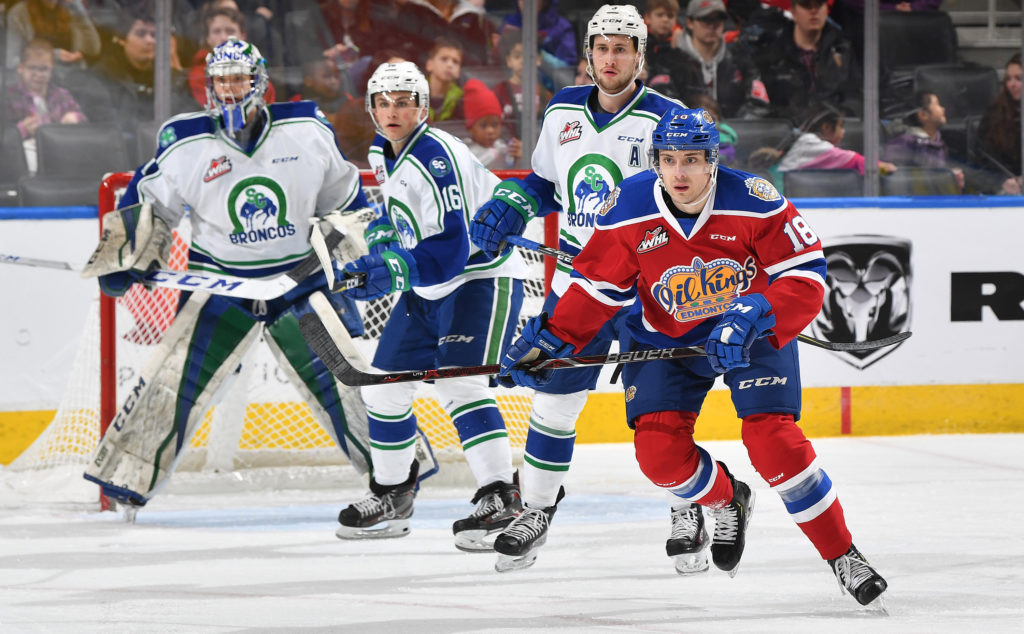 One to forget for the Swift Current Broncos as their road trip started off on the wrong foot, losing to the Edmonton Oil Kings by an 11-1 score at Rogers Place on Tuesday.

Swift Current pounced early for the game’s first goal as the Oil Kings’ Todd Scott turned over the puck when he had a chance to cover it, eventually leading to Tanner Nagel smacking in the Broncos first goal.

The lead was short-lived as a Broncos penalty led to David Kope netting a power play marker to even it 1-1.

Former Swift Current Broncos forward Andrew Fyten gave Edmonton a 2-1 lead at the 13:10 mark of the period. From the side boards in Broncos territory, Trey Fix-Wolansky sauced a behind the back pass to the 20-year-old Fyten in the slot and he roofed it over the shoulder of Broncos goaltender Isaac Poulter.

38 seconds later, Oil Kings forward Jake Neighbours released a low shot that Poulter got a piece of but the puck crossed the line and it was 3-1 Edmonton. Riley Lamb entered the game in relief of Poulter, however Edmonton completed a four-goal first period when Vladimir Alistrov recorded his 11th of the season.

The Broncos had trouble staying out of the penalty box in the second period, taking four minor infractions and the Oil Kings scored a pair of power play goals to grow the deficit to 6-1. Fyten picked up his second of the game while Josh Williams netted the other.

Kope chipped in with his second of the game as Swift Current stared at a 7-1 deficit heading to the third period.

The Broncos will take another shot at it on Wednesday afternoon when they battle the Calgary Hitmen at the Scotiabank Saddledome. Puck drop is set for 12:00pm CT/11:00am MT.