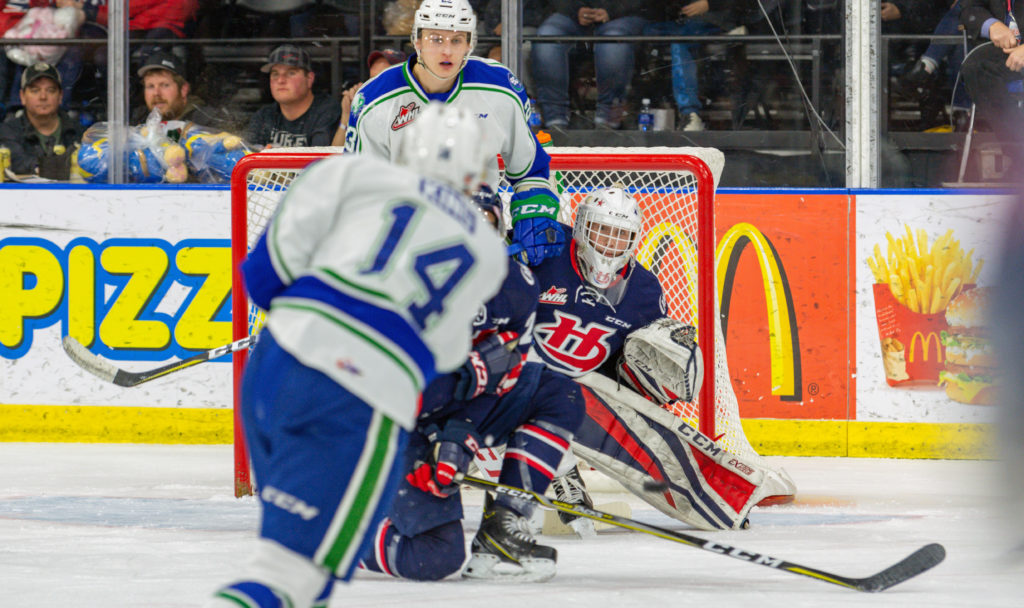 A quick day trip out west saw the Swift Current Broncos battle the Lethbridge Hurricanes for the second of four regular season meetings. It was Teddy Bear Toss night at the ENMAX Centre and although it was a 1-1 score halfway through the matchup, the Broncos were defeated 3-1.

Lethbridge scored the game’s first goal 4:07 into the second period as Justin Hall squeaked one by Broncos goaltender Joel Hofer who got a piece of his shot but not enough. The goal led to a flurry of teddy bears to be tossed on the ice in traditional format as the collected bears are to be donated to charities for the holiday season.

Swift Current’s Alec Zawatsky made an exceptional play off a faceoff in Canes territory midway through the middle frame. The 19-year-old forward gathered the puck to himself in winning the faceoff and then used his on-ice vision to make a quick pass to Max Patterson who was parked back door in the Hurricanes crease. The 6’5″, 202lb forward banged one by Canes’ backstopper Carl Tetachuk to knot it 1-1.

The pace of play was getting feisty and physical as the Broncos’ Andrew Fyten received a two-minute boarding penalty that led to scuffle involving several Swift Current and Lethbridge skaters but no additional penalties were handed out.

Jake Elmer grew the Canes lead to 3-1 when he reached for the puck at the side of the Bronco goal, brought it out front and tucked it in. Hofer went to the bench for the extra attacker but the offence couldn’t draw closer as 3-1 was the final outcome.

Shots on goal were 42-26 in favour of Lethbridge. The Broncos penalty kill play was solid as they shutout the Hurricanes on their four power play attempts.

Swift Current returns home to battle the Brandon Wheat Kings at home for the second time in a four-day span on Saturday, December 1st for Teddy Bear Toss night presented by Pattison Agriculture. Puck drop is set for 7:00pm CT.