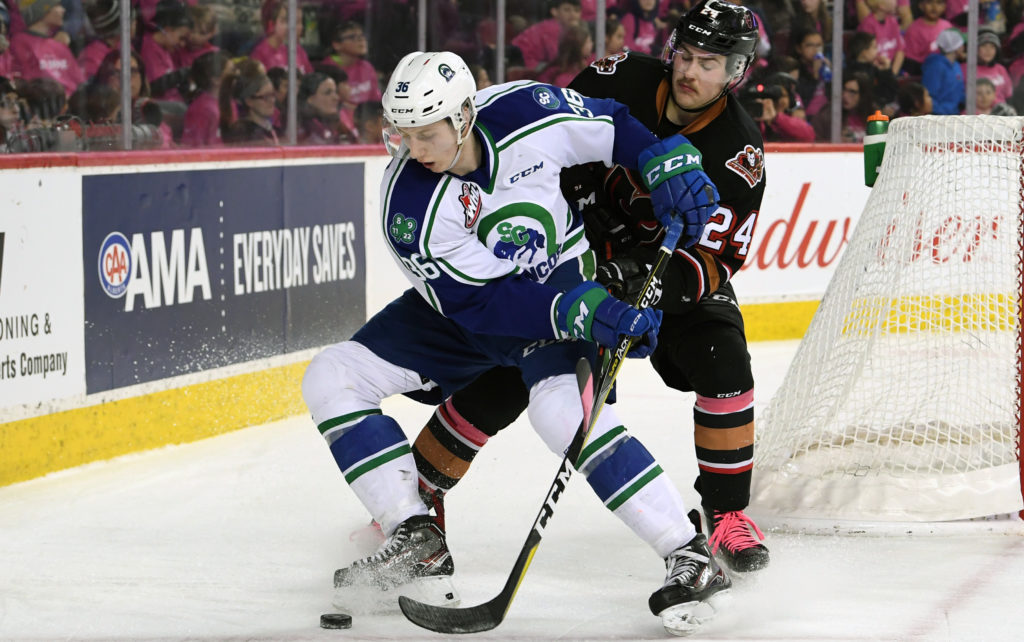 A day after the Swift Current Broncos were downed by the Edmonton Oil Kings on Tuesday afternoon, the team was back for another matinee outing against the Calgary Hitmen on Wednesday. Former Swift Current Broncos forward Kaden Elder recorded his first hat trick as the Broncos losing skid continued with a 9-3 loss to the Hitmen at the Scotiabank Saddledome.

The teams traded goals early and often as the Hitmen’s Focht scored 4:06 into the game while the Broncos’ Carter Chorney got his team on the score board a minute later.

Evened at one goal apiece, Elder then put the Hitmen back ahead 2-1 and that was followed by Focht netting his second of the afternoon.

Connor Horning capped off a nice three-on-two rush featuring Tanner Nagel and Chorney to push the Broncos back within a single goal before the first intermission. The 17-year-old received a cross-ice pass from Chorney and he wired a wrist shot far side by a sprawled Jack McNaughton in the Hitmen crease.

The second period was not pretty for the Broncos as Focht scored just 29 seconds into the frame to give Calgary a 4-2 lead. Elder then increased Calgary’s advantage to 5-2 when his low backhander from the low slot beat Broncos goaltender Isaac Poulter five-hole.

Broncos forward Matthew Culling lasered home his ninth of the season at the 2:10 mark of the third period when he made use of a Hitmen turnover at the Calgary blue line, skated down the right wing and zipped it by the glove hand of McNaughton. Chorney was awarded an assist for his third point of the day.

Recent penalty killing problems for Swift Current carried over as Elder and Focht captured their third and fourth goals of the game respectively on separate power play opportunities.

Shots on goal were 32-14 in favour of Swift Current. The Broncos power play was scoreless on three tries while the Hitmen clicked for a pair on five man advantages.

The Broncos have now lost 12 consecutive games and will look to snap their losing skid on Friday, March 1st against the Kootenay ICE. Puck drop is slated for 8:00pm CT/7:00pm MT.