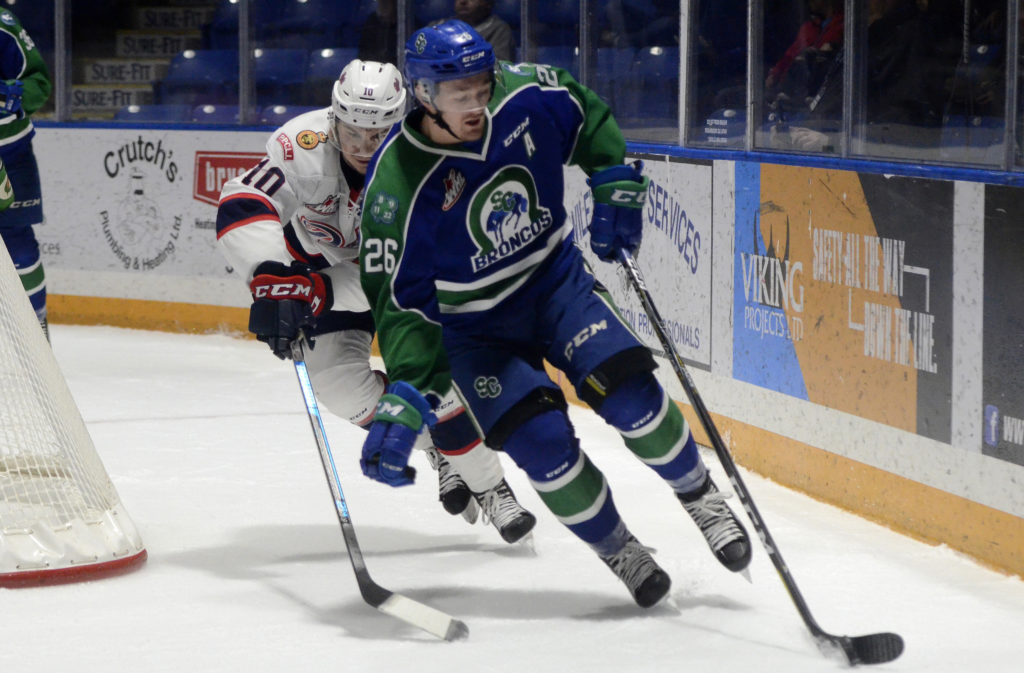 The Swift Current Broncos looked to reverse their fortunes against the Regina Pats as they entered Wednesday night’s matchup with an 0-3-0 record in three prior regular season matchups. Andrew Fyten and the Broncos got revenge as they erased a one-goal deficit in the third period to come back and snatch a 4-3 victory.

Pats forward Scott Mahovlich recorded the game’s opening goal as he batted a bouncing puck in the Broncos crease through goaltender Joel Hofer midway through the first period.

Regina doubled their cushion to 2-0 when Brett Clayton pocketed his third of the season while the Pats were performing fore-checking pressure in the Broncos end of the ice.

In the second period,  20-year-old Swift Current forward Andrew Fyten was rewarded his seventh marker of the season when he came barreling down the left wing, skated hard to the net and slipped one by Pats goalie Max Paddock before being taken out of the play with the net being knocked off. The play went under video review and was deemed a good goal.

It appeared that the momentum was changing in favour of Swift Current, however the Pats’ Riley Krane hauled that when he scored a few minutes later to give Regina their two-goal lead back at 3-1.

Fyten was up to his bag of tricks again as he deposited his second goal of the game on a terrific individual play. The Sundre, AB product went coast to coast, completed a toe drag move and went upstairs on Paddock to help claw the Broncos within a single goal.

A terrific hockey play from Broncos forward Joona Kiviniemi saw the Finnish forward score the game-tying-goal at the 11:18 mark of the third period. The rookie swept around the Pats defender using his body to shield the puck and then he snuck it by Paddock. Ben King and Garrett Sambrook collected the assists on the play.

Tanner Nagel gave the Broncos a 4-3 lead as he gained possession of the puck in Bronco territory, zoomed up the left wing and buried the eventual game winner.

Shots on goal ended up finishing at 39-37 in favour of Regina. The Broncos power play unit went 1/3 on the man advantage while the Pats were shutout, going 0/4.

The Broncos will finish off the first half of the 2018-19 campaign with a home-and-home set against the #1 ranked club in the CHL, the Prince Albert Raiders. The first game is set to occur on Friday, December 14th at the Innovation Credit Union I-Plex with puck drop slated for 7:00pm CT.