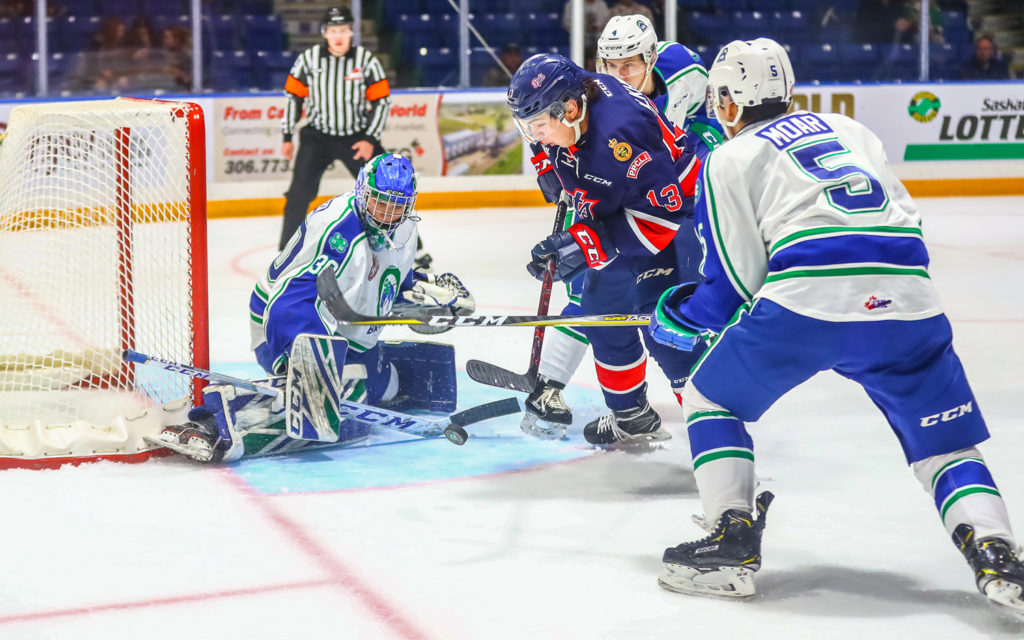 St. Louis Blues prospect Joel Hofer was sensational on Saturday night as the 18-year-old netminder went to his bag of tricks and pulled out a brilliant 46 save outing as the Swift Current Broncos squeaked by the Regina Pats by a score of 1-0.

While Swift Current was on their first man advantage of the game in the first period, the home team took advantage and netted their first goal of the night as Carter Chorney recorded his second goal as a Bronco and 10th overall on the season. . Billy Sowa and Alec Zawatsky registered assists on the play.

A Pats vs. Broncos divisional rivalry game isn’t complete unless some physical play occurs and that’s what happened throughout the second period as both teams were tossing bodies around and committing good hits. A fight ensued between the Broncos’ Matt Stanley and Pats’ Kyle Walker 10:06 into the second with both players trading punches before landing in the penalty box to serve five minute fighting majors.

Hofer held the fort down for the Broncos as he stopped 29 shots sent his direction through two periods of action and his stellar play continued in the third period.

The Winnipeg, MB product had 17 more Pats shots sent his way, including a few key scoring moments on an early third period Pats man advantage and Hofer denied every single puck he saw.

Hofer finished the night with 46 saves to earn his second career WHL shutout in a 1-0 Broncos victory.

Shots on goal were 46-24 in favour of Regina. The Pats power play went 0/3 while the Broncos finished the night 1/5.