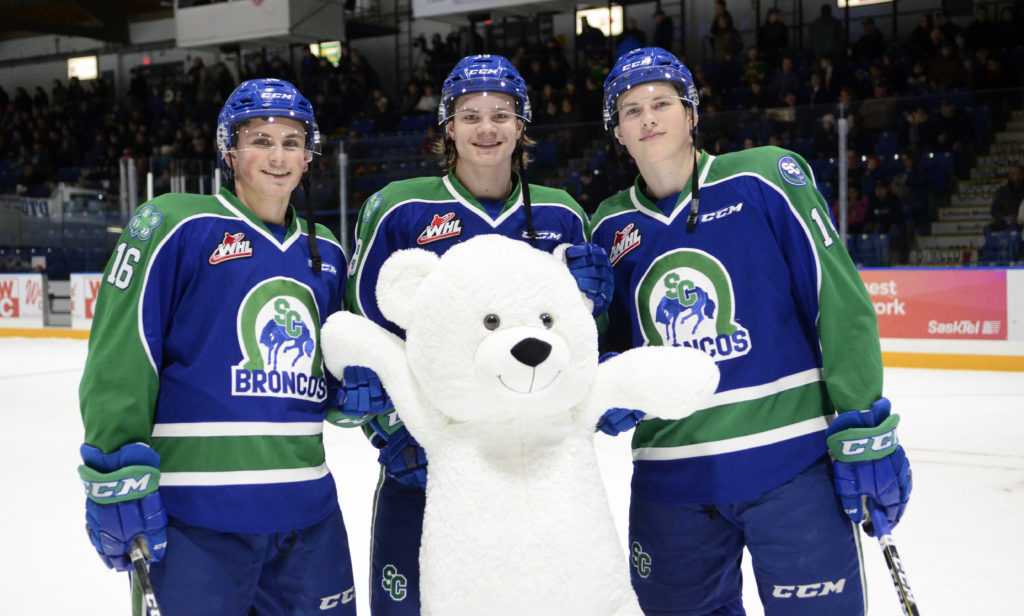 It was Teddy Bear Toss night presented by Pattison Agriculture as the Broncos hosted the Brandon Wheat Kings for the second time in less than a week to begin their December slate.

The Broncos gave up the first goal of the game three minutes into the contest as Wheat Kings forward Linden McCorrister deflected in a power play tally to make it 1-0 Brandon.

At the 15:36 mark of the first, Broncos rookie Matt Culling found a streaking Joona Kiviniemi on an offensive rush and the Finnish Import buried it for his fifth of the season to tie it 1-1 and it triggered the Teddy Bears to flood the ice as fans tossed stuffed animals, mitts and toques on the ice in a mighty celebration.

Wheat Kings captain Stelio Mattheos picked the low corner by goaltender Joel Hofer to give Brandon a 2-1 margin under six minutes left in the second.

Sometimes in hockey, good things can happen when you put the puck on net and that happened for Swift Current as Sundre, AB product Andrew Fyten threw the puck towards the Wheat Kings goal from the corner and it deflected up and over netminder Jiri Patera to draw the game at twos.

Swift Current stayed competitive all game against Brandon but a tough 1:38 span midway through the third saw the visiting team net three goals to put it out of reach.

McCorrister buried the Wheat Kings third power play marker of the night when Ben King was serving a two-minute minor for hooking.

A Bronco turnover led to a Brandon insurance marker from forward Ridly Greig and that was followed by McCorrister completing the hat trick to deliver the Broncos a 5-2 loss.

Shots on goal were 35-33 in favour of Brandon. The Wheat Kings power play clicked for three goals on seven tries while the Broncos went 0/2.

Swift Current goes up against the WHL’s best club to date, the Prince Albert Raiders at the Innovation Credit Union i-Plex on Tuesday, December 4th at home. Puck drop is set for 7:00pm CT.