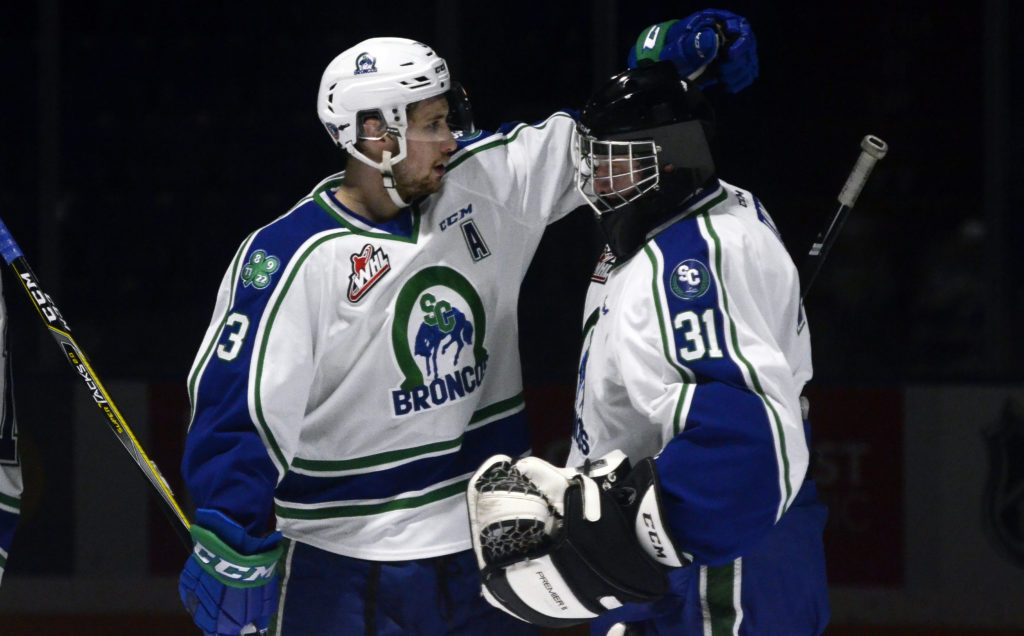 After joining the Swift Current Broncos earlier this week, goaltender Riley Lamb made his Broncos debut and was terrific from beginning to end for Swift Current in their Sunday afternoon affair vs. the Brandon Wheat Kings. Lamb clocked in a 47-save performance to lead the Broncos to a 4-2 victory over the Wheat Kings at the Innovation Credit Union i-Plex.

A special moment happened for 19-year-old forward Ian Briscoe as he netted his first goal as a Swift Current Bronco to give the home team a 1-0 lead. Centerman Ethan O’Rourke won an offensive zone faceoff towards Briscoe and he snapped it by Wheat Kings goaltender Ethan Kruger.

Zach Wytinck tied it up for the visiting Wheat Kings with Ben McCartney and Connor Gutenberg registering assists.

At the 17:23 mark of the first, the Wheat Kings Caiden Daley took an interference penalty and the Broncos wasted no time in capitalizing as O’Rourke received a centering ice pass from Briscoe and deposited his fourth of the season. Garrett Sambrook drew the other assist on the O’Rourke goal.

Halfway through the second period, Wheat Kings forward Luka Burzan earned his 25th goal of the season on a Brandon power play to once again draw the East Division foes even at two goals apiece.

The tie did not last long as the Broncos made use of a power play of their own a mere two minutes later. Rookie defenceman Alex Moar gained possession of the puck at the top of the point, found a little bit of open ice right in front him so the 17-year-old stepped into a hard wrist shot and picked the corner to give Swift Current a 3-2 nod.

The 20-year-old Lamb was being steady in his first start as a Bronco, registering 31 saves when the second period expired.

Swift Current got the insurance they needed as team captain Tanner Nagel scored his second goal in as many nights to propel the Broncos ahead 4-2.

Lamb did the rest as the Rivers, MB product stopped an additional 16 shots to finish the game with 47 saves and earn first star honours.

Shots on goal were 49-24 in favour of Brandon. The Wheat Kings power play went 1/5 while the Broncos man advantage lit the lamp twice on three tries.

Next up for Swift Current is a home date against the Kootenay ICE on Tuesday, January 15th on Two-For-One Tuesdays at the Innovation Credit Union i-Plex. Puck drop is at 7:00pm CT.