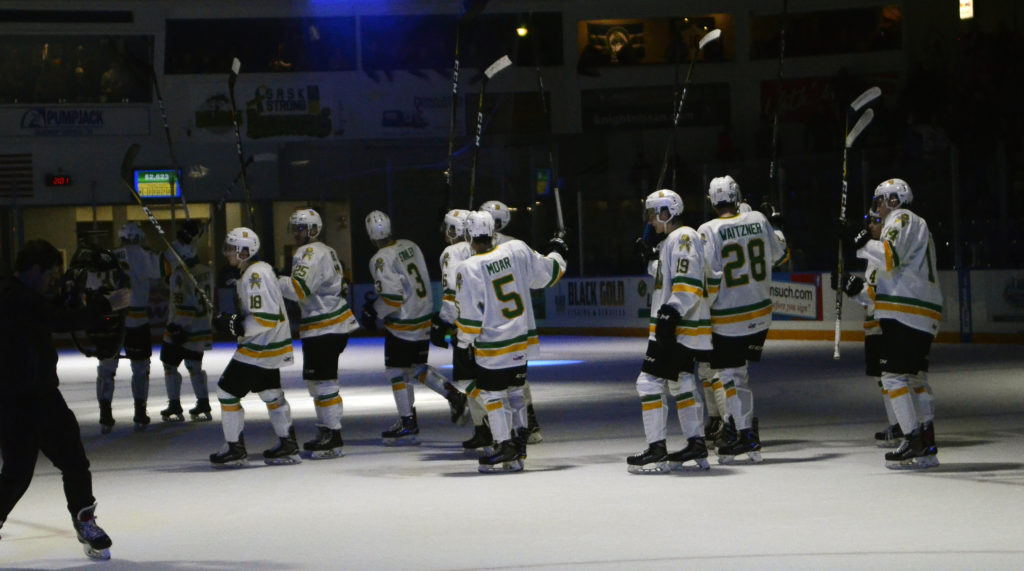 Bronco Strong night from start to finish was similar to a terrific story that displayed its ups and downs but ended off with a satisfying ending and that’s what happened on Friday evening as the Swift Current Broncos edged the Lethbridge Hurricanes 5-4 in overtime.

Calen Addison scored first for the Canes at the 11:12 mark of the first when he walked in from the point and snuck a high wrist shot by Broncos goaltender Joel Hofer.

Lethbridge kept coming as forward Noah Boyko scored an unassisted marker to extend the lead to 2-0 Canes but the Broncos got one back before the period expired.

Max Patterson parked himself in front of the Canes net and redirected in his third of the season with 11 seconds remaining in the opening period.

Lethbridge did get their third of the game when Jadon Joseph redirected Logan Barlage’s shot off the far post and in to make it a 3-1 game.

20-year-old forward Andrew Fyten responded for Swift Current at the 13:36 mark of the second period, scoring just 54 seconds after the goal from Joseph to get the home team back within one. Shots on goal favoured Swift Current 28-25 going to the third period.

In the third, rookie forward Ben King used excellent hand-eye coordination to smack the puck out of midair a few feet from the crease and into the back of the net to draw even 3-3.

Lethbridge was on a power play late in the game when Broncos defenceman Matt Stanley took a delay of game penalty, resulting in Ty Colle scoring with less than three minutes on the clock.

Swift Current fought hard and continued to push right to the end and it paid off as 17-year-old rear guard Connor Horning tied it up 4-4 on a Bronco man advantage courtesy of a good seeing-eye shot from the point. Alex Moar earned the primary assist in what was his first game suited up as a Bronco after being acquired via trade with the Everett Silvertips.

The storybook ending was complete in overtime as defenceman Noah King buried the overtime winner 2:59 into extra time to deliver the Broncos a thrilling come from behind 5-4 victory on Bronco Strong night.

Shots on goal were 46-40 in favour of Lethbridge. The Canes power play went 2/4 while the Broncos finished the night 1/4.

The Broncos get right back at it on Saturday, November 3rd when they welcome the Edmonton Oil Kings to the Innovation Credit Union i-Plex. Puck drop is set for 7:00pm MT.