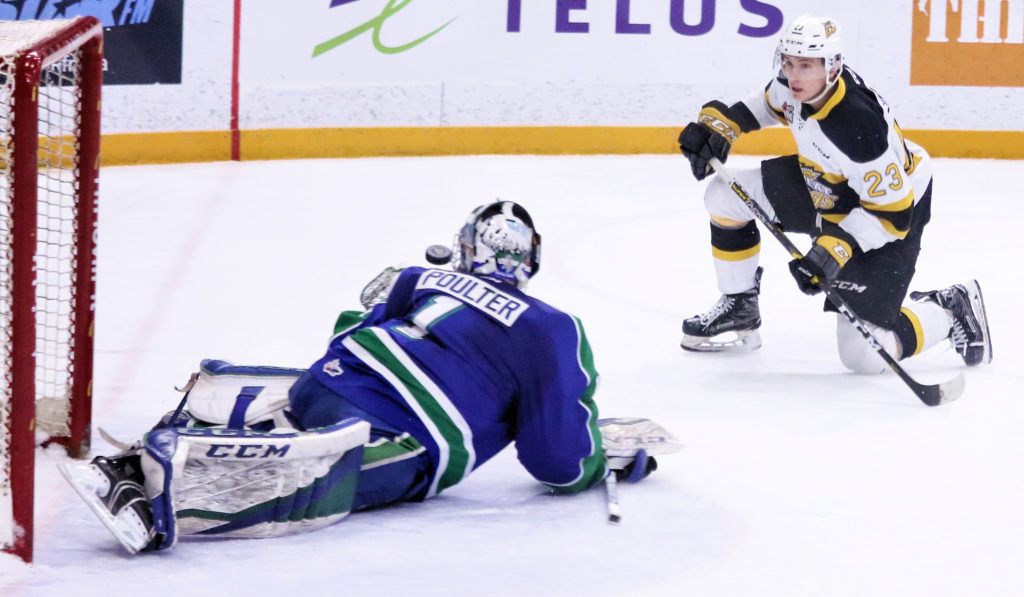 The Swift Current Broncos and Brandon Wheat Kings met on Family Day Monday for their sixth and final meeting of the 2018-19 regular season and 60 minutes of play wasn’t enough as the Broncos forced overtime but ultimately fell to the Wheat Kings 3-2.

Swift Current got on the board halfway through the first period as Winnipeg, MB product Ian Briscoe redirected in his third of the season while parked in front of the Wheat Kings net. Defenceman Garrett Sambrook kept the puck in along the right boards and committed a wrist shot on goal that went off Briscoe’s foot and in to make it 1-0 Broncos.

Midway through the second period with the Broncos still up 1-0, the visitors had an opportunity to double their lead with a power play chance after the Wheat Kings’ Ben McCartney got a hooking penalty. The Broncos failed to score on the man advantage and Brandon tied it minutes later as Jonny Hooker buried a bouncing puck loose in the Broncos crease after a flurry in front.

Owen Blocker pushed back for the Broncos, burying his fifth of the season from a good wrist shot that went off the crossbar and in. Billy Sowa dropped off a pass to Blocker in Wheat Kings territory, setting up Blocker with open space for the shot.

Brandon’s Luka Burzan drew the home team even when he skated out from behind the Broncos cage and swept a shot across the crease and in far side. The goal came during a third period power play chance.

Overtime was needed to determine a winner as the Broncos goaltender Isaac Poulter registered 15 third period saves to help his club force the extra frame.

Cole Reinhardt ended up scoring the winner for the Wheat Kings, handing the Broncos a 3-2 defeat.

Shots on goal were 42-14 in favour of Brandon. The Broncos went 0/2 on the power play while the Wheat Kings finished the afternoon 1/3.

The Broncos will return to the i-Plex for a pair of home games this weekend, the first being against the Moose Jaw Warriors on Friday, February 22nd for ‘WHL Suits Up with Don Cherry to Promote Organ Donation presented by RE/MAX’ night. The players will be sporting a special Don Cherry inspired game jersey that evening when they take the ice. Puck drop is set for 7:00pm CT.