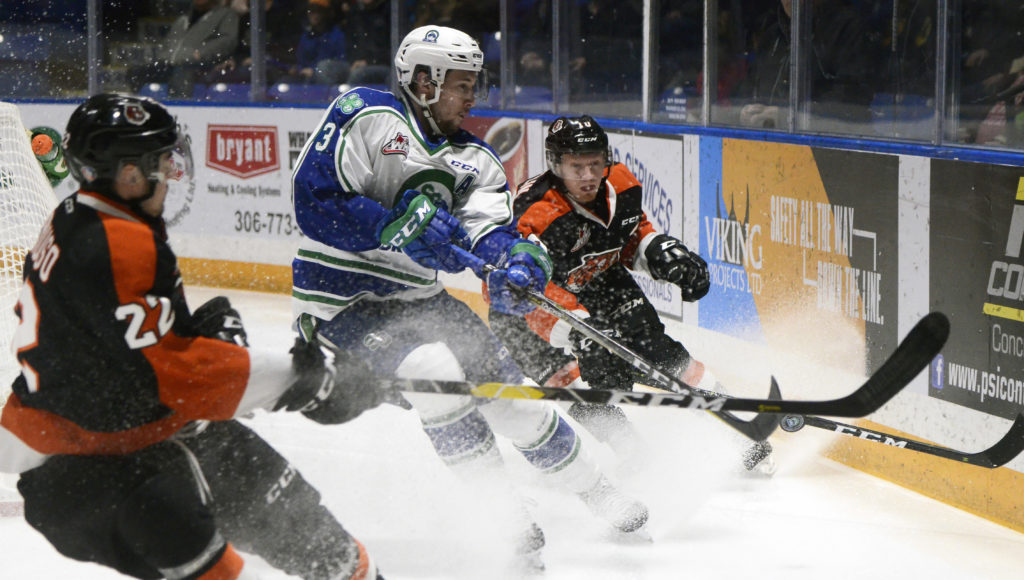 Goal scoring continues to be a bit of a struggle for the Broncos as forward Ethan O’Rourke scored the lone goal in a 3-1 loss to the Medicine Hat Tigers on Friday night.

Through one period of play, Broncos goaltender Riley Lamb clearly picked up where he left off after his 47 save performance last week against the Brandon Wheat Kings with a 19 save effort to keep this contest tied 0-0.

It wasn’t until the 6:35 mark of the second period when Medicine Hat team captain James Hamblin scored his 24th of the season to give the Tigers a 1-0 lead. Forward Tyler Preziuso attempted a cross ice feed that saw the puck pop up into the air and Hamblin used good hand-eye coordination to bat it in mid air.

Tigers forward Corson Hopwo then boosted their lead to 2-0 as Hamblin notched an assist for his second point of the night while Linus Nassen earned a helper as well.

Trevor Longo blasted one from the point in the third period to place the Broncos in a 3-0 hole.

19-year-old Broncos forward O’Rourke broke the scoring drought as he scooped up a pass from Garrett Sambrook in the slot area and created some open space before firing a high wrist shot over Tigers goaltender Jordan Hollett.

3-1 Tigers was the score when Swift Current pulled goaltender Lamb for the extra attacker. The Tigers stingy defence prevented any quality scoring chances for the Broncos, thus 3-1 ended up being the final outcome.

Shots on goal were 46-24 in favour of Medicine Hat. Both clubs were 0/1 on the power play.

Swift Current finished their seven-game home stand, posting a record of 2-5-0-0 and will battle the Tigers again on Saturday night at the Canalta Centre. Puck drop is set for 8:30pm CT.