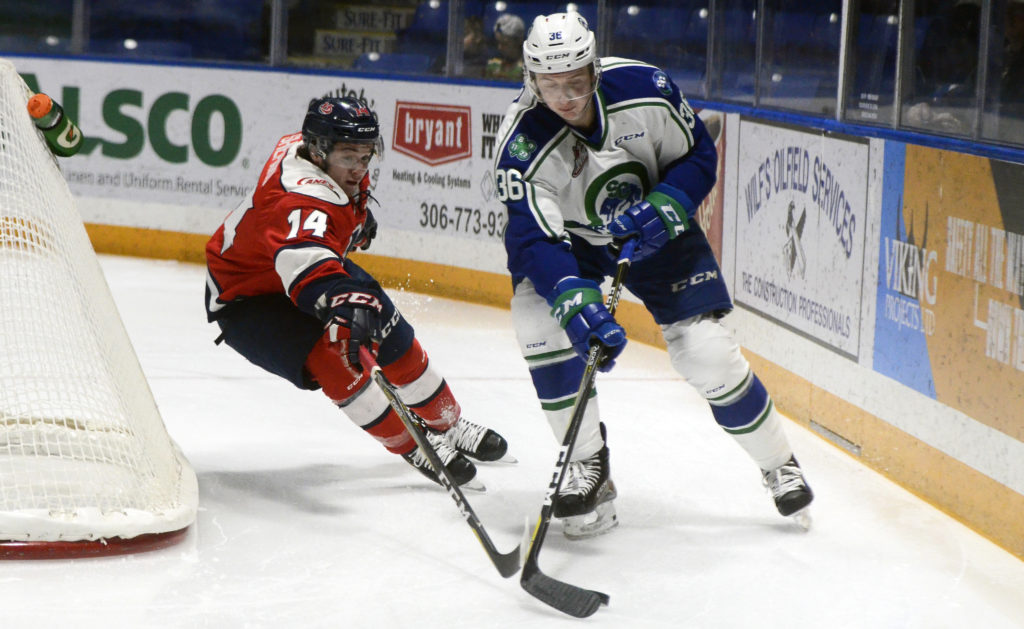 A slow start by the Swift Current Broncos saw the club down three goals in the first period en route to a 7-2 loss to the hands of the Lethbridge Hurricanes on Friday night at the Innovation Credit Union i-Plex.

A flurry of early scoring chances for the visiting Lethbridge Hurricanes led to a couple of goals by forward Jake Elmer. A product of Calgary, AB, Elmer scored his first goal from the low slot when his team mate Alex Cotton found him with open space in the slot and completed a slap pass to him.

Elmer than his netted his second goal on a shorthanded breakaway attempt after a Broncos turnover near the blue line.

Former Swift Current Broncos forward Logan Barlage than made it a 3-0 score for Lethbridge a couple minutes later with Cotton and Taylor Ross registering helpers on the goal.

Swift Current got on the board 43 seconds later when Carter Chorney deflected a Garret Sambrook point shot by goaltender Bryan Thomson. The goal from Chorney marked his 12th of the season and it got the Broncos back within a pair of goals on the score board.

Lethbridge however restored their three-goal margin when Nick Henry buried his 21st of the season and the score was 4-1 at the first intermission horn.

It got worse for the Broncos as Lethbridge netted their fifth goal of the night after Noah Boyko scored his sixth of the season.

The Broncos did light the lamp before the second intermission however as sophomore blue liner Connor Horning executed a terrific individual play to patiently find open ice and slide one by Hurricanes goaltender Bryan Thomson to make it a 5-2 score for Lethbridge. The Kelowna, BC product gained possession of the puck in Canes territory when Ethan O’Rourke won an offensive zone draw cleanly to Horning.

Boyko tallied his second goal during third period play while Elmer recorded his third to pick up the hat trick and send the Broncos to a 7-2 loss.

Shots on goal were 56-28 in favour of Lethbridge. The Hurricanes power play went 1/3 while the Broncos finished 0/8.

Swift Current will get on the bus and travel east to clash against the Brandon Wheat Kings for one last time this season on Monday, February 18th in a Family Day matinee. Puck drop is set for 2:30pm CT.