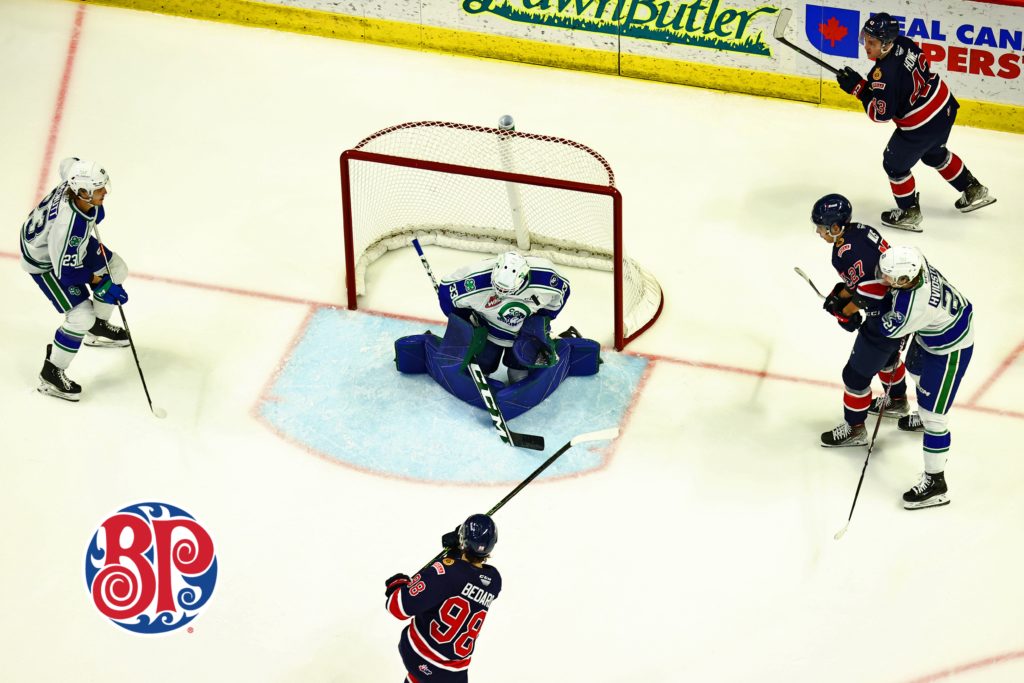 Alexander put on a stellar performance in the opening 20 minutes of the game, denying the Pats on numerous high-quality scoring chances to finish the opening period with 15 saves.

Both teams had breakway chances in the first period as well, with Tanner Howe hitting the post for Regina and Josh Davies lifting the puck over the net while shorthanded a few minutes later.

Alexander’s performance allowed the Broncos to take a 1-0 lead late in the period. Sam McGinley and Mathew Ward had a give-and-go play through centre, and McGinley took the return feed before cutting down the left side of the Regina zone.

He stepped around Tanner Brown before cutting across the crease, sliding the puck past the left pad of Matthew Kieper for his third goal of the season with 4:21 to go in the first. Shots read 10-8 Regina after 20 minutes with the Broncos leading 1-0.

Regina came out with some strong pressure to start the second period, but the Broncos weathered the storm before adding to their lead. Mathew Ward poked the puck through centre to Raphael Pelletier who skated down the right wing into the Pats zone.

Pelletier then threw the puck to the slot for Josh Filmon who fired it past the blocker of Kieper for his ninth goal of the season, giving Swift Current a 2-0 lead 5:22 into the second period.

After both teams killed off a penalty halfway through the middle frame the Broncos extended their lead off a turnover. Layton Feist went to backhand the puck up the middle of his own zone, but it was picked off by Connor Hvidston at the Regina blue line.

Hvidston juggled the puck, set it down to himself then skated down the slot and lifted a shot over Kieper’s glove to make it 3-0 Broncos with 4:08 to go in the second period.

Regina started mounting a comeback in the third period thanks to five consecutive penalties against Swift Current. The first two were for delay of game for pucks over the glass and Regina scored on both.

First was Alexander Suzdalev firing in a one timer from the right circle 6:02 into the period to make it a 3-1 game. After Hvidston was called for the delay of game, Stanislav Svozil wound up for a slap shot from the blue line and blasted a shot under the glove of Alexander to make it 3-2 at the 7:18 mark of the third.

The Broncos were then called for hooking, charging and clipping at 8:23, 10:41 and 13:54, but killed off all three of the penalties to hold their 3-2 lead heading into the final minutes.

Swift Current got their two-goal lead back off another turnover by the Regina defence. Parker Berge went to pass the puck up the slot of his own zone, but it went right to the tape of Filmon who quickly snapped a shot over Kieper’s glove for his second of the night, giving the Broncos a 4-2 lead with 3:18 remaining.

Regina pulled their goalie for the extra attacker shortly after the goal, and Josh Davies eventually hit the empty net with 1:15 to, celebrating his 100th career WHL game with the goal.

The Broncos will host the Regina Pats for their next game, Friday night at the InnovationPlex.