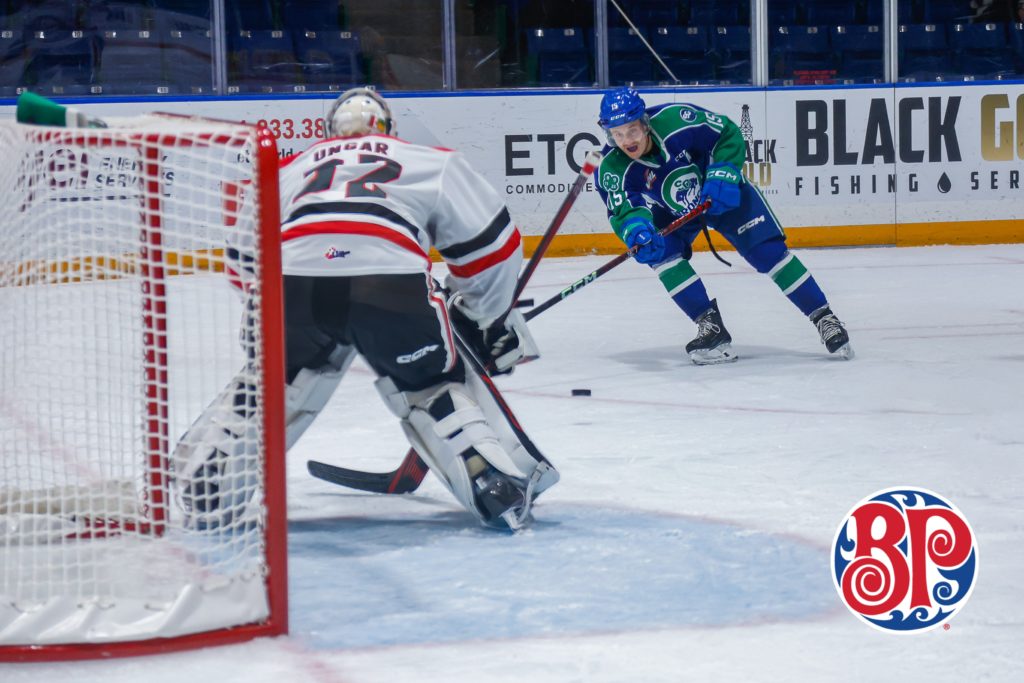 Swift Current, Sask. – The Swift Current Broncos (9-11-0-0) racked up plenty of scoring chances against the Moose Jaw Warriors (13-8-0-0) Saturday night, but couldn’t solve Connor Ungar who turned in a 33-save shutout as the Broncos fell 6-0.

The Warriors jumped ahead early while shorthanded. Ryder Korczak fanned on his shot while on a shorthanded breakaway, but recovered the loose puck on the goal line and fed Brayden Yager in the slot who tapped it into the open net 3:25 into the first period.

The Broncos had a number of good looks in the first period, including a breakaway for Brady Birnie and Josh Filmon jumping on a big rebound off the rush, but Ungar turned aside all 11 shots sent his way in the first period as the Broncos went into the intermission down 1-0.

Adam McNutt nearly tied the game early in the second period, taking a pass and skating down the slot before firing a shot clean off the post. The chance stung even more shortly after as the Warriors added to their lead.

Lucas Brenton let go a wrist shot from the left-wing boards that was tipped by Robert Baco and past Reid Dyck to give Moose Jaw a 2-0 lead, 2:42 into the middle frame.

The game remained 2-0 until the second half the period when Jagger Firkus scored to make it 3-0. He took a shot from the left circle that Dyck got a lot of, but it glanced off his glove and then slid into the net with 6:44 remaining in the period.

The Broncos once again outshot the Warriors in the second period, 11-8, but found themselves down 3-0 heading into the final period.

Mid way through the third period the Broncos were beginning to create sustained pressure, trying to cut into Moose Jaw’s lead like they had done the night before, but against the flow of play the Warriors added to their lead.

Dyck came out of his net and swung the puck around the boards in the Bronco zone, but it was intercepted by Riley Ginnell. He sent it to the slot for Tate Schofer and his shot was stopped, but the rebound came right to Nathan Pilling who made no mistake to give the Warriors a 4-0 lead.

Moose Jaw then added a pair of goals just over a minute apart as Denton Mateychuk and Josh Hoekstra rounded out the scoring and the Broncos were shutout for the second time this season.

The Broncos now have six days off before they welcome the Edmonton Oil Kings (4-17-1-0) for a pair of games next weekend.