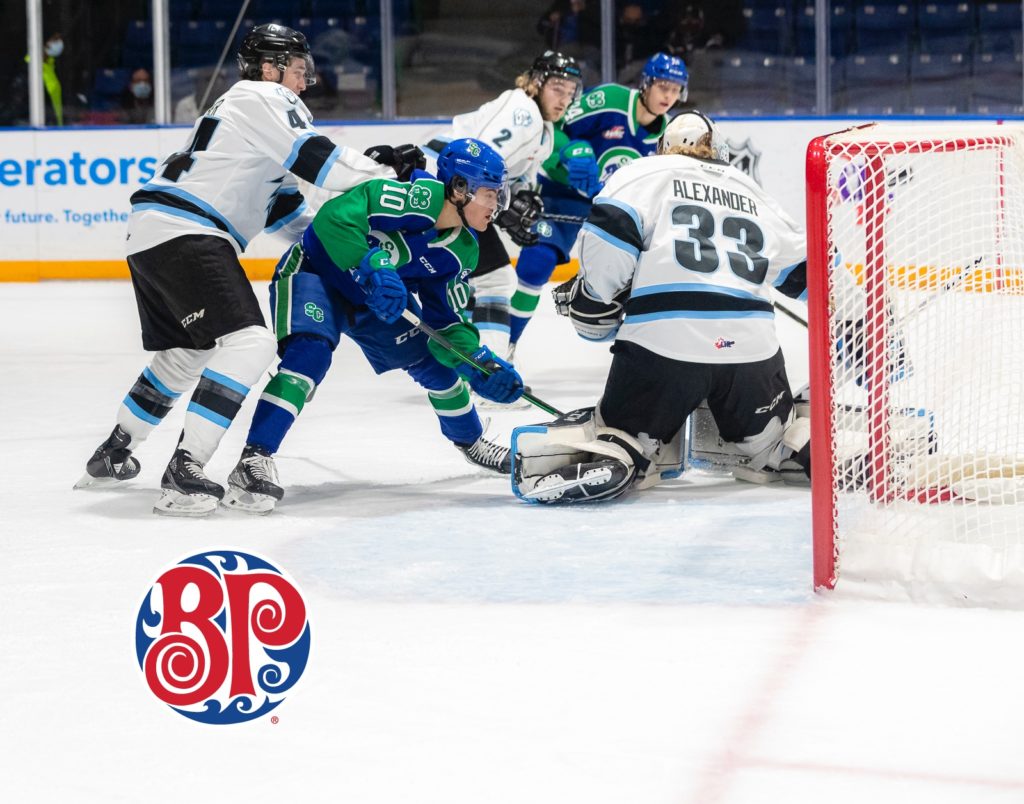 Winnipeg jumped out to a 1-0 lead just 3:13 into the game, knocking down a clearing attempt by the Broncos. Max Streule then centred for Jakin Smallwood and he fired a shot off the crossbar and in to give the ICE an early lead.

The Broncos had a handful of great chances in the opening minutes including a pair of odd man rushes and a breakaway by Josh Davies, but Gage Alexander kept his team in the lead.

Winnipeg then doubled their lead on a goal that was challenged by the Broncos for a potential offside. After Smallwood gained the Bronco line on right wing, he worked the puck into the slot for Mikey Milne who kicked it off his backfoot and snuck it past the right pad of Isaac Poulter to push Winnipeg’s lead to 2-0.

They carried that lead into the intermission and started the second period on the power play, but the Broncos would kill it off and cut into the ICE lead.

Kayden Sadhra-Kang hooked the puck up the right wings boards to Caleb Wyrostok who stepped around the defenceman on the right wing. Wyrostok then fed it across the slot to Josh Davies who pulled the puck to his backhand and slid it through the five hole of Alexander to get the Broncos on the board 2:08 into the second period.

After killing off another power play the Broncos would pull even while on the man advantage. Sam McGinley fired the puck from the right boards to the left point for Owen Pickering, who sent the puck right back across the seam to McGinley who beat Alexander on the glove side to tie the game at two 12:52 into the second.

The Broncos would kill off another ICE power play shortly after the goal before going back to the power play, but it was the ICE who capitalized. Connor McClennon snuck off the Winnipeg bench and got behind the defence undetected, taking a breakway pass from Smallwood and beat Poulter under the glove for a shorthanded goal with just 18 seconds to go in the period.

The ICE took that 3-2 lead into the intermission, but the Broncos ramped up the pressure as the ice started to tilt in the Broncos favour.

After Jordan Borysiuk was robbed on a cross-crease play by Alexander early in the period, Raphael Pelletier and Cole Nagy both hit the crossbar as the pressure continued to mount before Swift Current pulled even.

After winning a board battle to get control of the puck, it came to the slot for Pelletier who fired it past the glove of Alexander to tie the game 7:53 into the third period.

The game remained 3-3 until late in regulation when Davies was called for goalie interference, giving Winnipeg their fourth power play of the night.

This one they would capitalize on as Matthew Savoie beat Poulter on the blocker side from the right circle, giving the ICE a 4-3 lead with just 1:46 to play.

The Broncos went to the power play 43 seconds later, and pulled Poulter for the extra attacker, but couldn’t find the tying goal, falling 4-3.

The Broncos six-game homestand wraps up tomorrow night at the Saskatoon Blades (11-6-1-0) come to the Innovation Credit Union iPlex for the first time this season.