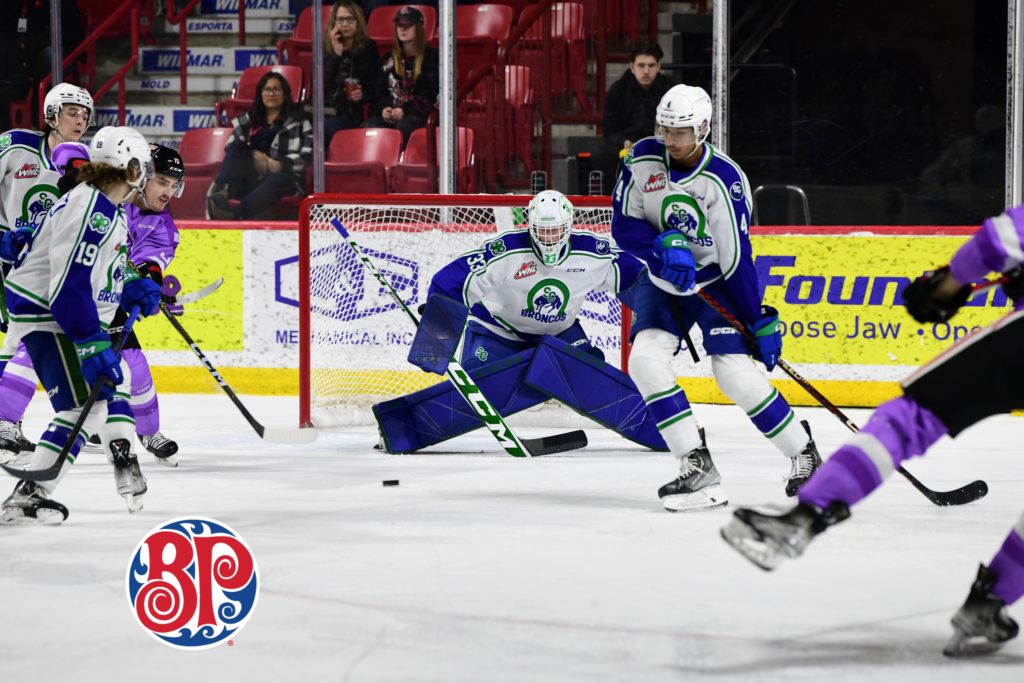 After getting through an early penalty kill the Broncos gave up the first goal of the game. Moose Jaw’s captain Denton Mateychuk took a pass at the left point before spotting Jagger Firkus in the slot and feeding him the puck. Firkus fired a shot off the post and in past the glove of Gage Alexander, giving Moose Jaw a 1-0 lead 5:27 into the game.

Swift Current responded quickly to tie the game. Just over two minutes later, Mathew Ward tried to cut to the net from the goal line but was stopped by Jackson Unger. The rebound sat at the top of the crease for Brady Birnie who tapped it in to tie the game with his third goal of the season.

The Broncos went back to the penalty kill shortly after the goal and the Warriors regained the lead. Max Wanner tried a shot from the right circle that was blocked, but got his own rebound a let a backhand shot go from the slot that beat Alexander on the glove side to restore Moose Jaw’s lead.

Swift Current outshot the Warriors 16-9 in the opening 20 minutes but were down 2-1 heading into the intermission.

The second period wasn’t as kind to the Broncos as the Warriors outshot them 17-5 and added a pair of goals to their lead.

The first came 5:19 into the period when Atley Calvert came down the left wing before lifting a shot over the shoulder of Alexander after fending off the Broncos defenceman to make it 3-1.

Shortly after the goal, Swift Current killed off a lengthy five-on-three penalty kill as Caleb Wyrostok and Connor Hvidston were called for instigating and delay of game respectively 51 seconds apart.

The penalty killing unit was a huge reason why the Broncos were able to get to the second intermission down 4-1 as the Warriors outshot the Broncos 15-5 in the middle frame.

Hoping for a strong third period, the Broncos had a tough start as Moose Jaw extended their lead just 1:05 into the final frame. An errant pass went off a Broncos skate and into the slot, and while Alexander was able to deny Eric Alarie in tight, he was helpless to stop the rebound as Firkus picked up his second of the game to make it 5-1.

The Broncos went to their first power play of the game just nine seconds after the goal as Sam Ward was hit from behind by Calvert off the next faceoff. On the power play, Mathew Ward took a long wrist shot from the blue line through a screen, beating Unger on the blocker side for his ninth goal of the season 2:05 into the period.

After killing off two more penalties in the third period, the Broncos went back to the power play and further cut into Moose Jaw’s lead. This time it was Sam McGinley skating in from the point and beating a screened Unger for his fourth of the year, pulling the Broncos within two with 5:32 to play.

As the clock ticked down, the Broncos pulled Alexander for the extra attacker in the final minutes of the game. McGinley saved an empty net goal with a diving backcheck on Calvert, breaking up a chance for Moose Jaw to ice it.

The save proved to be even bigger as the Broncos scored not long after. The Warriors turned the puck over at their own blue line and Connor Hvidston fed it down to Birnie in the left faceoff circle. He quickly fired a pass to Mathew Ward on the other side of the crease and Ward scored his second of the night to get the Broncos to 5-4 with 47 seconds left.

Swift Current pulled Alexander again off the next faceoff, but the Warriors were able to hold on to their one-goal lead, and the Broncos fell 5-4.

The two teams will meet again at the InnovationPlex on Saturday night.