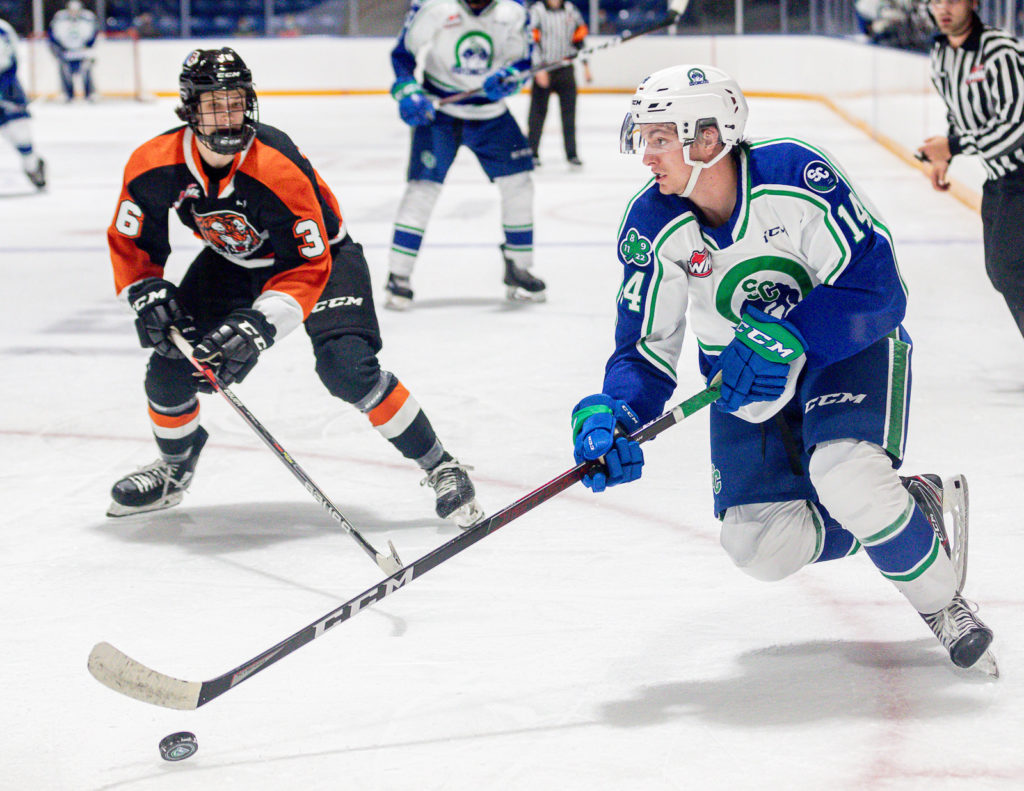 Swift Current, Sask. – The Swift Current Broncos clawed their way back from a 2-0 deficit against the Medicine Hat Tigers Friday night, but ultimately fell 3-2 in overtime.

After a slow start to the game, the Tigers opened the scoring off a faceoff win. Bogdans Hodass cut across the high slot and fired a low shot through traffic that beat Reid Dyck on the blocker side to make it 1-0 with 5:50 to go.

Medicine Hat extended their lead late in the period with Teague Patton scoring on the power play to give the Tigers a 2-0 lead after the first period.

After an opening 10 minutes of the second where the Broncos had three power plays, the ice started to shift in the Broncos favour as they racked up scoring chances.

Beckett Langkow stood tall in the Tigers crease, turning aside all 10 shots he saw in the second period while also getting some help from his defence group who blocked a handful of shots.

Swift Current carried the momentum from the end of the second into the third, cutting into the Tigers lead.

On a power play that carried over, Mathew Ward’s shot from the left circle was tipped on goal by Josh Davies. The rebound came to Cole Nagy who quickly fired it in past the blocker of Langkow to get the Broncos on the board just 31 seconds into the third.

Dyck came up with his biggest save of the game on a 2-on-1 a few minutes later, stretching over to his right and sticking out his right leg to take away a goal from Steven Arp and keep the Broncos within one.

The save turned out to me instrumental for the Broncos as Nagy scored his second power-play goal of the night, finishing off a tic-tac-toe passing play to tie the game 9:03 into the third.

With the game still tied 2-2 through 60, overtime started quickly with the Broncos getting a chance on a 2-on-1 rush. Ward’s shot from the left wing was stopped and Oasiz Wiesblatt was knocked into his own net, sending it off it’s pegs.
Play continued and the Tigers Owen MacNeil finished off a 2-on-1 to win the game for Medicine Hat.

The two teams then played a three-round shootout after the goal, with Broncos rookie Rylan Gould scoring the lone goal of the shootout.

Swift Current wraps up their pre-season schedule with a rematch tomorrow night in Medicine Hat before the 2021-22 regular season begins next Friday with the Broncos once again hosting the Tigers.