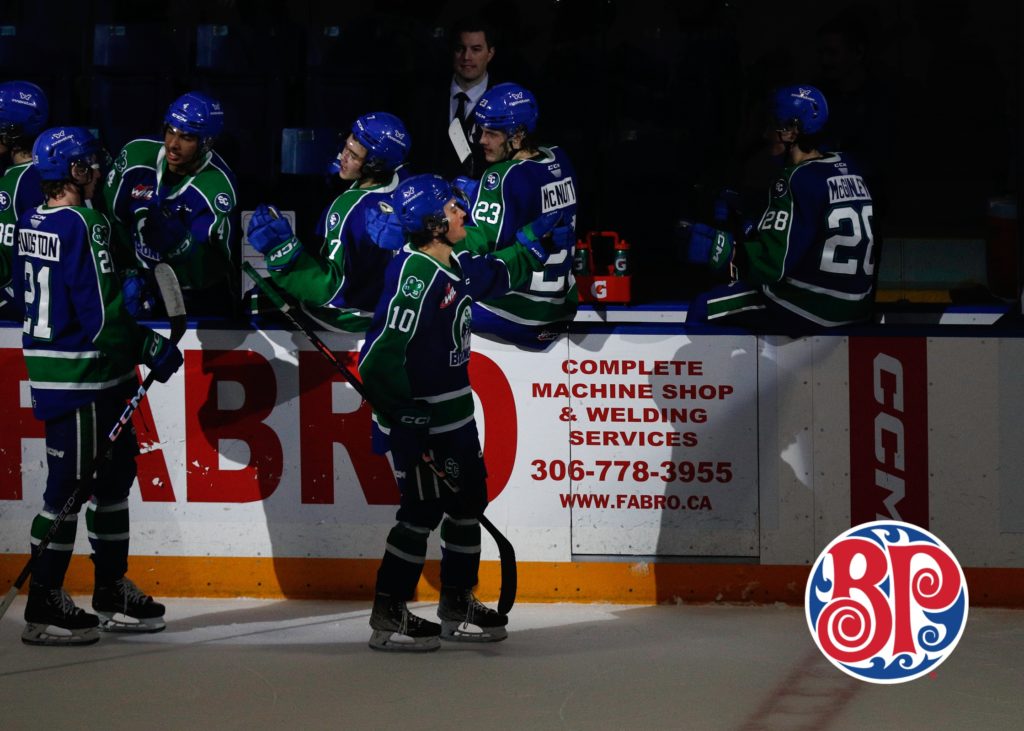 Swift Current, Sask. – The Swift Current Broncos (9-9-0-0) received a three-point performance from Connor Hvidston and a 37-save outing from Gage Alexander to double up the Brandon Wheat Kings (7-11-2-0) Tuesday night.

Gage Alexander made a number of quality saves over the course of the opening 20 minutes as the Broncos had a hard time finding the legs offensively, being outshot 13-4 in the first period.

Alexander’s first big stop came 6:27 into the game when he stretched out his left pad and denied Rylen Roersma who took a pass coming down the slot and pulled the puck to his backhand before trying to jam it in.

A few minutes after the big stop, the Wheat Kings went to the power play and opened the scoring. Nate Danielson skated into the Broncos zone down the right wing before finding Brett Hyland heading to the net, and his shot found a hole in under Alexander’s blocker, giving Brandon a 1-0 lead.

Alexander had a few more big stops of Roger McQueen, Charlie Elick and Matthew Henry over the duration of the first period, helping the Broncos to the intermission down just 1-0.

Swift Current pulled even early in the second period. While on a penalty kill, Josh Davies split the Wheat Kings’ defence and took off for a shorthanded breakaway, beating Carson Bjarnason over the blocker from between the circles to tie the game at one.

One minute later the Broncos were pressuring in the Brandon zone and a long wrist shot by Grayson Burzynski was blocked. The puck then dropped right to the tape of Connor Hvidston who snapped a shot past the glove of Bjarnason, giving the Broncos a 2-1 lead with two goals in 1:03.

The game remained 2-1 for the next 12 minutes until the Broncos went to their first power play of the game. Hvidston took a rink-wide feed from Josh Filmon and then fired the puck to the back post where Mathew Ward one-timed home his eighth goal of the season, pushing the Broncos lead to 3-1.

The goal was also Ward’s 100th career point in his 106th career game.

Swift Current took the 3-1 lead into the second intermission despite being outshot 21-14. While that trend continued in the third period, the Broncos were able to briefly add to their lead.

Luke Mistelbacher skated down the left side into the Brandon zone and used a defender as a screen, beating Bjarnason blocker side from the left circle to put the Broncos up 4-1.

The three-goal lead lasted for just 51 seconds as Hvidston was given a kneeing penalty, sending the Wheat Kings to the power play. On the man advantage, Jake Chiasson flew down the right wing into the Broncos end and sent the puck to the back post for Nolan Ritchie who tapped it in to make it 4-2.

Both teams had a power play opportunity in the final 13:29 of regulation, and the Wheat Kings eventually pulled Bjarnason for the extra attacker, but neither team would find the back of the net again as the Broncos held on for the 4-2 win.

Swift Current now gets set for a home-and-home set with the Moose Jaw Warriors (11-8-0-0), beginning on the road, Friday night.