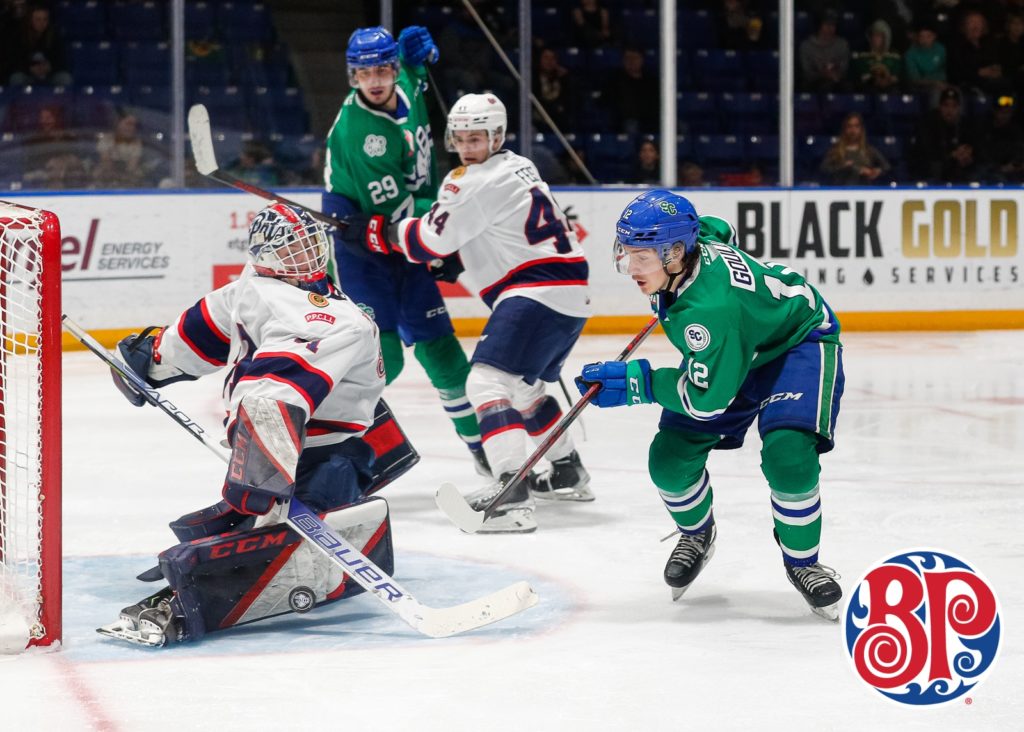 The Broncos came out of the gate with jump, quickly outshooting the Pats 5-0 in the opening minutes of the game. Josh Filmon had a great chance to open the scoring, getting a shorthanded breakway, but Pyne denied him with the blocker to keep the game scoreless.

Raphael Pelletier nearly put the Broncos ahead while on the man advantage as his one timer from the left circle hit the post but stayed out, and the two teams went into the intermission scoreless. Shots read 15-10 Broncos after one period.

It was more of the same in the early going of the second period as both goaltenders made key saves to keep the game scoreless. The Broncos finally solved Pyne in the second half of the period.

Rylan Gould gained the Regina line on right wing and swung the puck across for Cole Nagy. Nagy then dropped it back to Eric Van Impe who quickly sent a return feed to Nagy, and his shot from the bottom of the left circle snuck under the blocker arm of Pyne and into the net to give the Broncos a 1-0 lead with 6:18 remaining in the period.

The lead didn’t last too long as the Pats tied the game with a lucky goal three minutes later. Tanner Howe fired the puck across the slot to Connor Bedard who was coming down the left side and he redirected the puck on Poulter.

The Broncos goalie made the save but wasn’t sure where the puck was, and as he fell over to his back and lifted his right pad up, he accidently kicked the puck into the net as the Pats pulled even at one. The two teams were on even terms heading into the final 20 minutes with the Broncos lead 29-16 on the shot clock.

The Pats came out with jump to start the third period and it led them to their first lead of the night. A shot from the blue line by Parker Berge was tipped by Logan Nijhoff and deflected to the side of the net where Borya Valis was able to knock it in, putting Regina ahead 2-1 just 1:46 into the third.

Regina then added to their lead six minutes later when Berge let a wrist shot go from the blue line off a faceoff win that hit Nijhoff in the leg and deflected off the post and in to push the Pats lead to 3-1.

The Broncos had their fair share of chances in the third period, including another breakway for Filmon, but couldn’t solve Pyne until the final minute of regulation.

With Poulter on the bench for the extra attacker, Mathew Ward took a shot from the right circle that was stopped by Pyne, but the rebound was chopped in by Pelletier to get the Broncos to within one with 19 seconds left.

That was as close as Swift Current would get as Bedard iced the game with the empty-net goal off the next faceoff, sealing the 4-2 loss.

The Broncos now have a week to prepare for their final game of the regular season, a must-win game against the Prince Albert Raiders (26-34-4-1) next Friday night at home.