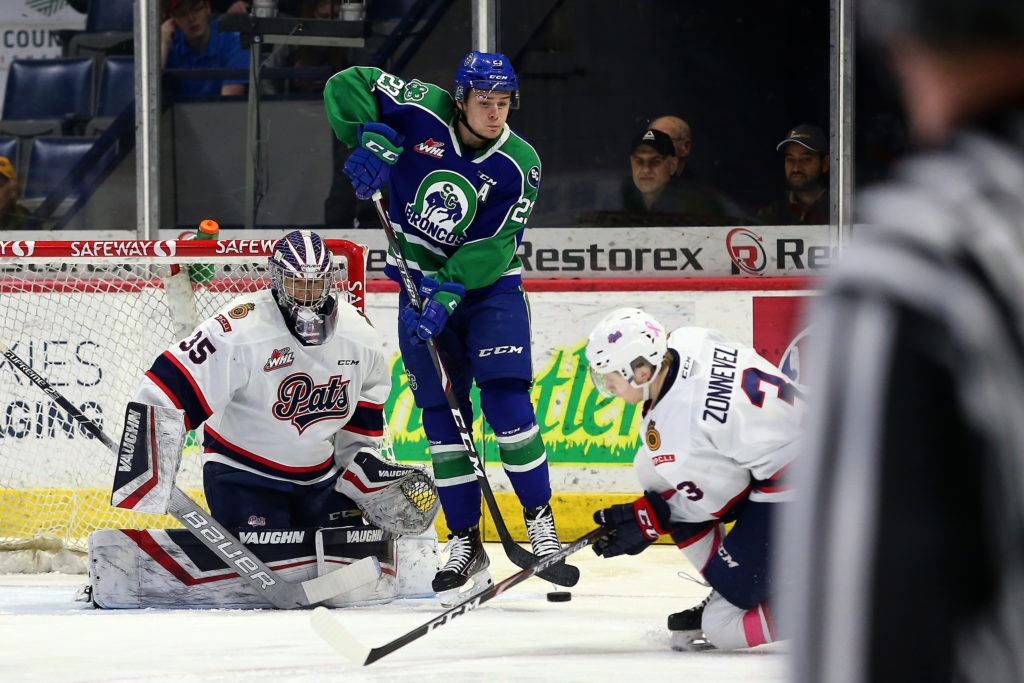 Regina opened the scoring after Holmes was stopped on a wraparound off the rush, but Riley Krane found the rebound in front and scored on his second opportunity 3:38 into the game.

Swift Current responded with a power-play goal when Alex Moar’s point shot was tipped by Aiden Bulych for his 11th of the season.

The lead didn’t last too long as Regina scored a power-play goal of their own. After the Pats held the puck in the zone, Holmes took a pass in the right circle and sent it to the net for Drew Englot to tip it past Poulter to give the Pats a 2-1 lead heading into the second period.
Matthew Benson pulled the Broncos even early in the second period with a shot that tipped off a Pats stick and floated over the shoulder of Donvan Buskey 3:20 into the second period.

The Broncos were given a power play mid-way through the second put it was Regina taking advantage. Holmes came into the Broncos zone on a shorthanded rush and beat Poulter through the five hole from the right circle to restore Regina’s lead.

Shortly after the goal the Broncos had a 30 second five-on-three opportunity but couldn’t cash in as the score remained 3-2.

Regina doubled their lead with a goal in the final minute as Ryker Evans knocked in a rebound in front of the net to make it 4-2 after two.

The Broncos next game is Wednesday when they welcome the Winnipeg ICE for EMS Appreciation Night.