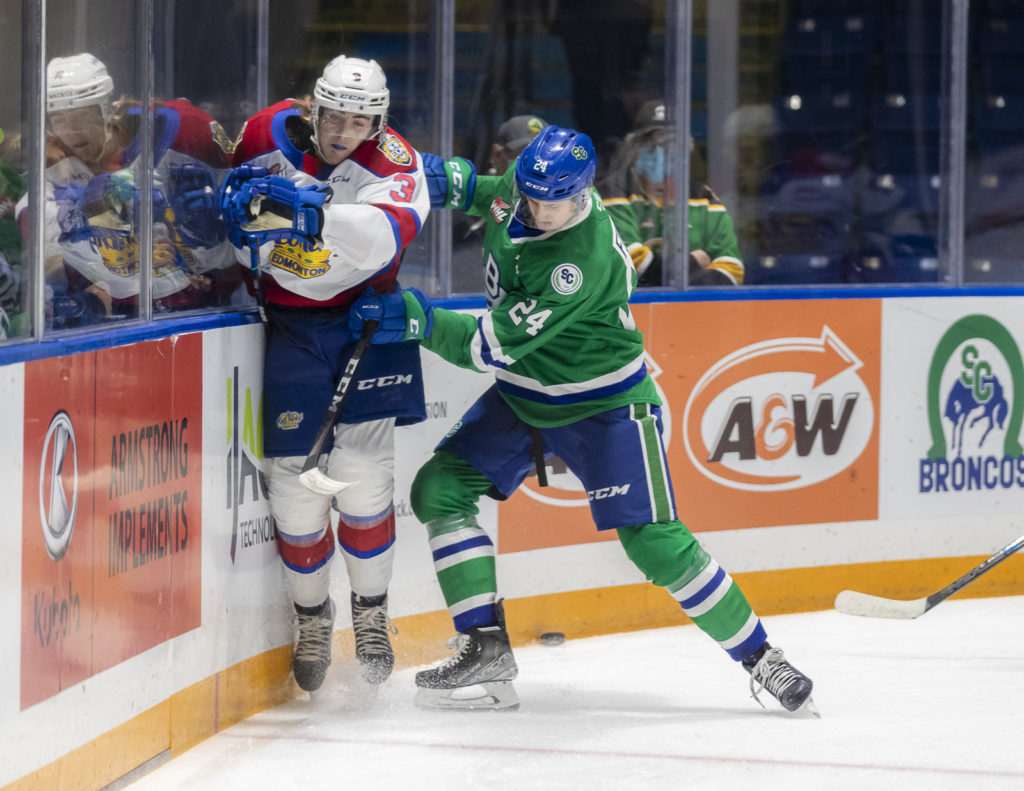 SWIFT CURRENT, Sask. – The Swift Current Broncos (2-2-0-0) put on a solid 60-minute effort against the Edmonton Oil Kings (3-1-0-0) Friday night, but a power-play goal early in the third period stood up as the winner in a 2-1 Edmonton win.

The Broncos opened the scoring 7:35 into the game. Sam McGinley worked the puck to the slot from the right point for Josh Davies who spun and fired, beating Sebastian Cossa on the blocker side for his first goal of the season.

The game remained 1-0 through 20 minutes with the shots deadlocked at 10.

Edmonton began putting the pressure on in the second, outshooting Swift Current 17-5 and eventually tying the game on a fortuitous bounce.

Eric Johnston pinched in from the left point and took a feed from the opposite goal line, but his one timer was tipped by a diving Carter Stebbings.

The puck rolled to the crease and right to the tape of Jacob Boucher who shovelled into the empty net for his second goal of the year, tying the game 1-1 10:50 into the second period.

Tensions flared up after the horn sounded to end the second period as both teams came together with Keegan Slaney eventually taking a penalty, giving the Broncos a power play to start the third.

The power play didn’t last long as Chase Lacombe stepped into Tyler Horstmann while coming off the bench and was given a five-minute major for checking to the head.

Simon Kubicek gave Edmonton their first lead of the game with a shot from the high slot, beating Isaac Poulter on the blocker side.

Kubicek’s goal was the only one Edmonton would score on the five-minute major as Poulter kept the Broncos in it, turning aside multiple chances.

Rylan Thiessen had a chance to tie the game late, working his way through the Oil Kings zone and around the defence before cutting across the top the crease, but Cossa stretched out his left pad to deny the tying goal.

The Broncos pulled Poulter for the extra attacker, but couldn’t solve Cossa again and dropped the 2-1 game.

Swift Current now hits the road for a 2:00 game against the Calgary Hitmen (0-2-0-0) on Sunday. Calgary hasn’t played since last Sunday against Lethbridge, a 4-1 loss.