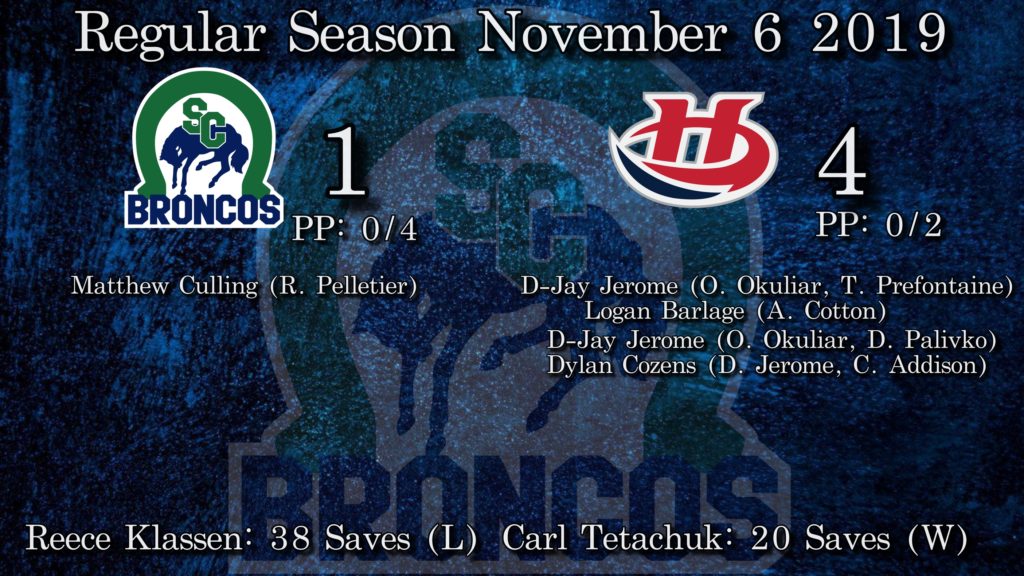 A scoreless first period saw the Hurricanes hit the post twice, the second time the puck laid flat on the goal line before Eric Houk swept it away. After a short review, the officials agreed the puck never crossed the line.

Early in the second the Hurricanes got on the board when D-Jay Jerome kicked a pass to himself before working himself to the front of the net and backhanding a shot under Reece Klassen’s glove.

Eight minutes later, Alex Cotton flew down the left wing in the Broncos zone before heading behind the net and hooking the puck out front to Logan Barlage who roofed the shot over Klassen’s glove to make it 2-0 Hurricanes.

Lethbridge added one more late in the period as Jerome cut across the slot before firing the puck past Klassen’s blocker to give his team a 3-0 lead heading into the third period.

The Broncos finally got on the board early in the third. After Raphael Pelletier won a faceoff in the Hurricanes zone, Matthew Culling raced to the loose puck and wired it past an unsuspecting Carl Tetachuk to get Swift Current on the board.

The Broncos had a couple more chances as the period went on, but Dylan Cozens would add another goal to restore the Hurricanes three-goal lead as the final score read 4-1 and the Broncos dropped their fourth straight.

Swift Current is back in action Friday night when they head to the Brandt Centre in Regina for the first of six meetings against the Pats (2-11-2-0) this season.