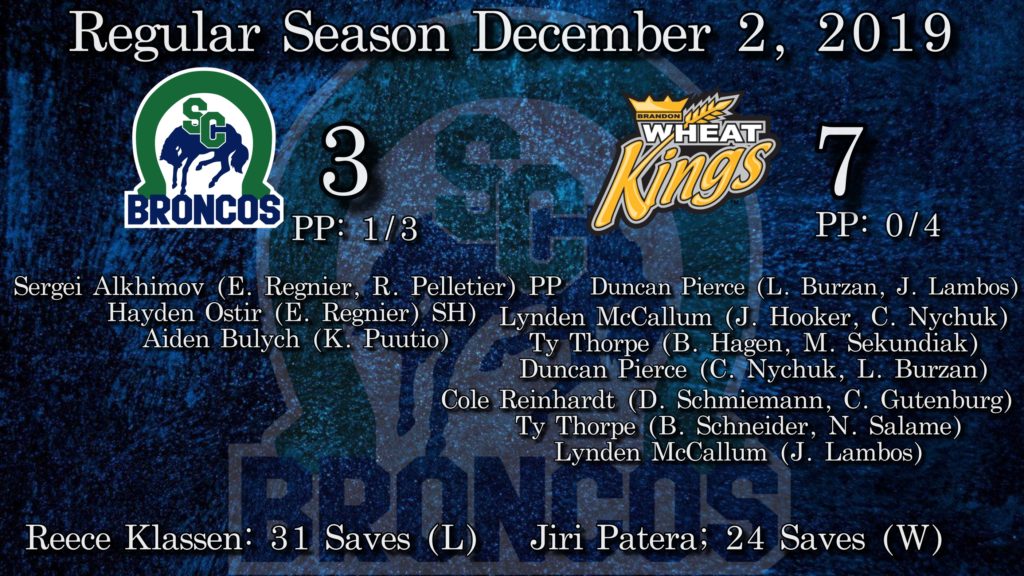 Brandon opened the scoring on their first shot of the game. After Hendrik De Klerk broke up the initial pass from behind the net, the puck deflected to Duncan Piece who beat Reece Klassen on the blocker side 5:49 into the game.

A few minutes later the Broncos got a power play and tied the game. After Raphael Pelletier stole the puck from the Wheat Kings defender along the right-wing boards, he slid it to Ethan Regnier.

Regnier then found Sergei Alkhimov streaking down the slot who fired the puck past Jiri Patera to tie the game. Regnier hit the post on another power play with just 10 seconds left in the period as the period ended 1-1.

The Broncos weathered a long storm from the Wheat Kings in the middle stages of the second period before taking the lead.

While shorthanded, Regnier banked the puck to centre ice where Hayden Ostir was all alone and came in on a breakaway, beating Patera on the blocker side to give the Broncos a 2-1 lead.

Just over two minutes later, Patera couldn’t catch a long shot from Kasper Puutio and Aiden Bulych jumped on the rebound to give the Broncos a 3-1 lead through 40.

The third period didn’t start well for Swift Current as Brandon scored just a minute in. A shot from the left circle went off two legs, ramped off Klassen’s stick, was batted out of mid-air by Alex Moar and then went off Moar’s shoulder and into the net.

A minute later, Ty Thorpe scored to tie the game before Duncan Pierce deflected a shot from the blue line to give the Wheat Kings the lead just 4:16 into the period.

Cole Reinhardt split the defence and pushed the Brandon lead to 5-3, completing a streatch of four goals in 4:40.

Thorpe and Lynden McCallum added their second goals of the game later in the period to push the final score to 7-3.

The Broncos look for a rebound performance tomorrow in Winnipeg against the ICE (14-11-1-0).