Boston Pizza Recap: Broncos fall on the road in Saskatoon 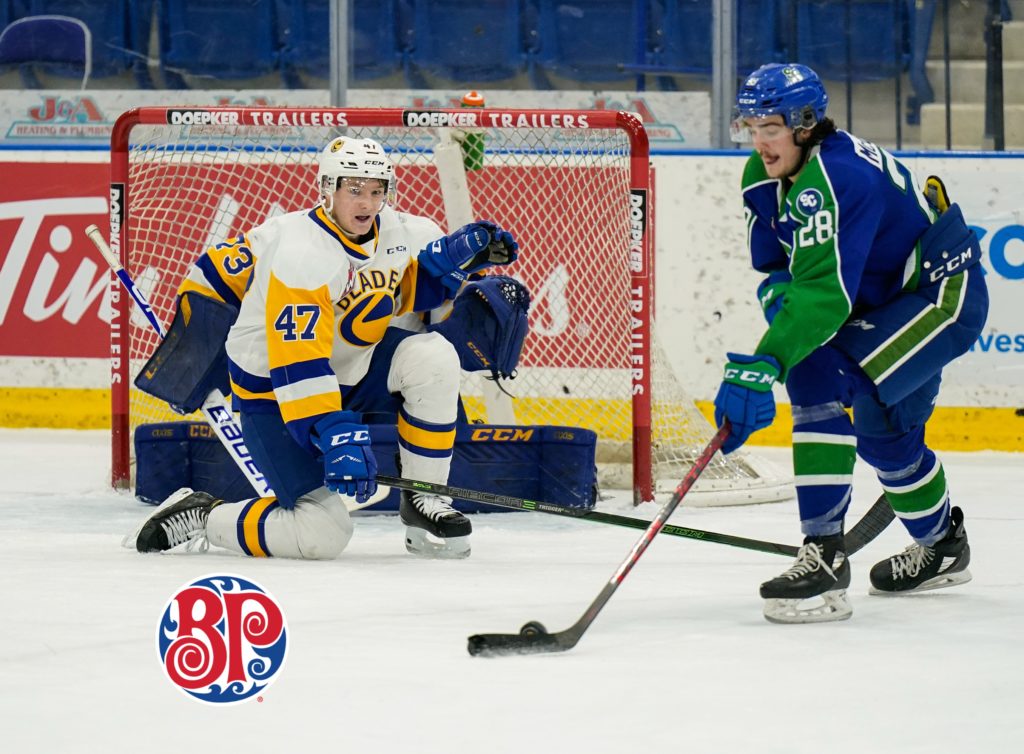 Saskatoon, Sask. – The Swift Current Broncos (13-17-4-1) had long stretches of strong play on the road Saturday night, but the Saskatoon Blades (19-14-1-1) jumped ahead in the first period and had the lead the rest of the way, taking the game 4-1.

It was fast-paced start to the game with only two whistles in the opening six minutes of the game. That included a pair of chances off the rush for Broncos as Josh Filmon was denied by the blocker of Nolan Maier.

Saskatoon opened the scoring 6:41 into the game. Tanner Molendyk gained the Bronco line on right wing before lifting the puck toward the front of the net. Kyle Crnkovic was charging to the net front and redirected the pass over the blocker of Isaac Poulter to jump ahead 1-0.

Swift Current killed off a penalty shortly after the goal, but the Blades got a second power play later in the period and added to their lead. Tristen Robins leaned into a one timer from the left circle, beating Poulter under the glove to give Saskatoon a 2-0 lead after one.

The Broncos cut into Saskatoon’s lead early in the second period, while on a power play of their own. Robins turned the puck over at his own blue line and Raphael Pelletier slid it down to Caleb Wyrostok near the net. Wyrostok fired a quick shot through the five hole of Maier for his eighth of the season.

The goal sparked the Broncos as they controlled play for the first half of the second period. The Blades didn’t register their first shot on net until around the 11:00 minute mark of the period.

Swift Current killed off another Saskatoon power play in the back half of the period, heading into the intermission down 2-1.

The pace of the game slowed down in the early going of the third period with neither team having a shot on net for the first few minutes. The game remained 2-1 until the final minutes of regulation.

Spencer Shugrue threw the puck toward the net from the right-wing boards and it was deflected in front by Vaughn Watterodt, giving the Blades a 3-1 lead with 2:51 remaining.

The Broncos were sent to the power play with under two minutes to go in the game and pulled Poulter for the extra attacker, but couldn’t find the back of the net before Crnkovic hit the empty net to seal a 4-1 Blades win.

Swift Current is back on home ice on Tuesday as they welcome the Winnipeg ICE in a makeup game from December 30.