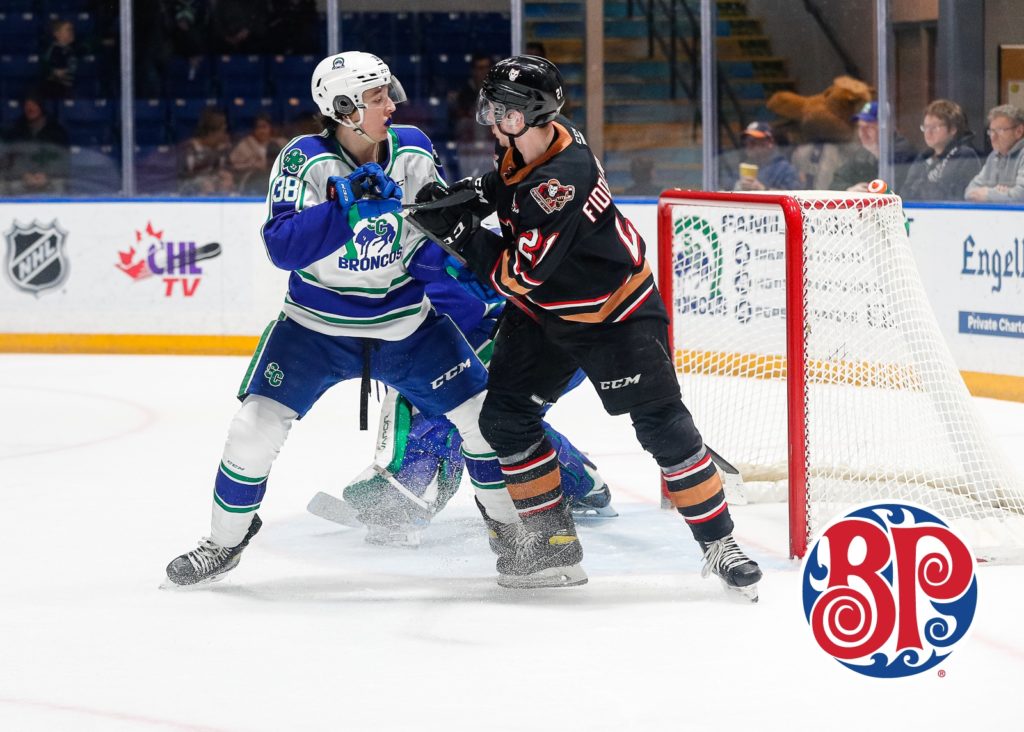 The Broncos got a power play early in the game after a heavy collision in the Calgary zone. Josh Davies ran over Carter Yakemchuk who left the game following the hit, and the other nine players on the ice then got into a scrum. Anton Yatsyshin was taken out of the pile and sent to the box for roughing.

On the power play, Braeden Lewis held the puck in at the blue line and hooked it across for Eric Van Impe coming down the right wing. He got the goaltender Brayden Peters to commit to the shot before sliding the puck to the back post for Karson King who fired in his 10th goal of the season 4:43 into the game. The goal extended King’s point streak to eight.

Calgary tied the game in the final minutes of the period. Stevenson knocked down a clearing attempt before firing the puck toward the crease, which was then kicked in from outside of the crease off the skate of Tschigerl.

The two teams went into the intermission tied at one with Calgary leading on the shot clock at 10-6.

The Hitmen had some jump to start the second period, controlling the majority of the play before eventually taking the lead. The two teams went end to end with great chances on both nets before Stevenson was able to knock in a rebound 8:27 into the second period, giving Calgary their first lead of the night.

The Broncos started to generate some chances as the period went on before getting their second power play of the game. While they didn’t connect on the man advantage, they tied the game just nine seconds after it expired.

Josh Fluker’s shot from the right point was deflected by Carter Stebbings near the crease, tying the game at two with 4:49 left in the second period.

Calgary wasted no time restoring their lead as Tschigerl was hit with a shot from the right point, but then picked up the puck and fired it over the blocker of Reid Dyck just 27 seconds after Stebbings’s goal to put Calgary ahead 3-2.

The Hitmen then added to their lead in the final minute of the period as Zac Funk stole the puck off a faceoff in the Broncos zone before centering for Cael Zimmerman who one timed a shot past the glove of Dyck to give Calgary a 4-2 lead.

Swift Current began the third period on the penalty kill, but Zimmerman was then given a four-minute penalty for high sticking to put the Broncos on a lengthy power play.

The Broncos had some good looks on the man advantage but couldn’t cut into the Hitmen’s lead. Right as the power play expired, Zimmerman stepped out of the box and picked up a clearing attempt, coming in on a breakaway and scoring his second of the night to push Calgary’s lead to 5-2.

Peters made a number of timely saves for the Hitmen in the third period, denying the Broncos off rebound chances on multiple occasions to keep his team ahead over the course of the final frame.

The Broncos thought they had cut into Calgary’s lead late, but Josh Filmon’s goal was waved off after Calgary successfully challenged the goal on an offside review.

The clock wound down and the Broncos were unable to claw their way back, falling 5-2 on home ice. The two teams will wrap up the season series Sunday afternoon with a 2:00 puck drop in Calgary.