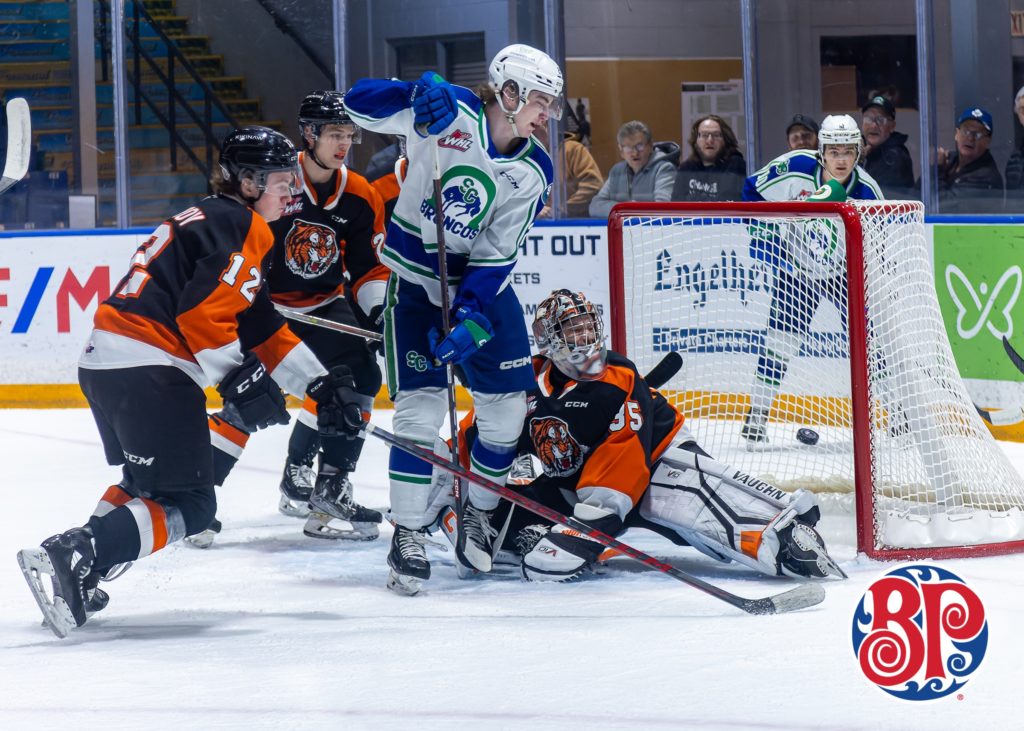 It was a tough start to the game for the Broncos with Medicine Hat scoring shorthanded just over four minutes after puck drop. Hunter St. Martin chipped the puck out to neutral ice and Shane Smith was then able to chip it past the last defender, taking off on a breakaway.

Smith fired a shot over the blocker of Joey Rocha as the Tigers took a 1-0 lead 4:07 into the first period.

The Broncos got their legs under them as the period went along, tying the game on their second power play after Dru Krebs flipped the puck over the glass from his own zone. After the puck slid below the Tigers goal line, a great forecheck by the Broncos was able to poke it loose to set up the goal.

Connor Hvidston walked out from the goal line and saw his backhand shot stopped, but the rebound went right to Josh Filmon who sent it into the open net for his 27th of the year, pulling the Broncos even 12:08 into the game.

Two minutes later Swift Current went to their first penalty kill, and Rocha came up with a number of key stops to keep the game tied heading into the final minutes of the period. The Broncos were called for high sticking inside the final minute of the first as the two teams went into the locker room tied at one.

Swift Current killed off the carry-over penalty from the first period and would take their first lead of the night a few minutes later.

Hvidston carried the puck into the Tigers zone on left wing before sending it to the slot for the trailer on the play, and Josh Fluker chipped it over the glove of Beckett Langkow for his first WHL goal to put the Broncos up 2-1.

The Broncos went back to the penalty kill just over a minute after the goal, but had back-to-back glorious scoring chances while shorthanded. The first was Hvidston on a breakaway who was denied by the right pad of Langkow.

Seconds later Hvidston forced a turnover along the left-wing boards and found Caleb Wyrostok heading to the net. Wyrostok took the feed alone in front but was denied by the glove of Langkow who came up with two massive saves to keep the game 2-1. Those stops proved pivotal as the Tigers regained control of the game moments later.

Smith skated into the Broncos zone down the left wing and let a shot go that trickled through Rocha, allowing Brayden Boehm to tap it into the open net to tie the game at two 11:28 into the second.

Two minutes later Bogdans Hodass skated into the slot off the rush and fired a shot off the post and in, restoring Medicine Hat’s lead at 3-2.

The Tigers capped off a strong seven-minute stretch by scoring just after a power play had expired with Hodass picking up his second of the game, giving Medicine Hat a 4-2 lead heading into the third period.

After killing off 1:38 of power play time to start the third, the Broncos began their comeback. Filmon scored his second of the night 3:47 in, taking a feed from Mathew Ward on the goal line and snapping it past Langkow to make it 4-3.

At 12:16 of the period Oasiz Wiesblatt was given two penalties in the same stoppage, one for roughing and one for kneeing, sending the Broncos to a four-minute power play. Just 20 seconds in, Filmon’s shot from the left circle was tipped in by Hvidston to tie the game at four.

Swift Current wasn’t able to capitalize on the second power play as the game eventually went into overtime.

The Tigers had the majority of chances in overtime, outshooting the Broncos 6-1, but Rocha stood tall to get the game to a shootout. That included the final 1:23 of overtime with the Tigers on the power play.

In the shootout, Andrew Basha scored in round one after Filmon was denied. Josh Davies then pulled the Broncos even in round two before Rocha stopped Smith. Clarke Caswell and Hodass were stopped in round three before Caleb Wyrostok put the Broncos up in round four.

Tomas Mrsic kept his team alive by scoring to extend the shootout, and Luke Mistelbacher and Cayden Lindstrom were denied in round five. Hvidston then got stoned by Langkow to begin round six before Boehm scored for the Tigers, giving them a 5-4 win.

The Broncos now turn their attention to the Regina Pats (21-19-1-1) who come to town on Friday, a game that is nearly sold out.