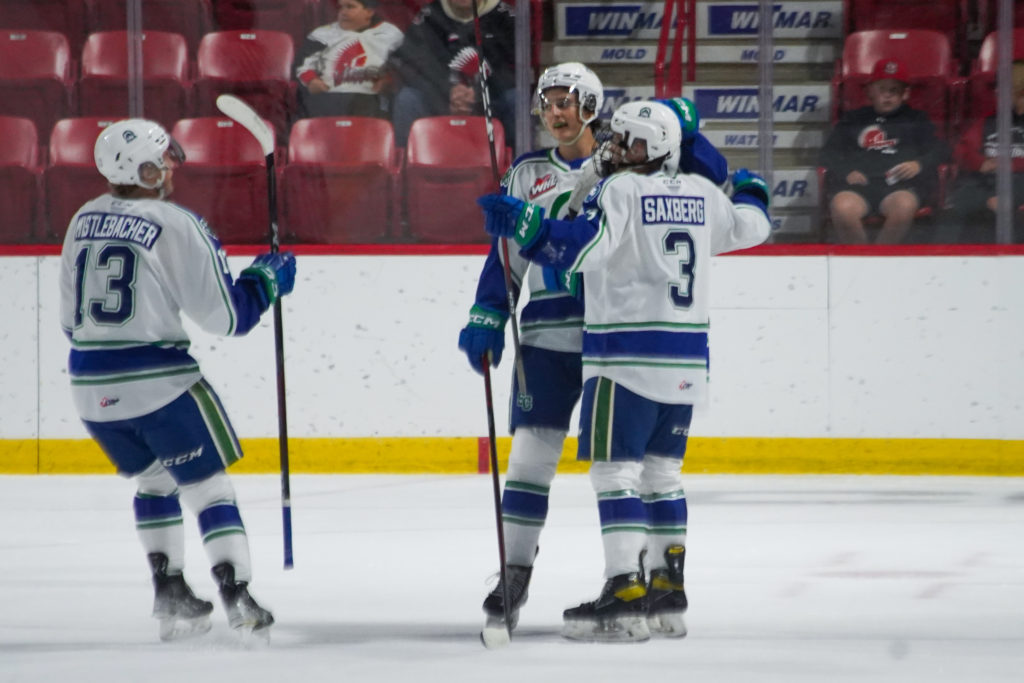 Moose Jaw, Sask. – Led by a four-point performance by Josh Filmon, the Swift Current Broncos opened their pre-season schedule with a 5-4 win over the Moose Jaw Warriors Friday night.

It was a tough start to the game for the Broncos as the Warriors had the early jump, and took a 1-0 lead. Lucas Brenton took a pass at the top of the circles and fired a shot past the glove of Reid Dyck just 2:22 into the game.

After weathering sustained pressure by the Warriors following the goal, including a pair of power plays, the Broncos eventually pulled even. Brady Birnie took a pass while in the right circle and beat Jonah Tonhauser under the glove to tie the game with 4:35 left in the first period.

The Broncos had their first power play of the game cut short by a penalty late in the period, and the Warriors regained the lead during four-on-four. Jagger Firkus beat Dyck over the glove from the bottom of the left circle with just 34 seconds left in the opening frame, giving Moose Jaw a 2-1 lead after one.

The Broncos went back to the man advantage early in the second period, and then were given an extended five-on-three after Owen Pickering was pushed into the boards from behind by Robert Baco. Baco was given a five-minute major and the Broncos scored just 10 seconds into the five-on-three as Birnie redirected a centring pass from Filmon to tie the game at two.

Grayson Burzynski then gave the Broncos their first lead of the game on the same power play, ripping a shot from between the circles off the crossbar and in 4:37 into the frame.

The offence continued to shine for Swift Current in the second period when Josh Filmon tipped a shot from Josh Fluker past Justen Maric to make it 4-1, and Tyson Yaremko finished off a no-look drop pass off the rush from Landon Roberts just over a minute later to make it 5-1.

The Warriors pushed back and eventually cut the Broncos lead to two on a breakaway from Firkus as the two teams went to the locker room with Swift Current leading 5-3.

Moose Jaw added another breakaway goal, this time shorthanded, to pull within one just five minutes into the third, but that was as close as they would come as the Broncos held on for the 5-4 win.

The two teams will meet again Saturday night at the InnovationPlex.