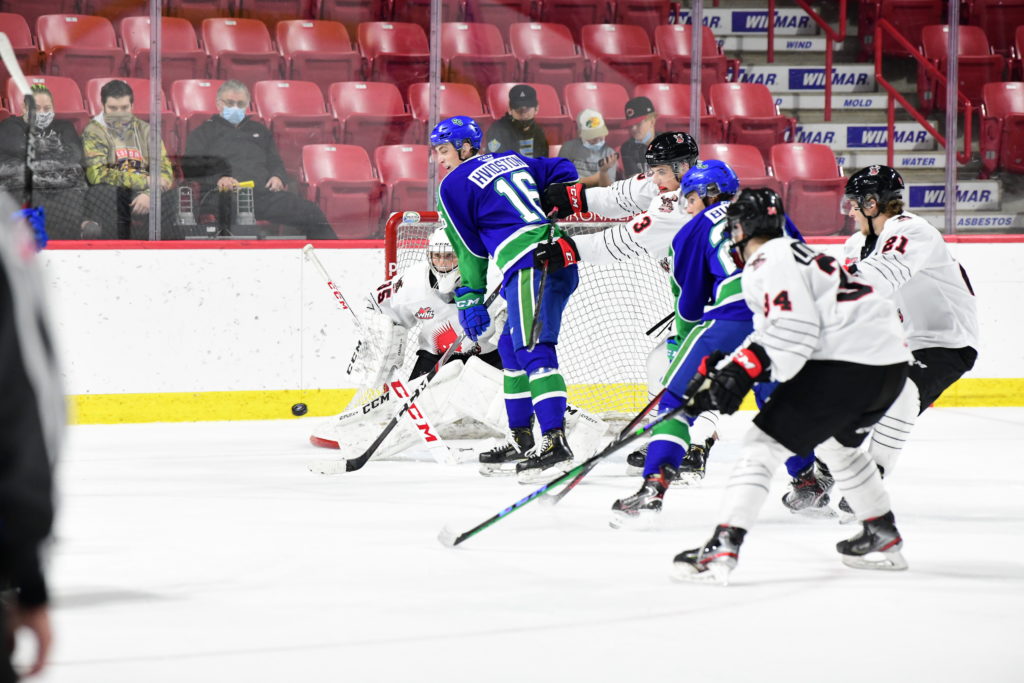 Swift Current, Sask. – The Swift Current Broncos cut Moose Jaw’s lead down to one late in the third period, but couldn’t complete the comeback in a 5-2 loss Saturday night.

The Warriors opened the scoring near the halfway mark of the opening period with Tate Schofer firing a shot off a partial break over the blocker of Jacob Herman.

Moose Jaw added to their lead in the final minute of the period when Max Wanner’s long shot eluded Herman to make it 2-0 after one. The shots read 10-8 Moose Jaw.

Moose Jaw pushed their lead to 3-0 through 40 minutes on a goal by Robert Baco. Swift Current had three power-play opportunities in the middle frame, but wouldn’t strike on the man advantage until the third.

With Kade Runke in the box for hooking, Raphael Pelletier took a feed in the slot off the rush and beat Carl Tetachuk to cut the Warriors lead to 3-1 with 12:30 left in the game.

Five minutes later, on another power play, Josh Filmon planted himself in the slot and took a pass from Carter Stebbings before scoring to bring the Broncos to within one with just over seven minutes to go in regulation.

Brayden Yager snatched the momentum back for Moose Jaw a minute later, restoring the Warriors two-goal lead with 6:12 remaining.

Rayan Bettahar took a cross check in the face from Baco with 5:11 left, putting the Broncos on a five-minute power play and a chance to cut into the Warriors lead.

Despite some extended zone time, the Broncos couldn’t take advantage and Calder Anderson would hit the empty net while shorthanded to make the final score 5-2. Herman finished with 32 saves for the Broncos.

Swift Current is now set to wrap up their pre-season schedule next weekend with a home and home set with the Medicine Hat Tigers.