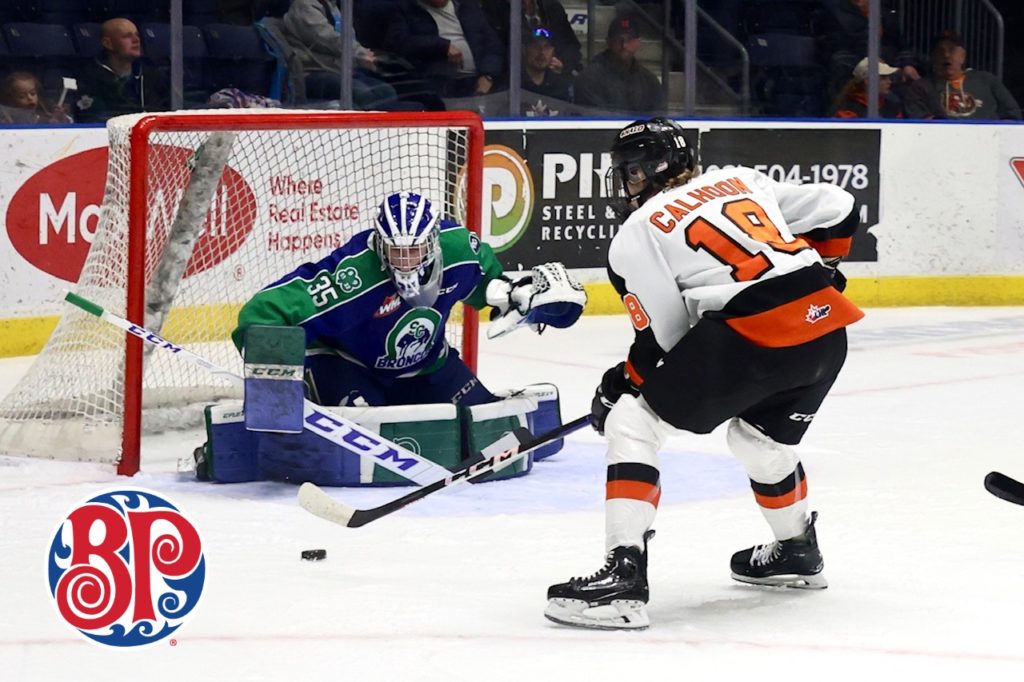 Medicine Hat, Alta. – The Swift Current Broncos (22-18-0-2) trailed the Medicine Hat Tigers (19-20-5-0) 3-1 entering the third period on Sunday, but scored twice to tie the game before Josh Davies netted the overtime winner, completing the comeback with a 4-3 win.

Swift Current ran into penalty trouble to start Sunday’s game, including a lengthy 1:53 five-on-three for the Tigers, but thanks to some stellar goaltending by Joey Rocha escaped without giving up a goal.

Shortly after the two-man advantage ended Medicine Hat took the lead. A turnover in the Broncos zone resulted in Oasiz Wiesblatt feeding Pavel Bochorov in the right circle, putting the Tigers up 1-0 with 7:30 remaining in the period.

The Broncos got their first power play of the game shortly after the goal and took advantage to tie the game. Mathew Ward had the puck near the goal line and quickly threw it across the crease for Josh Filmon, beating Beckett Langkow through the five hole. It was Filmon’s 30th goal of the year.

The two teams went into intermission tied at one, though the Tigers were heavily outshooting the Broncos 17-5.

The Tigers regained their lead early in the second period. A Broncos shot off the rush missed the net, wrapping around the boards and sending Medicne Hat the other way. Cayden Lindstrom took a backhand shot from the slot that was stopped, but Dallon Melin tapped in the rebound 4:50 into the second.

The score remained 2-1 until late in the period when the Tigers added to their lead. After doing a lap of the Broncos zone, Wiesblatt centred for Andrew Basha who scored from the left circle, putting the Tigers up 3-1 with 2:49 remaining.

With 10 seconds left in the period, Filmon took a high hit from Bogdans Hodass in the neutral zone, and Ward came to his defence as Ward and Hodass dropped the gloves. The Broncos received a power play when the dust settled which carried into the third.

Swift Current’s comeback began nearly eight minutes into the third. After a Tigers turnover in their own zone, Connor Hvidston worked the puck toward the left circle for Owen Pickering who was pinching in from the point.

Pickering dragged the puck around a Tigers stick before firing the puck over Langkow’s glove to bring the Broncos within one with a little over 12 minutes to play.

The Broncos seem to get better as the period went along, eventually tying the game off a lucky bounce. Hvidston saw Pickering heading towards the net from the left point and tried to feed him the puck across the ice.

The pass deflected off a Tigers player and bounced right into the back of the net, passed the blocker of Langkow to tie the game with just 2:24 remaining.

In overtime the Tigers came close to negating the Broncos comeback as Hunter St. Martin hit the post from the right circle. The goal light and goal horn went off, but the official on the goal line waived no goal and the overhead replay clearly showed the puck never crossed the line.

That set the stage for the Broncos to complete their comeback. Sam McGinley had his man tied up deep in the Broncos zone and Josh Davies came in to dig the puck loose.

Davies then chipped the puck around a forechecker, creating a two-on-one rush into the Tigers zone. Davies skated into the right circle before snapping a shot past Langkow’s blocker, winning the game for Swift Current.

The Broncos are now set to begin their U.S. Division road trip, which gets underway Friday against the Portland Winterhawks (30-8-2-1).