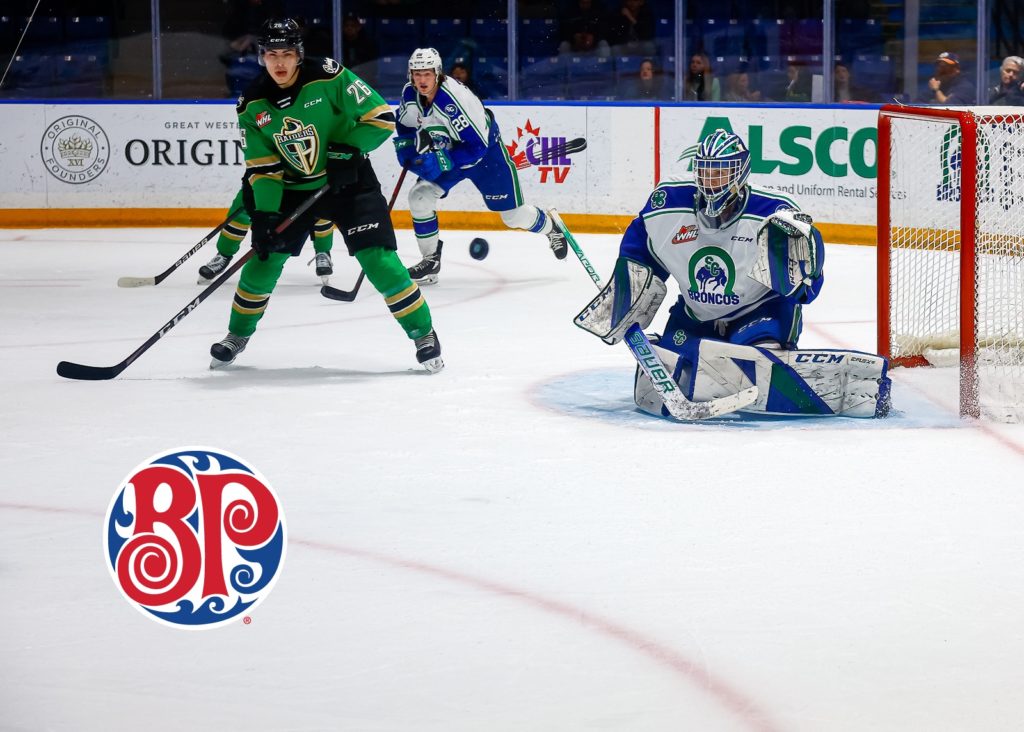 Swift Current, Sask. – The Swift Current Broncos (26-35-5-2) dropped a 4-1 decision to the Prince Albert Raiders (27-35-4-1) Friday night, ending their 2021-22 regular season. Their playoff hopes are still alive, although they need plenty of help from other teams to make it happen.

The Raiders got on the board over the halfway mark of the first period, scoring just 15 seconds into their first power play of the game. Sloan Stanick had the puck on the goal line and tried to centre to the slot, but the puck deflected off one Broncos stick and then off another leg, and bounced over the glove of Isaac Poulter and into the net.

The Raiders took that 1-0 lead into the intermission, outshooting Swift Current 12-8.

The Broncos wasted no time getting on even terms in the second period. Just 27 seconds into the middle frame, Eric Van Impe had the puck in the left circle of the Raiders zone and centered for Cole Nagy.

Nagy used a Raiders defender as a screen, and fired a low shot under the glove of Tikhon Chaika to pull the Broncos even with his 14th goal of the season.

The game remained tied at one for just four minutes before Prince Albert restored their lead. Carson Latimer had the puck in the right circle of the Broncos zone and was in tight on Poulter, but was able to lift the puck over the shoulder of the Broncos goaltender and into the net to restore their lead.

After the Broncos failed to connect on their first and only power play of the game, Prince Albert then added to their lead with another power play goal. With just three seconds remaining in the man advantage, Vladislav Shilo took a one timer from the right circle to push the Raiders ahead 3-1 with 6:44 to go in the second period.

The teams went into the intermission with the Raiders holding that 3-1 lead and the shots 20-17 Raiders.

As expected the Broncos ramped up the pressure in the third period, eventually outshooting the Raiders 16-8 over the final 20 minutes, which doesn’t include Connor Hvidston hitting the post on a shot from the slot.

Chaika stood tall for the Raiders in the crease and Evan Herman would find the empty net from the neutral zone to seal the 4-1 win for Prince Albert.

The loss doesn’t eliminate the Broncos from playoff contention, but their chance to make the post season now hangs in the balance of three other teams.

If all those scenarios happen, the Broncos would get another crack at the Raiders in a one-game play in next week for the final playoff spot.