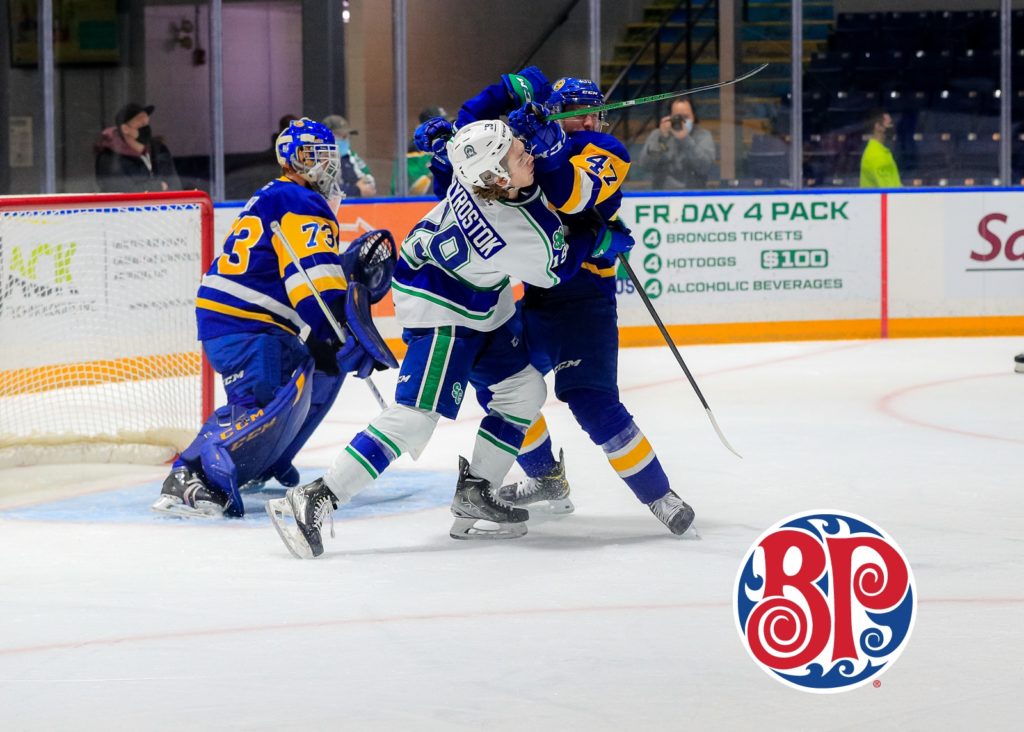 Swift Current, Sask. – The Swift Current Broncos (13-16-4-1) were unquestionably the better team over the second half of the game on Friday night, but the Saskatoon Blades (18-14-1-1) held on for a 6-4 win at the Innovation Credit Union iPlex.

The Broncos came out with a strong penalty killing performance early in the first period, but the Blades would open the scoring on their second power play of the period. After a cross-seam pass was deflected, Tristen Robins chased it down before turning and firing it on net, beating Reid Dyck on the blocker side 8:58 into the game.

Swift Current responded quickly to tie the game. Off the rush, Raphael Pelletier was looking to slide the puck between the Blades defence for Josh Davies who was streaking to the net. The pass missed Davies, but Nolan Maier never saw it and it slid right past him to tie the game at one heading into the intermission.

The Broncos answered back at the 11:33 mark of the period as Brady Birnie threw a rebound shot towards the net which went off the pad of Maier and in, giving the Broncos life at 4-2. The goal clearly energized the Broncos as they began hemming the Blades in their own zone for long stretches of time, but would head into the intermission trailing 4-2.

The Broncos continued their strong play into the third period, but the Blades extended their lead against the flow of play. Kyle Crnkovic forced a turnover behind the Bronco net before hooking the puck up to the blue line. Charlie Wright fired a shot through traffic, beating a screened Reid Dyck to give Saskatoon a 5-2 lead.

The Broncos quickly shrugged off the goal and continued creating opportunites for themselves, eventually cutting in the Blades lead again.

Eric Van Impe’s cross-crease pass was blocked, but then picked up in front of the net by Birnie who worked it toward the crease. The puck went off the skate of Josh Davies and in, giving Davies his 10th of the season and a three-game goal scoring streak.

The Broncos got their first power play of the night with 3:44 left in the third but were unable to cut the Blades lead to one until the final minute.

While shorthanded, the Broncos blocked a cross-ice pass and took off on a two-on-one rush. Carter Stebbings threw the puck across for Cole Nagy who wired in his eighth of the year past the blocker of Maier, cutting it to a 5-4 game with one minute remaining.

Still shorthanded, the Broncos pulled the goaltender for the extra attacker, but Robins completed his hat trick by hitting the empty net with 28 seconds left to seal the 6-4 final.

The two teams wrap up their season series with a 7:00 puck drop in Saskatoon on Saturday.