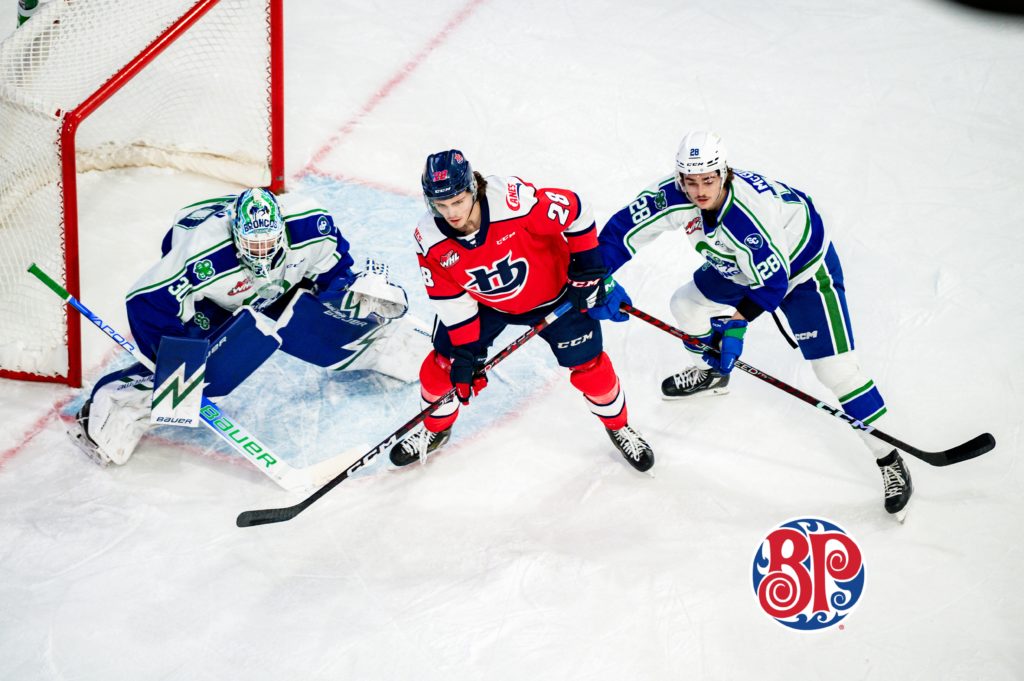 Lethbridge, Alta. – The Swift Current Broncos (8-9-0-0) got a stellar performance by Reid Dyck Saturday night, but Lethbridge Hurricanes (10-8-0-1) goaltender Harrison Meneghin was one better, turning aside 31 shots in a 2-1 Lethbridge win.

The Hurricanes had an early goal waived off. During a goal-mouth scramble, Dyck fell over backwards and the net was knocked off its moorings just moments before Jett Jones scored. The goal was reviewed by the officials and eventually waived off, keeping the game scoreless.

The disallowed goal allowed the Broncos to take the lead shortly after. Connor Hvidston skated down the left wing into the Hurricanes zone and tried to hook the puck across the slot to Brady Birnie.

His pass deflected off a Lethbridge stick and right to Caleb Wyrostok who fired a shot over the glove of Meneghin to give the Broncos a 1-0 lead, 7:52 into the first period.

Neither team could score on their power play opportunities in the opening period as the Broncos carried the 1-0 lead into the intermission, outshooting Lethbridge 12-10.

Swift Current had numerous high-quality scoring chances on the power play in the second period, but were denied by Meneghin at every turn. That included partial breaks for Birnie and Hvidston, and a one timer by Josh Filmon in the right circle that Meneghin got his glove on.

After missing on three straight power plays, including a four-minute double minor, the Broncos went to the penalty kill for just the second time in the game and the Hurricanes tied it up.

A shot from up high missed the net and came off the end boards, before being sent through the crease to the glove side of Dyck. The Broncos goaltender couldn’t find the puck before Logan Warmold fired it into the open net, tying the game at one with 2:23 to go in the second period.

The Broncos began the third period in a tough spot having to kill off a few penalties to begin play, surviving 1:19 of 5-on-3 for Lethbridge to keep the game tied. As the first penalty came to an end, Sam McGinley stepped out of the box and took a breakaway pass, but was denied by Meneghin to keep the game tied.

Dyck saved his past for last in the third period, being peppered with 16 shots over the final 20 minutes. It wasn’t until the second half of the period that Lethbridge took the lead.

Off the rush, Nolan Bentham took a drop pass and his shot from the slot deflected off a stick, fluttering past Dyck’s glove and into the net, giving Lethbridge a 2-1 lead with 7:38 remaining.

The Broncos ran into more penalty trouble in the final minutes, having to kill off another 5-on-3 power play before pulling the goalie for the extra attacker. The Hurricanes were happy to continually ice the puck, killing off six seconds at a time before time eventually ran out, and the Broncos fell 2-1.