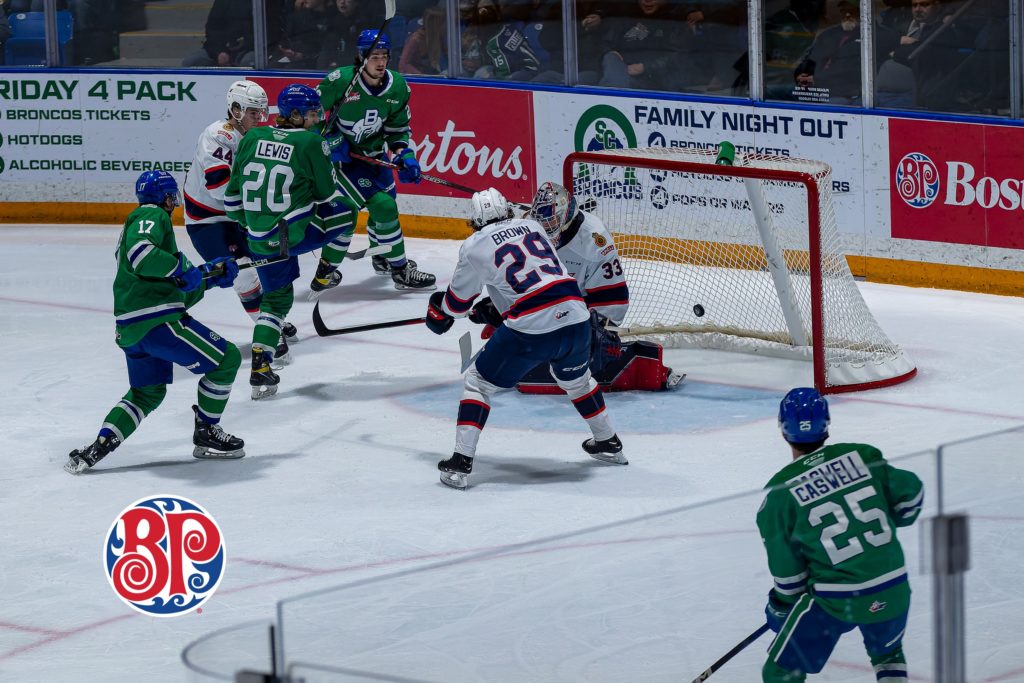 A fast-paced start to the game saw both teams with great chances, including Reid Dyck denying Borya Valis on a breakaway 90 seconds into the game.

The Pats went to the power play 8:26 into the game and took a 1-0 lead. Connor Bedard picked up the puck along the left-wing boards and skated into the slot before wiring a shot over the shoulder of Dyck 8:57 into the game.

Dyck later robbed Bedard of his second off the game with a right-pad save off a one timer while the Pats were rushing into the Broncos zone.

Swift Current went to their first power play of the night when Sam Oremba was called for tripping, with the best chance on the man advantage being Josh Filmon getting stopped off a shot from the right-wing circle.

The first period came to an end with Regina leading 1-0 and outshooting the Broncos 18-10. The Pats would also begin the second period with 55 seconds of power play time.

It was a bit of a reversal of roles in the second period as the Broncos were clearly the better team over the middle 20. After killing off the penalty to start the period the Broncos went to the power play four minutes later.

On the man advantage, Sam McGinley skated down the left wing before centring for Josh Davies who snapped a one timer through the five hole of Drew Sim to tie the game at one. It was Davies’s 11th goal of the season.

Swift Current outshot the Pats 13-3 in the second period and nearly took a 2-1 lead late, but Filmon was robbed on a cross-crease chance by Sim as he stretched out to his left and denied the Broncos leading goal scorer of his 29th of the year.

The Broncos finished the second period on the power play, going to the man advantage with 2:01 remaining, but couldn’t capitalize is the two teams hit the intermission tied at one.

Regina regained their lead early in the third period. Parker Berge took a slap shot from the blue line through traffic, beating a screened Dyck blocker side to put the Pats up 2-1 just 2:32 into the third.

The score remained 2-1 until the second half of the second period when the Broncos comeback began. It started on a play that didn’t appear to be very dangerous.

Mathew Ward skated into the Regina zone and lost control of the puck as it kept sliding toward the net. The puck was caught in skates and while falling to the ice, Josh Filmon swept it toward the net, sneaking it through the five hole of Sim to tie the game at two. It was the eighth straight home game Filmon had scored in.

Off the next shift the Pats went to clear the puck out of their zone, but it hit a stanchion and deflected into the high slot. Braeden Lewis picked it up before sliding it across the zone to Davies. From the bottom of the left circle, Davies quickly sent it to the crease where Drew Englot tapped it past Sim for his first as a Bronco, giving Swift Current a 3-2 lead with two goals in 34 seconds.

Minutes later Davies had a burst of speed coming down the left wing, stepping around Tanner Brown and getting slashed by the Regina defender, sending the Broncos back to the power play.

On the man advantage, Davies muscled his way through the neutral zone, stepped around the last Regina defender and fired a shot over the blocker of Sim from the right circle, picking up his second of the game to give Swift Current a 4-2 lead with 2:09 left.

Frustration started to boil over for Regina in the final two minutes as they took two roughing penalties during a post-whistle scrum in the Broncos end, sending the Broncos to the power play with 57 seconds remaining.

The Broncos kept possession for the final minute, winding down the clock to a 4-2 win.

The two teams will now wrap up their season series Saturday night at the Brandt Centre.