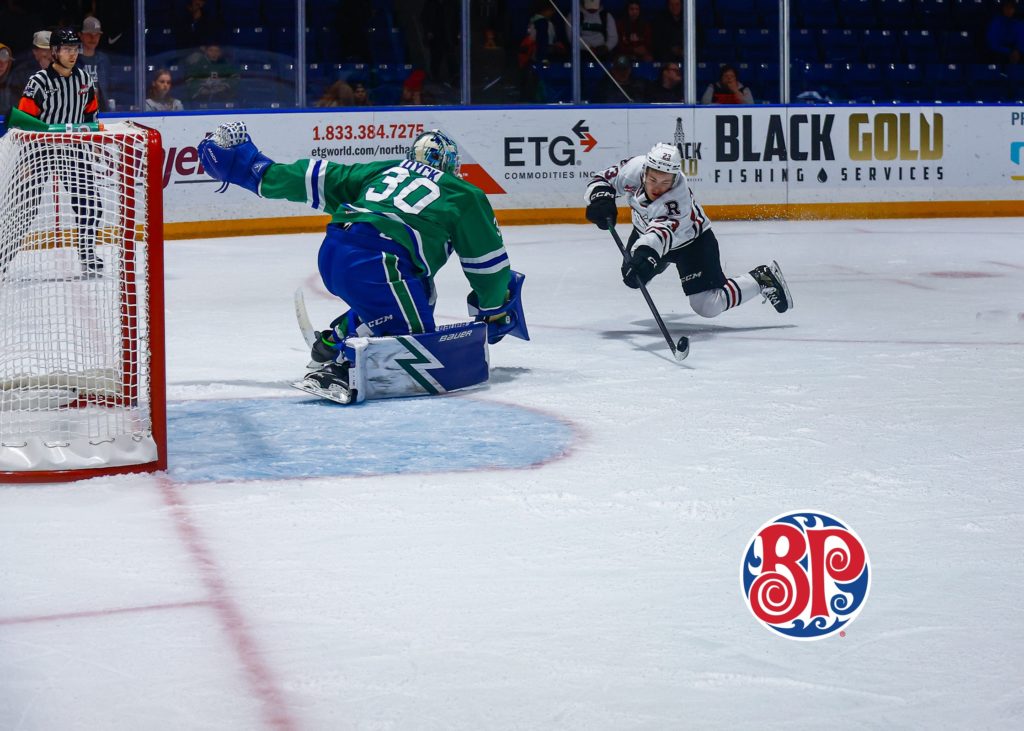 Swift Current, Sask – The Swift Current Broncos (6-8-0-0) got a little too undisciplined against the Red Deer Rebels (14-0-0-0) Friday night, and it cost them in a 4-1 loss at the InnovationPlex.

Swift Current had an excellent scoring chance just seconds after puck drop, but Brady Birnie was denied by Kyle Kelsey on a cross-ice chance deep in the Rebels zone.

The opening 20 minutes were dominated by the two goaltenders, with Reid Dyck denying Talon Brigley on a shorthanded breakaway chance a few minutes into the game, and also stopping Jayden Grubbe with a confident, calm glove save while the Rebels were on their lone power play of the period.

Kelsey was equally as locked in at his end of the ice, stopping good scoring chances on Josh Filmon and Owen Pickering in the final minutes of the period with Swift Current on the power play. Shots read 10-8 Rebels after one as the two teams into the intermission scoreless.

The game remained scoreless until midway through the second period when the Broncos ran into some penalty trouble. Caleb Wyrostok was called for kneeing on Kalan Lind, sending the Rebels to their second power play of the night.

Christoffer Sedoff let a long shot go from the blue line that was tipped by Kai Uchacz to give Red Deer a 1-0 lead 10:36 into the period.

Discipline came to the forefront for the Broncos shortly the goal, as they got locked in on trying to go after Rebels players away from the puck, sending them to the box on multiple occasions. Red Deer added to their lead with a second power play goal a few minutes later when Hunter Mayo fired a shot past Dyck from the left circle just six seconds into the man advantage.

The Broncos got a goal back a couple minutes later. Mathew Ward saw Josh Filmon flying up the middle of the ice and fed him a hard pass. Filmon slowed the puck with his stick, then used his speed to chase it down before chipping it over the glove of Kelsey to make it 2-1 with 2:37 remaining in the second period.

Red Deer added to their lead 6:51 into the third period. Kai Uchacz picked off a drop pass as the Broncos gained the Rebels line and turned the other way one-on-one against Raphael Pelletier who was covering defensively.

Uchacz cut across the slot and lifted a backhand shot past Dyck’s glove, putting the Rebels up 3-1.

The Broncos had plenty of chances in the third period, including Ward hitting the post on a one timer from the slot when the game was still 2-1. Swift Current had back-to-back power plays after Red Deer added to their lead, but couldn’t capitalize before the Rebels put the game away.

Right after the second power play expired, Frantisek Formanek, serving the too many meny call, took a breakaway pass out of the penalty box and beat Dyck with a backhand fake to make it 4-1 with 6:57 to go.

The Broncos again ran into penalty trouble late in the game, giving Red Deer a 5-on-3 to finish regulation, but Dyck robbed the Rebels numerous times in the final minute to keep the final score 4-1.