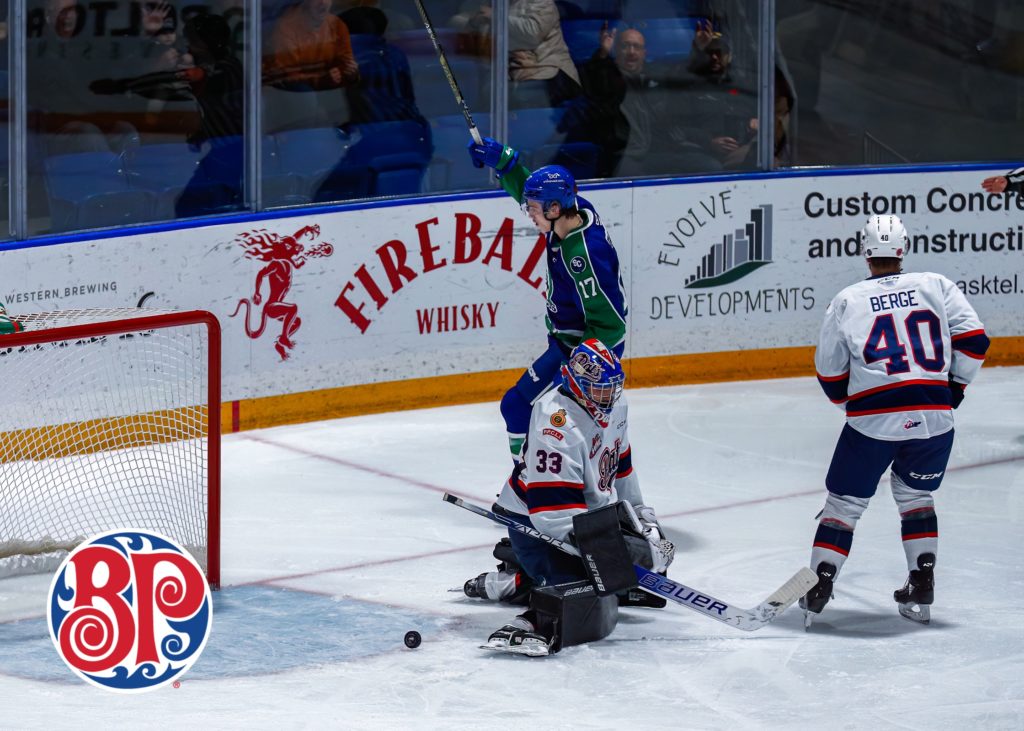 Regina went to the power play just 25 seconds into the game, but Gage Alexander stood tall in the Broncos crease, denying a number of high-quality chances by the Pats to keep the game scoreless.

A few minutes later, Regina opened the scoring. Easton Armstrong took a drop pass in the right circle off the rush and snapped a shot past the blocker of Alexander to give Regina a 1-0 lead, 4:42 into the game.

Swift Current went back to the penalty kill a few minutes later which allowed Regina to extend their lead. Alexander Suzdalev and Connor Bedard fed the puck across the slot to each other with Suzdalev firing home a one timer, pushing Regina’s lead to 2-0 halfway through the first period.

The Pats carried that lead into the first intermission, outshooting Swift Current 18-12 in the process. The second period was a different story.

Just 1:06 into the period, Mathew Ward took a pass from Josh Filmon while alone behind the Regina defence, and went between the legs before beating Drew Sim five hole to get the Broncos on the board.

A few minutes later, after some extended pressure in the Pats end, Josh Davies took a pass from Caleb Wyrostok and fired a shot past the blocker of Sim, tying the game at two with his fourth goal of the year.

The Broncos then killed off two straight power plays before taking their first lead of the night. After hemming the Pats in their own zone for a long time, Regina cleared the puck to centre and the Broncos regained control quickly.

Connor Hvidston skated down the slot and used the Pats defender as a screen, snapping the puck over the shoulder of Sim for his fifth of the year, giving Swift Current a 5-3 lead 11:13 into the period.

Two and a half minutes later, Filmon received a pass from Pickering and skated down the left wing of the Pats zone, outwaiting Sim before stepping around the Regina goaltender and sliding the puck into the net to make it 4-2.

The Broncos took that lead into the intermission, flipping the game on its head going into the third period.

Regina wouldn’t back down however, and Bedard pulled his team back on even terms on his own. His first goal of the night came 3:16 into the period but had to be reviewed. A sharp-angle shots from Suzdalev snuck under the blocker of Alexander and went off Bedard’s skate and in.

The officials reviewed the goal for a potential kicking motion, but eventually ruled it a good goal to make it a 4-3 game.

A few minutes later, Bedard picked up a between-the-legs goal of his own at the side of the Broncos net, getting Regina back on even terms at four.

The two teams then traded chances in the third period, but neither could take the lead as the game went to overtime.

Swift Current won the opening faceoff in overtime and never relinquished control of the puck. After Pickering tried to feed Hvidston the puck at the front of the net, the two switched places and Pickering took a pass while coming down the slot, pulling the puck to his backhand and beating Sim glove side to win the game for the Broncos.

Swift Current will now hit the road as they head to Lethbridge for the third meeting with the Hurricanes (9-8-0-1) Saturday night.