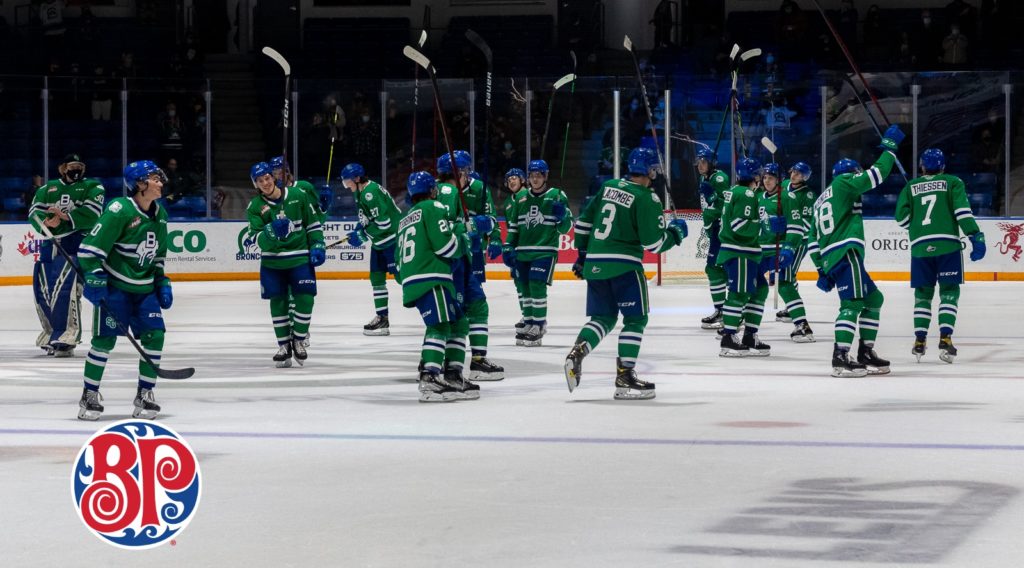 The Warriors had plenty of early chances in the first period, but Isaac Poulter stood tall in his crease and turned aside all 14 shots he faced in the opening 20 minutes.

The Broncos best chances in the first came off a shot from Mathew Ward on the power play that hit the cross bar, and a breakaway for Josh Filmon who was turned aside by Carl Tetachuk.

An early power play in the second period created numerous chances in tight for the Broncos, but it was Tetachuk’s turn to stand tall as he made save after save to keep the game scoreless.

In the final minutes of the period Caleb Wyrostok was called for tripping and slashing in the same stoppage, giving Moose Jaw a lengthy power play, but it was Swift Current taking advantage.

In the dying seconds of that power play, Connor Hvidston poked the puck away from the Moose Jaw defence at the Bronco blue line and took off for a shorthanded breakaway.

Hvidston’s stick was lifted by the trailing defenceman and the puck rolled in on Tetachuk, but the rebound sat free in the crease and Hvidston jumped on it to open the scoring with 1:04 left in the second.

The Warriors tied the game early in the third on a pass that deflected off a body, up into the air and floated over the glove of Poulter 1:22 into the period.

Both teams had a power play in the third period but neither could connect. Cole Nagy hit the cross bar on a shot from the right circle in the late stages of the period.

The Warriors had the first two possessions of overtime, but the Broncos ended the game on their first possession.

Ward skated into the left circle and stepped around Ryder Korczak with a toe-drag move. The puck then came to Filmon at the bottom of the circle and he quickly worked it up to Pickering who let go a one timer from between the circles, over the glove of Tetachuk for the winner 56 seconds into overtime.

The two teams will meet again Saturday night in Moose Jaw to wrap up the home-and-home set.