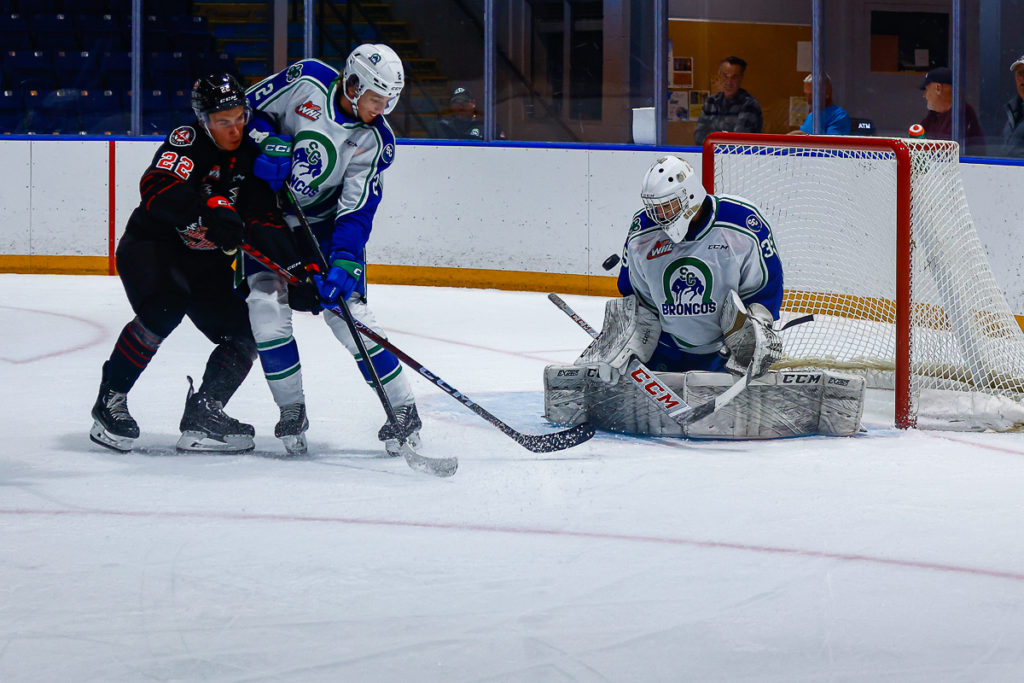 Swift Current, Sask. – Joey Rocha turned aside 30 of 31 shots sent his way as the Swift Current Broncos picked up a 3-1 win over the Moose Jaw Warriors Saturday night, sweeping their exhibition home-and-home set.

The game had a slow start as neither team established sustained pressure in the first half of the opening frame. It wasn’t until a late power play that the Broncos opened the scoring.

After Josh Davies’s redirect shot was stopped by Justen Maric, the rebound came to Connor Hvidston who fired a low shot on goal. Maric kicked out the left pad to make the save, but the puck slid right to Ty Coupland who shot it into the open net with 2:20 left in the first period.

Shot read 10-8 after the first period with the Broncos taking the 1-0 lead into the intermission.

Moose Jaw pulled even just two minutes into the second period when Nathan Pilling tipped in a shot from the left point to tie the game. Swift Current quickly snatched the momentum back on the very next shift.

After Sam McGinley’s shot was caught by Maric, Rylan Gould knocked the puck loose and tucked it into the open net to restore the Broncos lead just 25 seconds after the Warriors had tied the game.

The 2-1 lead held up for the remainder of the period, though the Warriors came close to tying on a pair of occasions as they hit the post twice throughout the second.

The Broncos then added to their lead in the opening minute of the third period on a power play that carried over from the second. Grayson Burzynski’s shot from the left circle was stopped, but the rebound landed on the tape of Hvidston who roofed it over the outstretched Maric to put the Broncos up 3-1.

Rocha stood tall for the Broncos in the third period, stopping all 13 shots sent his way over the final 20 minutes as the Broncos skated away with the 3-1 win.

Next pre-season action for the Broncos goes Tuesday when they travel to Affinity Place in Estevan to play the Regina Pats.