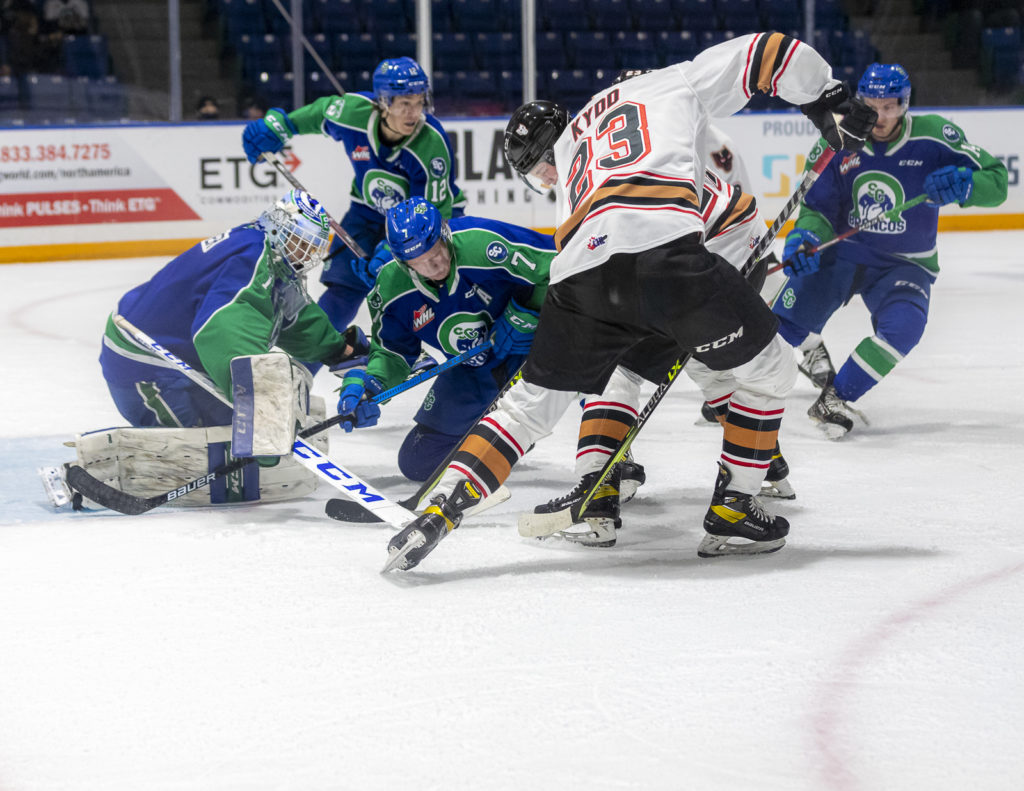 David Adaszynski opened the scoring for Calgary, beating Isaac Poulter under the glove while flying down the left wing 7:43 into the game. After Swift Current was unable to take advantage of a power play chance a few minutes later, Calgary added to their lead.

A quick passing play saw Zac Funk work the puck to the slot for Sean Tschigerl who quickly wired home his third goal of the season over Poulter’s glove to give the Hitmen a 2-0 lead after one. Shots read 16-8 Calgary through 20.

The Broncos killed off a carry-over penalty to start the second period but the Hitmen added to their lead shortly after it expired. Riley Fiddler-Schultz spotted Tschigerl heading to the net and fed the puck across the crease for Tschigerl to redirect in for his second of the game.

Calgary scored twice less than a minute apart with Fiddler-Schultz and Blake Allan each recording their first goals of the season to push Calgary’s lead to 5-0 after 40 minutes.

The Broncos third period was certainly their best of the night as they started to get pucks toward Brayden Peters, aided by three power plays. While they couldn’t score on those man advantages, they did end the shutout bid for Peters late.

After Evan Toth broke his stick trying to clear the puck, Brady Birnie dug it out from between Toth’s skates and sent it to the net. Caleb Wyrostok was stopped on the initial chance but then batted the rebound out of mid-air with 2:25 to go in regulation.

Josh Filmon then quickly added another goal, taking advantage of Peters trying to play the puck in the slot but dropping his stick. Filmon fired the puck off the post and in to cut the score down to 5-2 with 1:32 to play, but that was all the Broncos got in the 5-2 loss. Final shots read 38-20 in favour of Calgary.

The Broncos now have a full week of practice ahead of them before they welcome the Regina Pats on Friday.