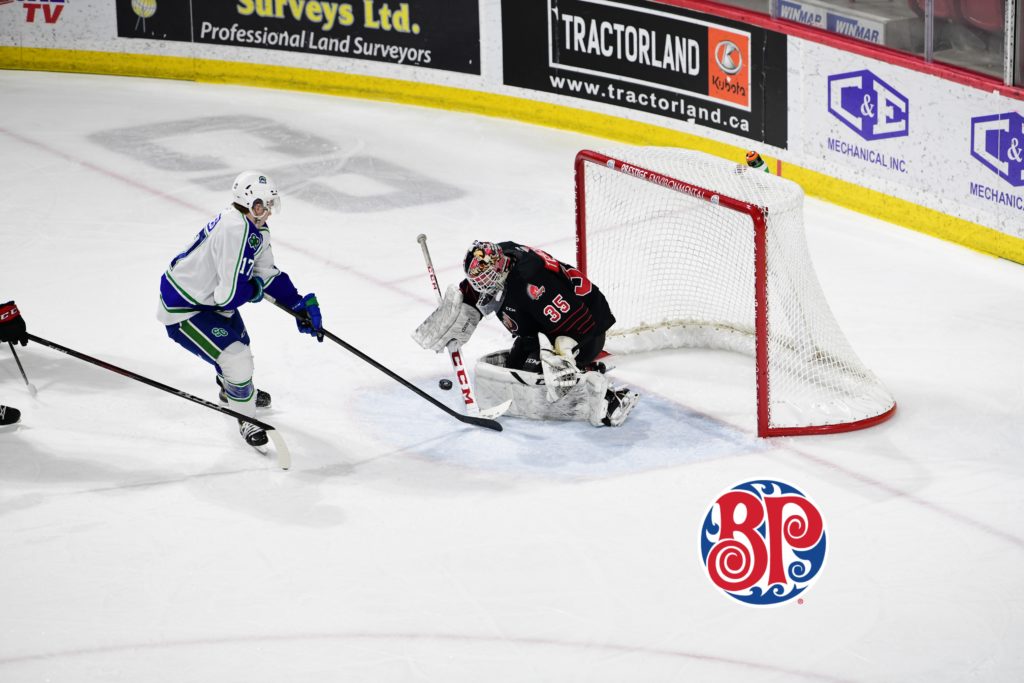 Moose Jaw, Sask. – The Swift Current Broncos (7-12-2-1) were neck and neck with the Moose Jaw Warriors (9-10-1-1) through two periods on Saturday night, but the Warriors pulled away with three third-period goals in a 6-2 game.

The Warriors came out strong, peppering Reid Dyck in the opening minutes, but the Broncos goaltender made a number of key saves to keep the game tight.

The Broncos took two early penalties in the game and Moose Jaw would capitalize on the second one. Jagger Firkus skated in from the right circle and fired a shot off the crossbar and in to give the Warriors a 1-0 lead 6:15 into the game.

Cole Nagy answered back quickly, blocking a shot as his blue line and taking off on a breakaway, faking a shot before pulling the puck to his backhand and beating Carl Tetachuk to tie the game.

The Warriors responded a few minutes later with Cade Hayes taking a centering feed from behind the net to restore Moose Jaw’s lead, but the Broncos again answered quickly to tie the game.

Raphael Pelletier worked the puck up to the blue line for Owen Pickering who let a one timer go, beating a screened Tetachuk through the five hole as the two teams went into the intermission tied at one. Shots read 20-18 Moose Jaw after 20 minutes.

Moose Jaw jumped ahead for the third time early in period two. Off a faceoff win in the Broncos zone, the puck came to Ryder Korczak in front of the Broncos net and he cut across the crease to get Dyck to go down before sliding the puck into the net on his backhand 1:49 into the second.

The Broncos had three consecutive power plays in the third period, but couldn’t connect on any of them as they went into the intermission trailing 3-2.

Moose Jaw pulled away in the third period, holding the Broncos to just two shots on net while scoring three times from Daemon Hunt, Firkus and Denton Mateychuk, pulling away for a 6-2 win.

The Broncos are back on home ice against the Brandon Wheat Kings (9-10-0-0) on Wednesday night.