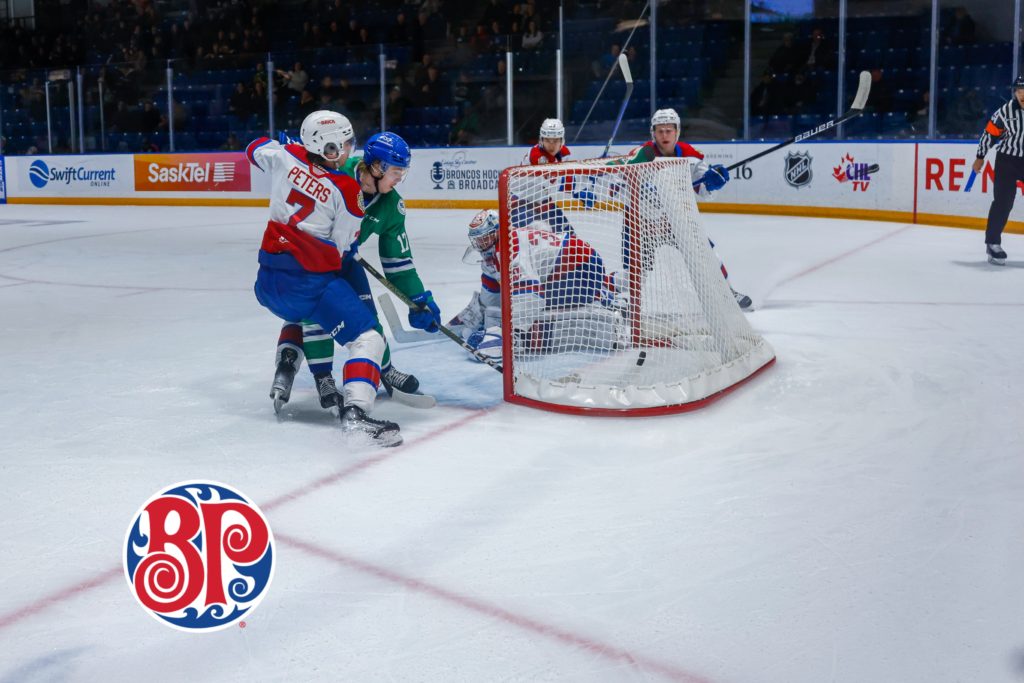 Davies first goal of the night came near the halfway mark of the first period. After Josh Filmon was able to work the puck out of his skates along the left-wing boards, Davies threw it on goal and it snuck past Kolby Hay for Davies’s sixth of the year.

Five minutes later, while shorthanded, Davies pounced on a loose puck in the Edmonton zone following a turnover and skated down the slot. His backhand chance in tight was stopped but Davies got his own rebound and tapped it in to give the Broncos a 2-0 lead with the shorthanded marker.

Reid Dyck came up with one of his finer saves of the night shortly after, denying Gavin Hodnett on a shorthanded breakaway to keep the Broncos’ 2-0 lead intact heading into the intermission.

Adam McNutt threw a massive open-ice hit on Luca Hauf midway through the second period, and was sent to the box for an unsportsmanlike penalty after he dropped his gloves anticipating a fight from Ethan Peters.

While on that penalty kill, Davies scored his second shorthanded goal of the night when he intercepted a pass in the Oil Kings zone and beat Hay under the glove on the partial breakaway, completing his first career hat trick.

Edmonton cut into the lead with a power play goal courtesy of Carson Golder a few minutes later to make it a 3-1 game, but Swift Current quickly regained their three-goal lead.

Off a faceoff win in the Edmonton zone, Mathew Ward fired a shot on net that handcuffed Hay and slid into the goal for Ward’s 11th of the season.

This time it was Edmonton’s turn to respond quickly as Hodnett jumped on a rebound with 28 seconds to go in the period and the two teams went into the intermission at 4-2.

The Oil Kings seemed revitalized by the goals and started to put more pressure on the Broncos in the third period, but Dyck came up with the saves he needed to make to keep the Broncos ahead.

McNutt would cap off the scoring by firing the puck the length of the ice and into and empty net while on the penalty kill with seven seconds to go, sealing the Broncos victory.

The two teams now get set to see each other again tomorrow night.