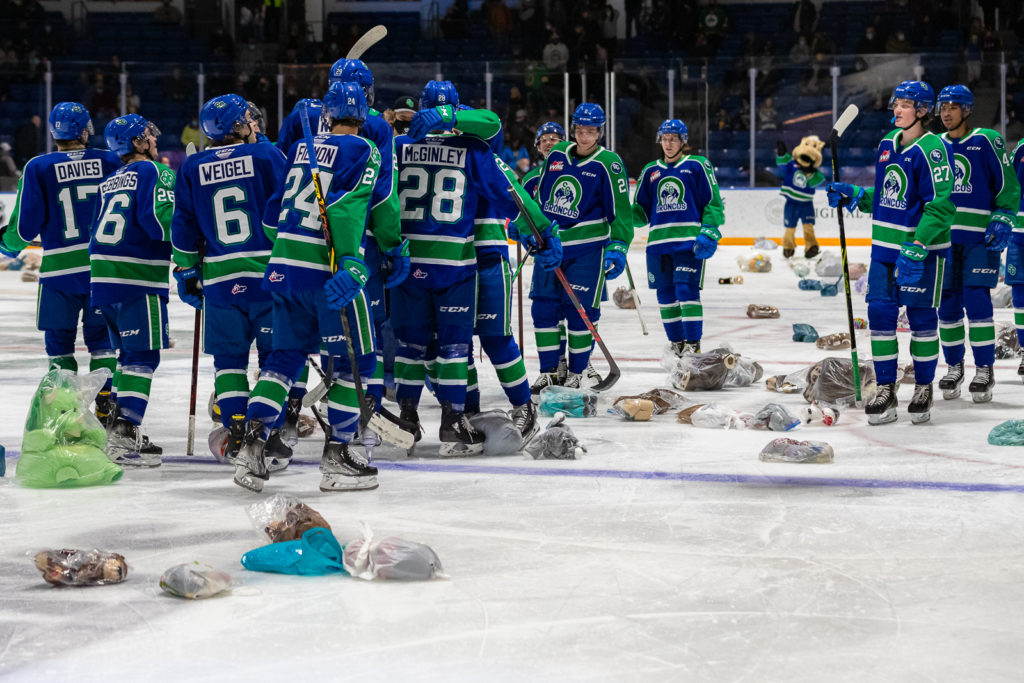 The 2021-22 Western Hockey League season was one that began with cautious optimism for the Swift Current Broncos, and ended with an overwhelming sense of excitement. The team may have fallen just short of their player-driven goal of making the 2022 WHL playoffs, but the strides the team took over the 68-game schedule has put them into an enviable position moving forward.

According to eliteprospects.com the Broncos boasted the third-youngest roster in the WHL this year with the average age of the team sitting at 17.96 years old. Despite that, the Broncos were a competitive team each and every night, winning 26 games and narrowly missing the postseason.

The emergence of the Broncos 2004 age group has pushed their rebuilding cycle along faster than most outside observers had anticipated. Those players accounted for 98 of the Broncos 181 total goals from this season, equal to 54.1 per cent of the offence.

It’s not often a team strikes gold with nearly all of their draft picks in any given year, but the Broncos appear to have done just that with their 2019 WHL Prospects Draft selections. For starters, Mathew Ward is the fourth-highest scoring player from the 2019 draft to date, ahead of all other first-round selections taken in front of him aside from the first and second overall picks.

For seven players on this year’s roster, the disappointment of missing the post season quickly turned to jubilation as they were told they will represent their country at the upcoming 2022 IIHF World U18 Championship, which takes place in Landshut and Kaufbeuren, Germany. The event runs from April 23 to May 1.

Ward, Filmon, Davies, Pickering, Hvidston and goaltender Reid Dyck will don the Maple Leaf for Team Canada while defenceman Rayan Bettahar will represent his home country of Germany on his home soil. The Broncos are the only team in the history of the Canadian Hockey League to have six players on the same Team Canada U18 roster for this event.

The 2004-born players aren’t the only ones on the Broncos roster, however. There were contributions from players of all age groups, including newly-drafted 2006-born players.

Like most clubs, the Broncos had three 2001-born players on their roster this season, two from start to finish and one who joined halfway through. Eric Van Impe was acquired from the Seattle Thunderbirds just after the Christmas break and immediately became the most veteran player on the roster. His steady two-way play and veteran presence was instrumental over the second half of the season. He finished his WHL career with 214 career games and 58 points from the blue line.

Cole Nagy was also acquired shortly after the Christmas break, but in the 2019-20 season, and had been with the Broncos ever since. An imposing figure, standing at 6’6’’ and weighing north of 220 pounds, Nagy became the go-to guy when the Broncos needed a big faceoff win. He finished his WHL career with a 53.6 per cent success rate on the faceoff dot and more than doubled his previous career high in points with 34 in 2021-22. He can also say that he scored in his final WHL game.

Isaac Poulter spent his entire four-year WHL career in Swift Current and became one of the most popular players in franchise history. Joining the team after the 2018 championship run, Poulter was the backbone of the Broncos through some difficult years for the team. Despite the adversity of being on a rebuilding team, Poulter’s mindset never wavered as he came to the rink every day with a smile on his face. He was also regularly found out in the community during team events, always being the first player to volunteer to do so. His commitment to the team, and the community, are what he will be remembered for as he graduates from the WHL.

The Broncos had just three 2002-born players on their roster this season, but all of them had major impacts on the club. Sam McGinley was leaned on heavily to shut down opposing team’s top players while also setting career highs across the board offensively with seven goals and 14 assists in 62 games. He has been a fixture on the Broncos blue line since being acquired from the Regina Pats in November of 2019.

Raphael Pelletier took major strides in his third season with the Broncos, finishing second in team scoring with 47 points (20-27-47) in 64 games. Entering the 2021-22 season, Pelletier had 15 career points (6-9-15) in 69 games. The Legal, Alberta native was also given an ‘A’ on his jersey as he took on a leadership role both on and off the ice.

Carter Stebbings was the Broncos iron man in 21-22 as he was the only player on the roster to suit up for all 68 games this season. Relied upon heavily in defensive situations, Stebbings also provided excellent secondary offence to the tune of 19 points (11-8-19) in his second season in the league. Never one to shy away from blocking a shot or battling in the corner, perhaps the most remarkable statistic about Stebbings is that he has only taken five minor penalties in 84 WHL games.

Only three 2003-born players finished the season with the team, but they all played impactful roles.

Caleb Wyrostok, much like Owen Pickering, has turned into a ninth-round steal for the Broncos as he was drafted 197th overall in 2018. Wyrostok brings an element of scoring and that in-your-face style of play that has cost him a trip to the penalty box on more than one occasion. He is also an emotional leader for the Broncos and was given an ‘A’ on his jersey all season long because of it.

If Braeden Lewis didn’t have bad luck, he might not have any luck at all. The Virden, Manitoba native had to spend half of the 21-22 season on the sidelines due to various injuries throughout the year. When in the lineup, Lewis regularly found himself on the penalty kill and blocking shots to help his team in any way that he could. He was named the Broncos Leadership and Maturity award winner for his contributions this season.

Kayden Sadhra-Kang was acquired from the Lethbridge Hurricanes early in the season and flourished into a legitimate WHL defenceman. Given an opportunity to play a regular shift in Swift Current, Sadhra-Kang took full advantage on his way to posting 13 points (3-10-13) in 57 games. He certainly raised his game when playing against the team that traded him as four of his 13 points came against Lethbridge. He was also far and away the Broncos leader in the +/- category this season, finishing the year with a +11 rating.

It’s not easy to succeed as a 16-year-old in the Western Hockey League, but the Broncos got steady contributions from their three this season. Brady Birnie’s 15 points (6-9-15) paired nicely with his impressive ability to absorb heavy contact and not be phased. The flashes of offensive brilliance that saw Birnie record 128 points in his draft year were evident throughout the year, and his contributions will be felt in the years to come.

Rylan Gould brought his energy to the ice and off it during his rookie season. The jovial forward seemingly had a permanent smile on his face throughout 2021-22 and had solid production with 13 points (4-9-13) in his rookie season.

It was clear to see that Grayson Burzynski’s confidence grew throughout the season on the Broncos blue line. As his confidence grew, the coaching staff’s confidence in him grew with it as he was entrusted with a heavier workload in the second half of the year. Totaling six points (3-3-6) in his rookie season, Burzynski also showed glimpses of the offensive abilities that had him rack up 58 points in his draft year.

The Broncos had mixed results in the 2021 WHL Prospects Draft lottery. Their own first round pick entered the lottery sitting in the 3rd overall position, but dropped down to sixth following the lottery of the bottom six teams. Their other first round pick, acquired from Portland in the Joel Hofer trade of 2019, shot up from 14th overall to 7th overall following the lottery for the middle-tier teams. With those back-to-back picks, the Broncos selected forward Clarke Caswell of Brandon, Manitoba and defenceman Josh Fluker of Boissevain, Manitoba. Both made their mark during their first impressions.

Caswell made his WHL debut January 21 against the Calgary Hitmen. While the Broncos lost the game 5-2, Caswell showed brilliantly on a line with Mathew Ward and Raphael Pelletier. He was robbed of his first career goal in the second period on a cross-crease pass by Ward, but would atone for that by picking up an assist in his second career game the next night, a 3-1 win over the Lethbridge Hurricanes. Caswell had an incredible season with his U18 Brandon Wheat Kings by recording 88 points (35-53-88) in just 38 games, helping the Wheat Kings to a league-leading 33-4-3 record. His 88 points were more than twice as many as the next highest scoring 2006-born player in the MU18HL. Caswell’s season isn’t done yet either as his U18 Wheat Kings are preparing for a winner-takes-all game five in the MU18HL final against the Winnipeg Wild this coming Saturday. Caswell has continued his offensive prowess in the playoffs with 14 points (7-7-14) in 10 games.

Fluker was able to get into more games with the Broncos than Caswell this season as he ended up dressing for 10 games as an underaged player. If his first impression is any indication of his future, the Broncos may have gotten a steal at seventh overall. Touted as the best skater in the 2021 WHL Prospects Draft leading up to it, that was evident the moment he hit the ice against the Moose Jaw Warriors for his WHL debut on February 4. Fluker’s ability to evade forechecking pressure and skate himself out of trouble was on display in all 10 of his games this season. He was also a contributor, and not a passenger, during his 10-game audition as he picked up five assists and a +6 rating in those 10 games. The smooth-skating defenceman is now back with his U18 Southwest Cougars as they get set to host the Western Regional qualifiers for the 2022 Telus Cup, which is being held in Okotoks, Alberta May 16-22.

The 2022 WHL Draft Lottery is being held this Thursday, April 21. The Broncos enter the lottery holding the fifth overall selection, and could move up to third if they win the lottery. They could also drop to sixth if the Regina Pats win. The 2022 WHL Prospects Draft will then take place on May 19, and the Broncos hold the following picks entering the draft:

*This pick was acquired from the Everett Silvertips in exchange for Kasper Puutio and Ethan Regnier (January 10, 2020)

** This pick was acquired from the Saskatoon Blades in exchange for Martin Fasko-Rudas (Januay 10, 2020)

Following the WHL Prospects Draft, the 2022 NHL Entry Draft promises to be one to remember for the Broncos organization when it gets underway at the Bell Centre in Montreal on July 7 and 8. The last NHL Central Scouting rankings in January had six Broncos on the list, but that could change by the time the next list comes out following the IIHF World U18 Championship.

The team will also host its annual MNP Alumni Golf Classic at Elmwood Golf Course July 23. There will be over $125,000 in hole-in-one prizes and much more. More details of the event can be found here.

Once that event is wrapped up, before we all know it, training camp in the fall of 2022 will be upon us and the next chapter in the history of the Swift Current Broncos will be written. The returning players will be hungrier than ever to improve and get the Broncos into the playoffs for the first time in five seasons, while new faces will arrive in Swift Current looking to make their mark.

We’re forever thankful for the support Swift Current and the surrounding communities have shown over these past two seasons. Welcoming you back to the Innovation Credit Union iPlex was long overdue and we can’t wait to do it again for 2022-23.