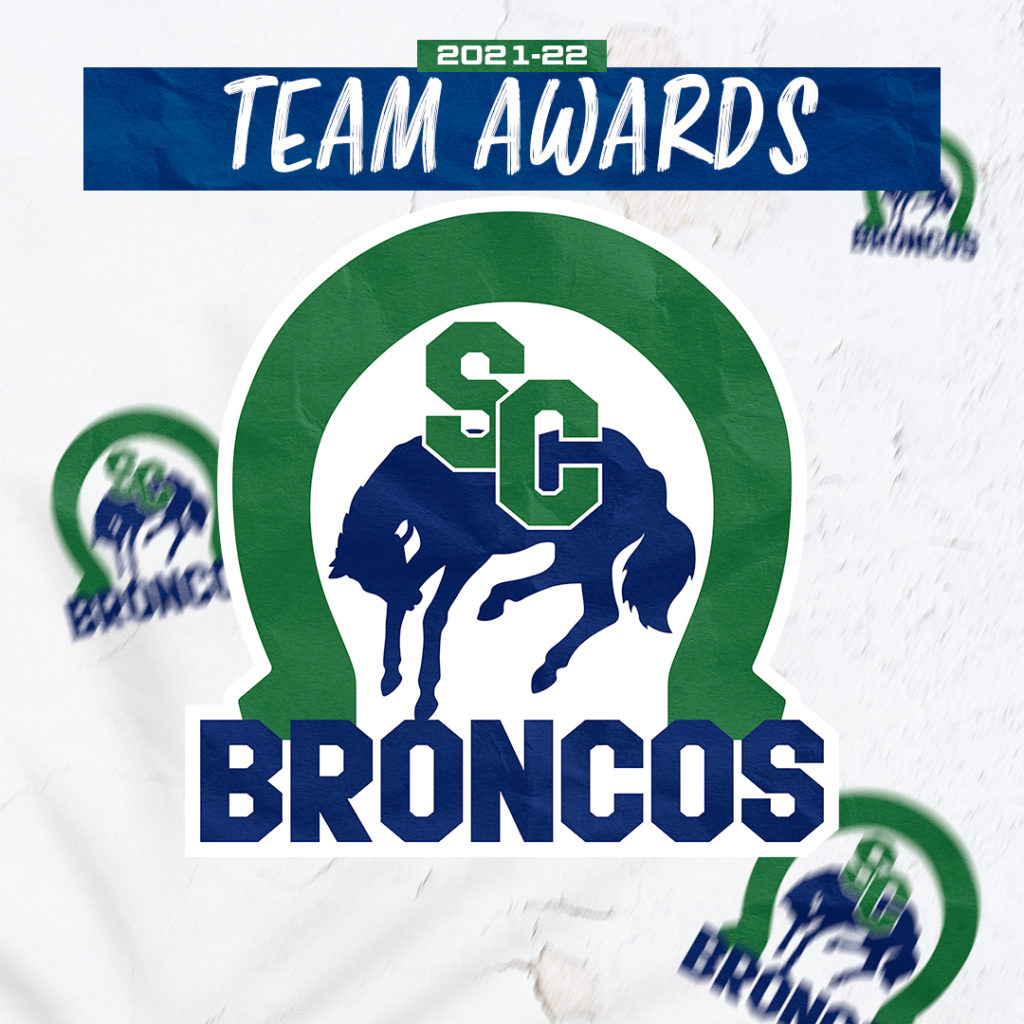 Swift Current, Sask. – The Swift Current Broncos announced their team award winners for the 2021-22 season Friday night. Four awards were presented live before puck drop against the Regina Pats and 11 more were announced throughout the game. Below is a list of winners.

For the third year in a row, goaltender Isaac Poulter was named the Broncos Humanitarian award winner. While the Broncos were limited in their community initiatives during the season due to Covid restrictions across the province, Poulter gladly took part in the Innovation iRead program to read to local elementary school students. Poulter’s desire and love for connecting with fans and children in the community, combined with his efforts on the ice has made him one of the most popular players in recent history.

Not only did Stebbings appear in all 66 games leading up to awards night, he also found himself in the penalty box just five times over the course of the 2021-22 season, recording 13 penalty minutes along the way. Throughout his 82-game WHL career to date, Stebbings has taken just five minor penalties.

A poll on scbroncos.com was up for fans to vote on for this year’s award, and Raphael Pelletier claimed honours in 2021-22 with 37 per cent of the vote. His relentless motor and consistent offensive contributions has won fans over in Swift Current.

Joining the team in late November, Shanaurin’s adjustment to the Western Hockey League was anything but easy. The 17-year-old forward was more than accepted by his new teammates and became a valued member of the team with his consistent upbeat attitude. The players vote on this award each year, and Shanaurin claimed this year’s honours in a landslide vote.

Though he was limited to about half a season worth of games due to various injuries this year, Lewis was trusted by the coaches in important situations while in the lineup because of his work ethic and selfless play. Whether it was taking defensive zone faceoffs or blocking shots, Lewis impacted the game in ways not often found on the scoresheet.

In his third season with the Broncos, Pelletier took an enormous step forward in all aspects of his game. Not only did he more than triple his point output from the previous season, he wore an ‘A’ on his jersey as part of the Broncos leadership group because of his non-stop motor. A leader both on the ice and in the room, Pelletier did it all for the Broncos in his 19-year-old season.

King of the Road – Caleb Wyrostok

An injury suffered in mid-February unfortunately knocked Wyrostok out of game action, but Wyrostok’s impact on the Broncos was felt all season long. Also given an ‘A’ at the beginning of the season, Wyrostok was a regular contributor offensively and an emotional leader on the ice. Never one to shy away from physical contact, Wyrostok’s growth will no doubt take another step forward when he returns to game action.

Chairman of the Boards – Josh Davies

A rare combination of speed and strength, opponents always have to be aware when Davies is on the ice. When he isn’t burning defenceman wide with his unparalleled speed or snapping off his pro-level wrist shot, Davies can often be found delivering thunderous body checks along the boards or in open ice.

Like most young goaltenders in the Western Hockey League, Dyck rode the roller coaster of ups and downs in his first full-length season in the WHL. Despite that, his attitude toward each and every day never changed. A consistent worker with a passion to improve, Dyck came to practice each day with a positive mindset and put in all the necessary work to handle the rigours of a 68-game season.

Due to the vast improvements within both of these players, it was impossible to name just one winner. After scoring two goals in 17 games during the shortened 2020-21 season, Filmon came to training camp in the fall and was an impact player from the start. Scoring more than 20 more goals as he did the previous season, Filmon became a go-to offensive threat for the Broncos in 2021-22 which has caught the eye of NHL scouts. While Filmon’s improvement came over the course of two seasons, King’s improvement from the beginning of the season to the end has been quite the story. After recording two assists in his first 27 games of the year, King found the back of the net for the first time on February 11 against the Brandon Wheat Kings. The goal clearly lifted an anvil-sized weight off the shoulders of the young forward as he went on a torrid scoring pace following that goal, recording 18 points over his next 21 games. That included a nine-game point streak leading up to awards night.

In his second season with the Broncos, Ward grabbed onto the scoring lead for the team early on and never looked back, scoring at nearly a point-per-game pace in the 2021-22 season. Entering awards night Ward had recorded 56 points (22-34-56) in 62 games. He will no doubt surpass the 100 career points mark early in the 2022-23 season.

Rookie of the Year – Connor Hvidston

A seventh-round pick in the 2019 WHL Prospects Draft, Hvidston’s transition to the WHL went smoother than the Broncos could have hoped for. After recording 11 points in the first 30 games of the season before the Christmas break, Hvidston came back in the second half and scored at a near point-per-game pace heading into awards night with 20 points in 26 games. Hvidston’s effectiveness in the faceoff circle also took a major step forward in the second half of the season, improving from 40.2 per cent before the Christmas break to 49.0 per cent afterwards.

One of the biggest draft steals in recent WHL memory, Pickering went from a ninth-round selection in the 2019 WHL Prospects Draft to a potential high round NHL Draft pick in just three years. After stepping into an immediate top-four role on the Broncos defence during the 2020-21 season, Pickering then became the number one defenceman for the team in 2021-22 despite being in just his 17-year-old season. Not only his he nearly quadrupled his offensive output from last season, going from nine to 33, he also logged heavy minutes for the Broncos all season long. Playing in all situations, Pickering has become a top-flight defenceman in the WHL in a short time and will be a pillar on the Broncos defence for years to come.

For the third year in a row, the obvious choice for the Broncos MVP went to their goaltender Isaac Poulter. Growing with the team through some challenging seasons, Poulter’s numbers in the 2021-22 season showcased the incredible talent of the Broncos’ #1 goalie. Recording a career-high in wins this season, Poulter shattered his previous career highs across the board in the 2021-22 season reflected the talent that had always been there. Recording more wins this season than he had in the previous three years combined, Poulter shattered his previous career highs across the board in 2021-22 while also climbing up the ranks of the Broncos record book. When the season is over, Poulter will likely rank tied for fourth in career games by a goalie, third in career minutes played and second in career saves. As reliable as they come on the ice, and a fixture during community visits by the team over the past four years, Poulter will undoubtedly go down as one of the most popular players in the history of the franchise.