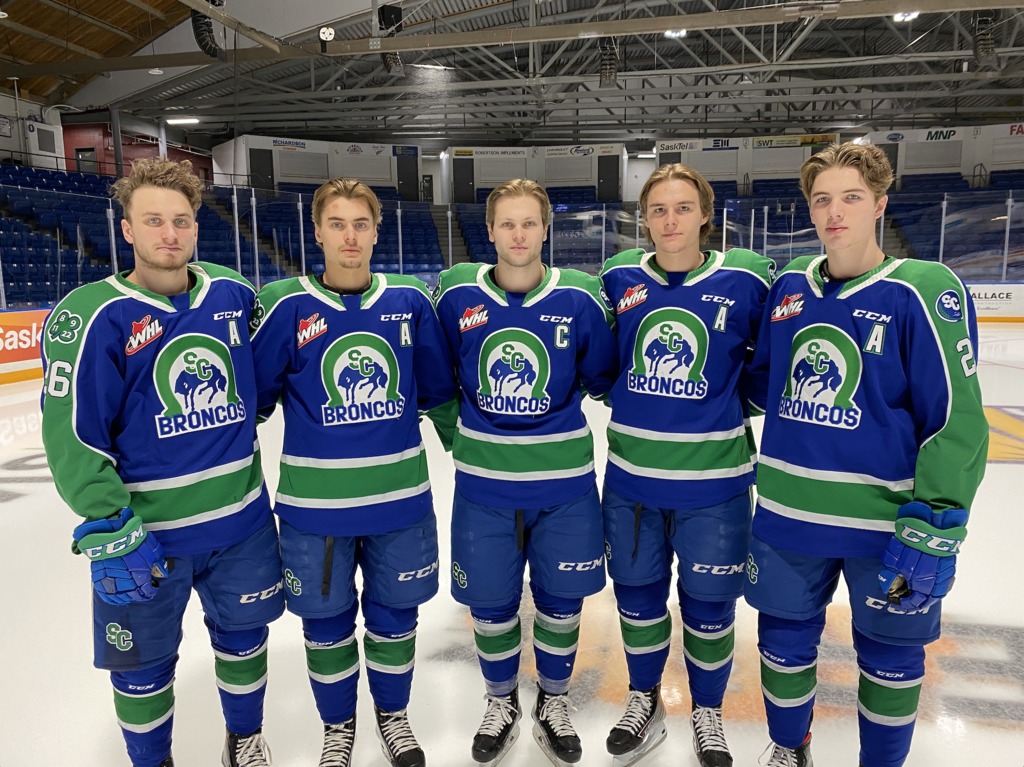 SWIFT CURRENT, SK  –  The Swift Current Broncos announced their new leadership group today, with 20-year-old forward Jaxan Kaluski being named the 33rd captain in Broncos history since their return in 1986.

Hayden Ostir, Eric Houk, Aiden Bulych and Hendrik De Klerk have been named alternate captains. Bulych will wear an ‘A’ during road games while Houk will wear one during home games. De Klerk and Ostir will wear them both on the road and at home.

Kaluski, from Lloydminster, is in his fourth and final season in the Western Hockey League with 158 games under his belt to date. He was signed as a free agent by the Broncos on November 6 and has posted career numbers with 13 goals and seven assists in 27 games.

Ostir, from Winnipeg, was also signed as a free agent by the Broncos October 12 and is the longest-tenured WHL player on the Broncos roster. Originally drafted 36th overall by the Spokane Chiefs in 2014, Ostir has skated in 225 games with the Chiefs, Medicine Hat Tigers and Broncos. This season he has five goals and eight assists in 30 games.

Houk, from Regina, is in his second season with the Broncos after signing out of the Regina Pat Canadians program last year. The 18-year-old forward has 92 games as a Bronco to his name with five goals and four assists.

Bulych, from Foam Lake, is in his rookie season in the WHL after playing in the SJHL last season. After 49 points in 58 games with the Yorkton Terriers, Bulych has adjusted well to the WHL scoring 10 times and adding six assists in 41 games this season.

De Klerk, from Swift Current, is also in his rookie season in the WHL after being acquired in a trade with the Spokane Chiefs before the season began. Even with just 40 games in the WHL, the 17-year-old defenceman has become a trusted fixture on the Broncos blueline by the coaching staff, while posting two goals and 10 assists.

The Broncos are next in action Wednesday when they welcome the Edmonton Oil Kings to the Innovation Credit Union iPlex.