Broncos cap off pre-season with 2-1 win over Lethbridge 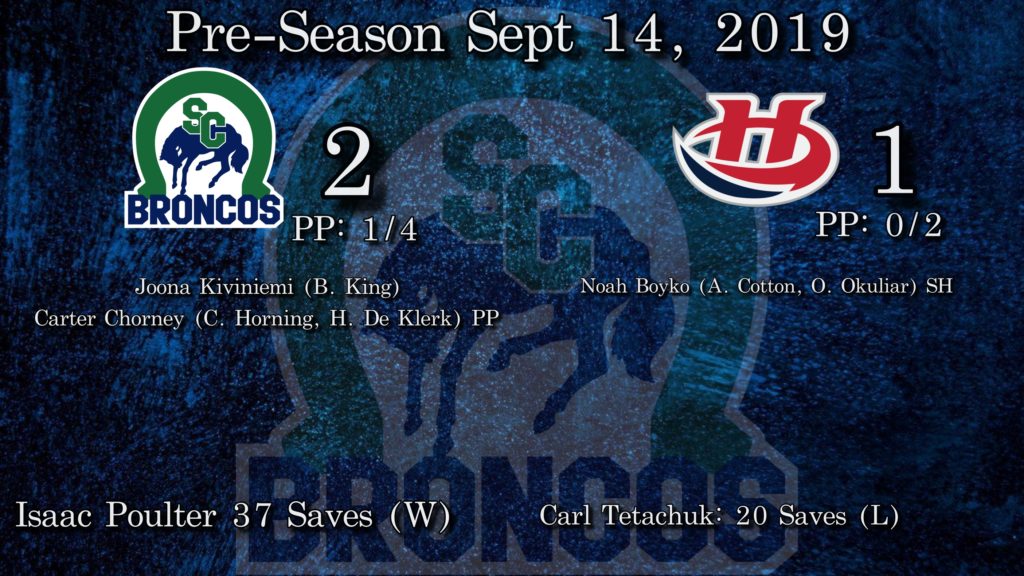 SWIFT CURRENT, SK – The Swift Current Broncos went undefeated in the 2019 pre-season following a 2-1 win over the Lethbridge Hurricanes on home ice Saturday night. The win give the Broncos a 5-0-0-1 record in the pre- season.

Just over four minutes into the game, Jake Kustra and Koletrain Wilson were ejected and given game misconducts for fighting. Wilson was given an extra game misconduct for leaving the bench to start an altercation.

Less than two minutes later, Joona Kiviniemi took a pass from Ben King behind the net and fired a shot off the mask of Carl Tetachuk and into the net to give the Broncos a 1-0 lead.

A few minutes later, while on the power play, Connor Horning slid the puck to Carter Chorney who dropped down to one knee and fired a one timer past the blocker of Tetachuk to give the Broncos a 2-0 lead. Tetachuk was lifted from the game following the goal, but would return to start the second period.

The Hurricanes ramped up the pressure during the middle frame, outshooting the Broncos 18-6 and eventually cutting into the lead.

While shorthanded, Alex Cotton led the rush into the Broncos zone and was hauled down, but the puck came to Noah Boyko who was able to lift it over the pad of Isaac Poulter to make it 2-1.

Despite great scoring chances at both ends, neither team would score again in the third period as the final buzzer sounded and the Broncos won 2-1.

Swift Current now gets set to begin the 2019-20 season when they host the Calgary Hitmen at the Innovation Credit Union iPlex next Saturday at 7:00.